For Calling Them Lazy and ‘KSP,’ Poor Filipinos Strike Back at Noli de Castro

“Maybe they are lazy. Tell them they are lazy. They should pay their loans. I will demand their payment or else I will drive them away, no matter who they are,” Vice President Noli de Castro replied when asked why poor Filipinos cannot pay their rent on time.

MANILA — The urban poor who were called lazy and “kulang sa pansin” (attention seeker) have warned Vice President Noli de Castro of the political costs of his “arrogance.”

On Thursday, de Castro who is also the chairman of the Housing and Urban Development Coordinating Council (HUDCC), broke into rage when a group of residents from Southville Relocation area in Cabuyao staged a rally while de Castro was then distributing Certificates of Entitlement for Lot Allocation or CELA to some urban settlers.

The residents shouted, “Noli, plague of the poor!”

Southville is one of the largest relocation areas in Laguna. The place used to be a dump before the National Housing Authority (NHA) turned it into a relocation area. 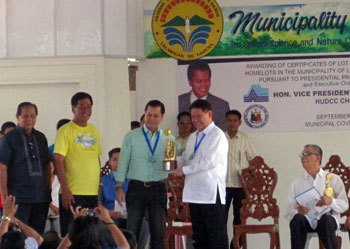 “The awarding of land titles is but a show off to mask the real state of the urban poor. De Castro is using phony land grants to cover up for the deep-seated problems they cannot resolve. These land titles are nothing but plain paper; they even become a form of business for the government as the relocatees are obliged to pay rent,” Bayan Muna-Southern Tagalog regional coordinator Ben Villeno said.

“How could he say that those who work for more than eight hours per day just to get a dismal compensation are lazy?” asked Christine Macabetcha, secretary general of Bagong Alyansang Makabayan-Southern Tagalog. The basic problem, she said, is that Southville residents live on a P100 per day for a family of six; they could not pay more than P300 monthly for the housing rent. 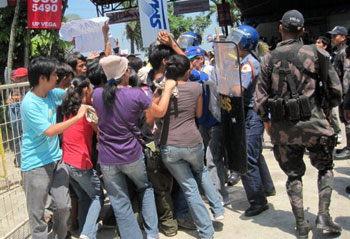 De Castro went on saying that the protesters were “KSP” (kulang sa pansin) or attention seekers.

Macabetcha said the poor seeks attention from the government because they are always neglected. “De Castro’s department even implemented bogus housing projects such as the Community Mortgage Program (CMP), which only gives false hope to the poor and serves as a business venture for some public officials,” she said.

Olarte cited a study by the Geneva-based Centre on Housing Rights and Eviction (COHRE) that at least 145,000 individuals or 29,000 urban poor families from Metro Manila and Bulacan have already been displaced since 2005 to make way for the anomalous North Rail-South Rail Linkage Project. No less than 80,000 families or 400,000 individuals will be affected once the project has been fully implemented.