For Calling Them Lazy and ‘KSP,’ Poor Filipinos Strike Back at Noli de Castro

Olarte added that none of the relocation sites promised by the government has had adequate facilities enough to call them decent homes. She said that the Southville relocation site lacks basic facilities such as hospitals and schools.

“Why would I say sorry? They should be the ones to apologize because they were rude to me,” de Castro said during his radio program Para Sa’yo Bayan over at radio dzMM Teleradyo on Saturday.

“I drove for 2 ½ hours to get to Los Baños and then they would insult me? Not because I’m vice president. I am a human… They are abusing the government housing program,” de Castro added.

“Many do not have houses of their own. If they do not want to pay, I tell them to just leave. We can get other squatter residents who are willing to pay to take your place,” he said. 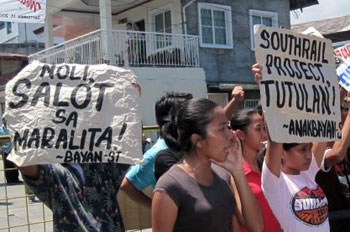 Kilusang Mayo Uno chairman Elmer Labog criticized de Castro. “Why threaten the urban poor with eviction? Such a threat can only show how insensitive Kabayan is when it comes to the plight of our urban poor kababayans.”

“After years of being a broadcaster and a politician, it is somewhat shocking to find out that Noli de Castro considers picket-protests as personal offenses to public officials. The workers and the people conduct protests because we have grievances that the government should address – such as when government agencies claiming to provide houses for the poor actually demolish the existing houses of the urban poor,” Labog said.

Labog added that after capitalizing on being a popular TV anchor before, de Castro has now unmasked his real self.

Labog said the workers and the urban poor will not forget the incident. “He is destroying what little electoral chances he still has,” he said, referring to de Castro’s political ambitions.

Bayan-ST’s Macabetcha said de Castro should dismiss any ambitions to run for president or any government post in the next elections because the urban poor will not support him.

“God save the Philippines from people like Noli de Castro. We vow to continue exposing his anti-poor record among our kababayans and to actively campaign against him this elections, whether he runs for president, vice-president or senator,” Labog said. (Bulatlat.com)