Migrante International promotes the rights of migrant workers, exposes anomalies in the government and has been very vocal in its stand against the intensifying labor-export policy of the regime. Through the Migrante Sectoral Party, Migrante promises to provide OFWs the protection that they deserve.

MANILA — Many politicians have guised themselves as “pro-overseas Filipino workers,” but with the disturbing number of these migrant workers beheaded and others still on death row, and with more and more of them seeking repatriation because of abuses by their employees, the promises these politicians make ring rather hollow.

“We know the characteristic of a trapo or a traditional politician. They are only there during the election campaign,” said Lian Santos of Migrante International. “Most of the time, the OFWs are only being used by these politician for pogi points.” 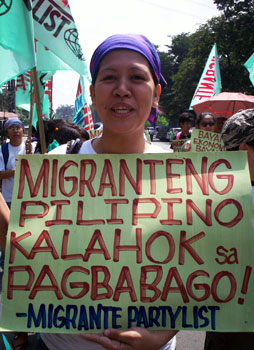 Migrante chairman Garry Martinez said there is a need for the government to push for laws that would protect and uphold the welfare of the OFWs. And such proposed laws have long been neglected since, as far as the government is concerned, the sending of OFWs abroad is an income-generating project.

Martinez said they have also received a number of feedback from their members urging and suggesting that migrant workers should be represented in Congress, saying they can no longer allow other people to speak for them. “We have to speak for ourselves,” Martinez said.

With this, the staff and members of the Migrante International marched toward the office of the Commission on Elections last week to file for its candidacy for party-list representative in Congress through the Migrante Sectoral Party (MSP).

The Migrante International is a progressive organization that consists of OFWs and their families. It has long been known to promote the rights of the migrant workers, expose anomalies in the government and has been very vocal in its stand against the intensifying labor-export policy of the present regime. Migrante promises to work hand in hand with the MSP to provide OFWs the protection that they deserve.

Should MSP get a seat in Congress, Santos said that they would be reviewing the pro-OFW laws that have already been passed but did nothing but to alleviate the worsening conditions of migrant workers.

For one, the MSP said it would work for the full implementation of the United Nation’s Convention for the Protection of the Rights and Welfare of Migrants and their Families. They will also work for the compensation of almost 47,000 Filipino Gulf War victims. 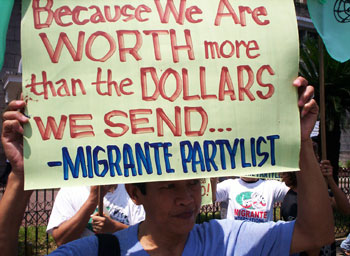 One of the simplest but most important reforms that MSP needs to address, according to Santos, is the Pre-Departure Orientation Seminar, which the government holds for departing OFWs. But the “PDOS primarily talks about how the OFWs can send their remittances,” and not so much on how they will come with the problems they face once they are abroad, Santos said. “So whenever they encounter problems, they do not know where they should go to ask for help,” he said.

Santos said there are certain provisions in the Magna Carta for Overseas Filipino Workers or Reublic Act 8042 that need to be scrapped as these give more protection to recruitment agencies rather than OFWs.

One of the reforms that MSP can legislate, Martinez explained, is to make illegal recruitment a non-bailable crime to make sure that the investments of the OFW will not go to waste.

Santos said they would also investigate concerned government agencies and offices and their projects and see if these are actually helping OFWs. He cited the Memorandum Order 248 that supposedly gives P50,000 worth of livelihood projects for retrenched OFWs. But Migrante criticized this order because availing of it entails too much requirements that, according to Santos, it would seem the government did not want to give out livelihood projects to OFWs in the first place.

In the long term, Santos said the MSP will push for laws that would help generate local jobs. “With this, the Filipinos are no longer forced to leave their families behind just to support their families,” he said. (Bulatlat.com)