In Pursuit of the Prophetic Mission

“UCCP: Sa Hamon ng Panahon,” a documentary-drama produced by Kodao Productions and directed by Bonifacio Ilagan, takes a searing look at the human-rights violations committed against members of the Protestant church.

With these words, which he uttered in an interview that is part of the recently launched documentary-drama “UCCP: Sa Hamon ng Panahon,” Bishop Eliezer Pascua of the United Church of Christ in the Philippines encapsulates the brand of faith that his church professes to.

Known as one of the largest Protestant churches in the Philippines, the UCCP has an estimated membership of 500,000 throughout the country as of 2008.

It is also the religious denomination with the highest number of members who have fallen victim to human-rights violations. There have been more than a thousand victims of extrajudicial killings in the Philippines, since 2001, when President Gloria Macapagal-Arroyo came to power through a popular uprising — 23 of them are members of the UCCP.

UCCP members have also been among the over 200 victims of enforced disappearances and over a thousand victims of torture for the same period.

The killings, disappearances, and other human-rights violations take place within the context of the government’s National Internal Security Program (NISP) dubbed as Oplan Bantay Laya (OBL or Operation Freedom Watch). OBL lumps together members of the underground Communist Party of the Philippines-New People’s Army-National Democratic Front of the Philippines (CPP-NPA-NDFP) and activists working with legal and progressive organizations as targets for “neutralization.” 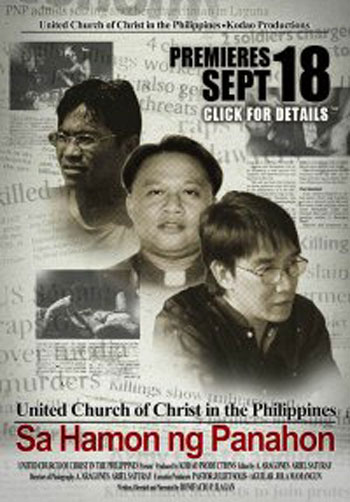 “UCCP: Sa Hamon ng Panahon,” produced by Kodao Productions, introduces the viewer to some of the church’s leaders who have fallen prey to this policy.

The documentary takes off with a dramatization of an incident in which two men on a motorcycle were caught by UCCP members while conducting surveillance on the church’s national office, formerly located in Quezon City. It then brings us to a scene showing police harassment of a pastor during a UCCP seminar in Roxas City, Oriental Mindoro, and then a dramatization of the killing of Renato Pacaide, a UCCP member who was also an Anakpawis (Toiling Masses) coordinator in Davao.

But the main subjects of the documentary are Joel Baclao, Pastor Edison Lapuz, and Pastor Berlin Guerrero.

Baclao, who was shot dead on Nov. 10, 2004, was the regional coordinator of the Promotion of Church People’s Response (PCPR) in Bicol. At the time of his death, he was also the coordinator of Andurog Bikol, a UCCP relief program for victims of the Mayon Volcano eruption. A week before his death, he had been warned by a certain Butch Javier that he should take extra caution because his name was already included in a so-called “list,” which human-rights groups believe to be a military Order of Battle.

Lapuz was a founding member of PCPR. He was also the coordinator of the Eastern Visayas conveners of the UCCP’s Visayas Jurisdiction, as well as conference minister of the church’s Northeastern Leyte Conference. Aside from all these he was the main convener of the Justice for Attorney Dacut Alliance, a campaign for slain human-rights lawyer Felidito Dacut. Lapuz was slain on May 13, 2005, after attending his father-in-law’s burial. Before Dacut was killed, his name had reportedly been found included in a military Order of Battle.

Guerrero was abducted by armed men on May 27, 2007, in Biñan, Laguna after officiating a service at the local UCCP church in a village called Malaban. His wife and one of his sons tried to intervene, asking the armed men for a warrant of arrest, but were shoved aside. He was brought to a safehouse, where he was repeatedly tortured while being forced to admit he was a high-ranking CPP official in Southern Tagalog. The next day he was brought to the Philippine National Police’s Camp Pantaleon Garcia in Imus, Cavite, where lawyer Emilio Capulong and a UCCP team found him. Capulong and the UCCP team were given facsimile copies of arrest warrants for Guerrero, based on inciting to sedition and murder charges dating back to 1988 and 1992, respectively. The cases were dismissed on Sept. 23, 2008.

Their stories are dramatized in the documentary-drama, with Guerrero and his wife and children themselves acting out their parts.

The dramatizations are interspersed with narration from award-winning writer Bonifacio Ilagan, who also wrote the script and directed the video; as well as interviews with Pascua and the members of the Guerrero family; and the relatives, friends, and colleagues of Baclao and Lapuz.

The narration helps place the dramatizations within a clearer context. Ilagan’s tempered voice strikes a balance to the heaviness of the material and the emotionally charged testimonies.

Jola Diones-Mamangun is the documentary-drama’s executive producer. A. Aragones and Ariel Saturay are directors of photography. The video was launched last Sept. 18 at the Bantayog ng mga Bayani. (Bulatlat.com)