According to Monsignor Walter Cerbito of the diocese of Catarman, Northern Samar, nobody is safe anymore in his province, not even priests, as the militarization intensifies. The murder of the Reverend Cecilio Lucero only underscored the worsening human-rights violations there.

MANILA – A historic meeting on Saturday of about 250 Catholic priests from all over the country urged the Arroyo government to conduct a thorough investigation into the murder of the Reverend Cecilio Lucero, the parish priest of Catubig, Northern Samar. In a mass led by Gaudencio Cardinal Rosales, the priests also dedicated prayers and called for justice for all victims of extra-judicial killings in the country.

“Our province is becoming a killing field — nobody is safe, not even priests,” Monsignor Walter Cerbito of the diocese of Catarman, Northern Samar, told Bulatlat on the sidelines of the unprecedented three-day national assembly of Catholic priests. It was an occasion for “national discernment on their prophetic role.”

Serving in the diocese of Catarman since it was formed 33 years ago, Monsignor Cerbito said his province is still reeling from the shocking murder of Father Lucero, a popular human-rights advocate, but already another person, Ruth Gecaro, who had been with Father Lucero two days before he was murdered, was abducted allegedly by the military.

With two military battalions stationed in Samar, plus the mobile police force and the paramilitary groups before and after Father Lucero’s killing, Samar is highly militarized, said Monsignor Cerbito. “There are pronouncements from the military that they consider Northern Samar as the last stand of the communist insurgency in Samar – we started hearing that last year,” said Monsignor Cerbito, adding that they fear more human-rights violations might occur because of the 2010 deadline given on the military to “crush the insurgency.” 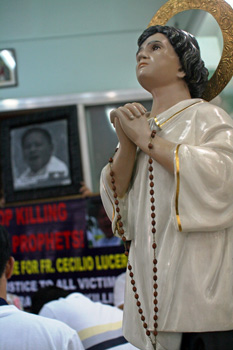 On Saturday, 40 days have passed since Father Lucero’s murder but Monsignor Cerbito said they feel the current investigation into the killing being undertaken by the local police in Samar seems headed nowhere. That’s why on Monday, Oct. 19, after coming home from their national assembly in Makati, the Catholic priests of Samar will hold a rally in Samar to demand justice for the fallen priest.

“In the rally, we will have a signature campaign, for our appeal to DOJ (Department of Justice) and GMA (President Arroyo) for an impartial investigation,” said Monsignor Cerbito.

They plan to hold two simultaneous caravans on Oct. 19, one of which would stop for a candle-lighting ceremony at San Jose where Father Lucero was slain and where the people have put a landmark. The two caravans would meet in Catarman for a mass-rally for justice and peace.

With the rally, the priests hope the police would be persuaded to reveal the results of its “investigation.” While its details remain “secret” up to now, the priests were saying that the local police are not pursuing the angle of Father Lucero’s active involvement in the diocese’s human-rights desk, or his having been tagged as a communist because of his human-rights advocacies, as likely motives for his murder.

Call of the Day

Prior to his murder, Father Lucero was chairman of the Human Rights Desk of the Church’s diocese in Catarman as well as parish priest of Catubig.

“We’ve had an active Human Rights Desk during Martial Law – we reactivated it five years ago because of the demand of the situation. That is the call of the day. Farmers, people of the barangay, victims of militarization — they go to us,” said Monsignor Cerbito.

In their Human Rights Desk, they document cases of evacuation as a result of militarization, encounters between military and the people, cases like arrests, disappearances, and extrajudicial killings. Just this year, Monsignor Cerbito said they have documented approximately 20 cases of human-rights violations in Catarman alone.

After documenting and filing a police blotter, Father Lucero would call the military for a dialogue. But mostly, despite claims of witnesses, the military denied involvement during the three dialogues Father Lucero had arranged, Monsignor Cerbito said.

“The death of Father Lucero has given me more courage to do our job. The situation itself calls for involvement of the priests,” Monsignor Cerbito added. He had thought theirs was an isolated case, until he attended the national assembly of priests’ working together to discern their role as “prophets and stewards” in these trying times.

“It inspires us that we are not alone. Other clergies have testimonies similar to ours. It gives me more courage,” he added.

The CBCP-National Secretariat for Social Action has condemned the killing of Father Lucero and asked the government and the law enforcement agencies to “ensure a thorough, prompt and impartial investigation.”

According to Monsignor Cerbito, Father Lucero’s murder has prompted even the Pope to send a letter to the bishop of Catarman denouncing the killing.

In Catarman, there would be a tolling of bells every 12 noon and 8 in the evening. People would also wear black in all churches and diocese for one year. In all churches in Catarman, there are streamers with pictures of their parishioners calling for justice for all human-rights victims. October 2009-2010 will be declared as year of peace and justice for the whole Catarman diocese, Monsignor Cerbito said.

“The time for political statements and assurances has passed,” the CBCP-NASSA’s statement said. “Only the swift delivery of justice will lend any credence to the authorities’ supposed commitment to justice.” (Bulatlat.com)