Like the Moro in many parts of Mindanao, evacuation has become a way of life for the Lumads . They would rather sleep in schools, at village halls or town gymnasiums than stay in their villages and bear the brunt of military operations.

DAVAO CITY – The image of a soldier shooting a villager clambering upon the back of an open truck is still fresh in the minds of the Manobos when they left their homes in Barangay Diatagon in Lianga, Surigao del Sur in July this year.

Though it happened four years ago, the Lumads have not forgotten Jessie Bacasmas, a farmer shot on May 12, 2005 as they, the Lumads, were about to leave the village upon the arrival of soldiers.

Like the Moro in many parts of Mindanao, evacuation has become a way of life for the Lumads . They would rather sleep in schools, at village halls or town gymnasiums than stay in their villages and bear the brunt of military operations.

Memories of past abuses have sent them fleeing their villages at the mention of the coming troops.

As the 2010 deadline of the Philippine military to end Asia’s longest running communist insurgency nears, the evacuation of Lumads intensifies.

They take place in Arakan town in North Cotabato and in Matanao, Davao del Sur, according to the Indigenous Peoples Rights Monitor (IPRM) report in Mindanao. The Ata-Manobos in Talaingod, Davao del Norte and the Mandayas in Baganga, Davao Oriental also face threats of displacement, the IP rights watchdog said. 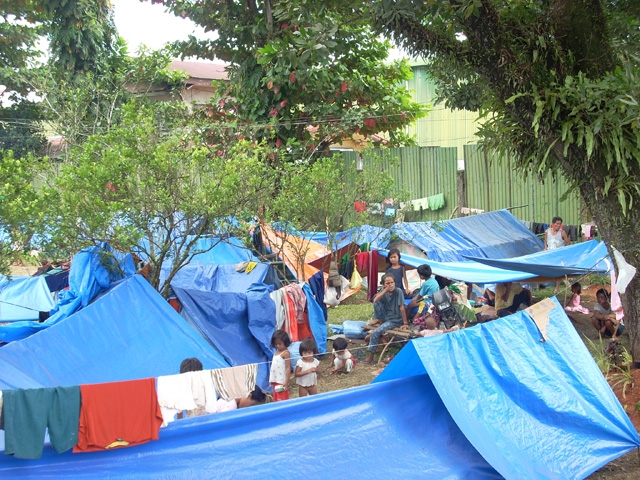 Hundreds of Lumads from Lianga, Surigao del Sur, sought refuge at the diocese grounds after they were displaced from their homes early this year. (Photo courtesy of EMJP)

An estimated 400 Lumads from the villages of Sto. Niño, Tumanding, Mari Caridad, Kinawayan, Kabantian, Duruluman, and Malibatuan in Arakan town left their homes when 57th IB soldiers arrived in their villages in August. The Lumads took refuge at the Arakan gym, the IPRM reported.

In Matanao, Davao del Sur, 500 people fled their homes in the first week of August as troops of the 39th IB entered the B’laan communities of Datal Fetak, Purok 1 and Purok 2, Gopkalahan, Bantong, Datal ’ta and Sultana, all part of the villages of Dungan Fekong and Colonsabac.

Since mid-August, Ata-Manobos in Talaingod town of Davao del Norte have been restless after soldiers belonging tothe 60th Infantry Battalion of the Philippine Army arrived in their communities, particularly in Sitio Dulyan and Sitio Nasilaban in Barangay Palma Gil.

Fear has also gripped the Mandaya communities in Baganga town in Davao Oriental as troops of the 67th Infantry Battalion have been staying in the villages since July.

The stories of the Lumads are almost the same.

The Manobos in Lianga said the military treated them as “enemies.”

According to villagers interviewed by Davao Today, the soldiers who came to Diatagon set up checkpoints near their houses as soon as they arrived. The soldiers also prohibited every villager from bringing more than three kilograms of rice from town to their communities.

“The soldiers suspect that we are feeding the rebels,” Genasque Enriquez, a Manobo from Kilometer 9 Emerald of Barangay Diatagon told a press conference in Davao City.

Enriquez, an officer of the Lumad organization called Malahutayong Pakigbisug Para sa mga Sumusunod (Sustainable Struggle for the Next Generation) or Mapasu, also said soldiers even tagged the alternative school of Lumads based in the village’s Sitio Han-ayan as a “communist front” and demanded from the school director the names of the 124 students.

But school director Marife Magbanua stood her ground and refused. “The military accused us of teaching students to become NPAs. This is a big lie!” Magbanua said.

Lumad organizations in Diatagon, with the help of the Diocese of Tandag, put up the non formal school Alternative Learning Center for Agriculture and Livelihood Development when students who graduated from the elementary curriculum of the Tribal Filipino Program in Surigao del Sur (Trifpss) in the 15 communities in Diatagon needed to enter higher education.