You Are Here: Home → 2009 → October → 26 → Distressed OFWs in Maldives Return Home, No Thanks to Philippine Government

Distressed OFWs in Maldives Return Home, No Thanks to Philippine Government

MANILA — Dollar remittances from overseas Filipino workers (OFW) are the lifeblood of the Philippine economy. They are the country’s biggest source of dollar revenues, surpassing earnings of the export sector. They also stimulate domestic consumption.

One would think that, with all the billions of dollars in remittances that it rakes in, the government would be concerned enough about the plight of distressed OFWs and ensure that those who want to escape from their abusive employers abroad can easily go back home to safety.

In the case of 42 distressed OFWs in the Maldives, they only managed to come home because of the efforts of the government of that country, not the Philippines, according to Migrante International. Garry Martinez, Migrante International’s chairman, said the government of the Maldives responded to the plight of the distressed OFWs probably because it was embarrassed by what its citizen did to the Filipinos. “But our government seems not to be ashamed that we are becoming beggars in other countries,” he told Bulatlat.

“We are the so-called modern-day heroes. But look closely because we are neglected heroes,” Abraham Sanchez said during a protest action early this month in front of the Overseas Workers’ Welfare Administration (OWWA) office in Pasay City. 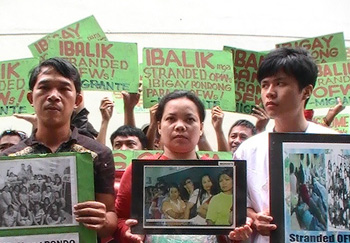 OFWs from the Maldives demand the repatriation of more of their distressed fellow Filipinos. (Photo by Janess Ann J. Ellao / bulatlat.com)

Sanchez has a degree in architecture. Although he did not pass the licensure examination, managed to support his family. It was not, however, enough to provide for a better future for his two children. So, in March 2008, he went to the Maldives to work for a construction company there,

Unfortunately, Sanchez and 41 other OFWs were in for a tough time in the Maldives, a prime tourist destination known for its resorts. “We were promised decent work with good salary. But since we arrived in the Maldives, we experienced nothing but hardships,” Sanchez said. He was one of the 300 OFWs who were earlier reported to be experiencing difficulties in the Maldives and were seeking repatriation. https://www.bulatlat.com/main/2009/09/10/trouble-in-paradise-for-300-filipino-workers-in-the-maldives/

The OFWs who went to the Maldives had signed a 15-month contract with their employer, Ashley Builders Corporation, stipulating that they would be given a monthly salary of $300 with free food and accommodations. However, since they began working in April last year, the OFWs never received their salaries. To survive, they had to drink rain water and catch fish to eat.

“We asked our agency if we could go home. But we were told that should we resign, we would have to pay for our own airplane tickets and the fare of the person who would be replacing us,” Sanchez told Bulatlat. But sensing the hopelessness of staying in their work place, some of them went to Mali, a city in the Maldives. There, they caught the attention of the Maldives government. 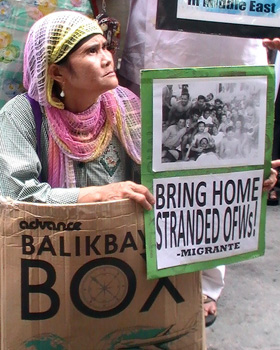 A supporter of the distressed OFWs rally in front of the OWW office. (Photo by Janess Ann J. Ellao / bulatlat.com)

The Committee on Human Rights of Maldives immediately arranged for the OFWs’ trip back home. Sanchez said the Labor Relation Authority in that country bought airplane tickets for them amounting to P13,000 each. In addition, the International Red Cross gave the OFWs about P1,200 each, which, according to Sanchez, they were able to spend on food and other necessities. “There were also Filipinos working in hotels in Mali who extended help to us,” Sanchez said.

On Oct. 3, Sanchez and the rest of the 42 OFWs went to the OWWA, which gave Sanchez P800, enough for his trip back to his province. They were also told that they should file a formal complaint before the Philippine Overseas Employment Association (POEA) should the OFWs want to seek redress for what happened to them in the Maldives.

On Oct. 19, the 42 OFWs, together with Migrante International, went to the POEA to file administrative cases against the local agency Mayon View International Manpower Services, which deployed them to the construction company in the Maldives. Martinez said the license of the agency should be immediately revoked.

“We are also preparing to file criminal charges. The OFWs are currently preparing their statements as required by our legal counsels,” Martinez said. There are still more than 200 distressed OFWs left in the Maldives, he added. (Bulatlat.com)