You Are Here: Home → 2009 → October → 26 → Help Comes to Devastated Folk of Laguna Town but They Fret Over What Comes Next

With the flooding after Ondoy and the blaming of poor peasants and fisherfolks around the Laguna de Bay, many in Pila, Laguna, fear that the demolition of their homes is now just a matter of time.

PILA, Laguna — “It’s raining again!” a man shouted. Normally, people would run for the nearest shed at the slightest drizzle. But on this day, they stood still in line as the Bagong Alyansang Makabayan, the umbrella group of progressive organizations, gave out relief packs in this town, one of the worst hit by the flooding caused by Ondoy. It had been one of the few instances that help was offered to them since the storm devastated their community a month ago.

All in all, Bayan’s relief operation, in which they distributed about 2,000 relief packs, helped the residents of four barangays that were greatly affected by the typhoon.

Rosita Porcincula, 70, has been living in barangay Balanga since 1956. She has witnessed several typhoons that hit their community. But she said Ondoy was definitely different from all that she had went through. What remained the same was how the government responded to the recent disaster. 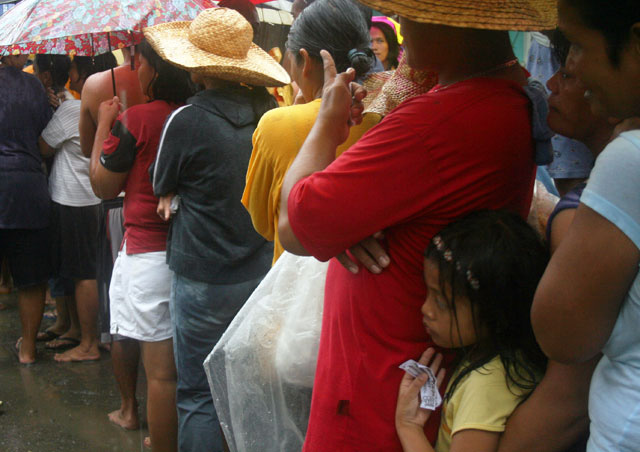 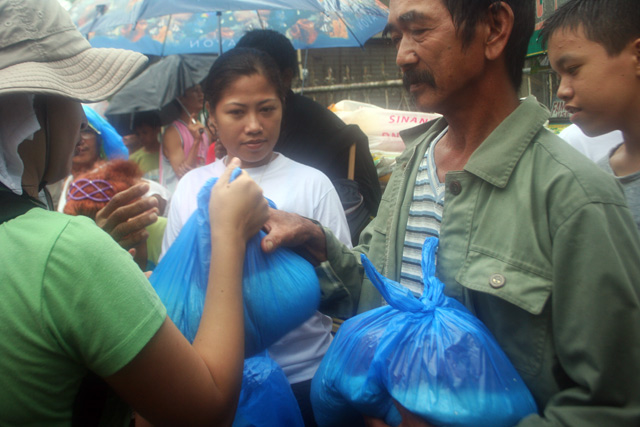 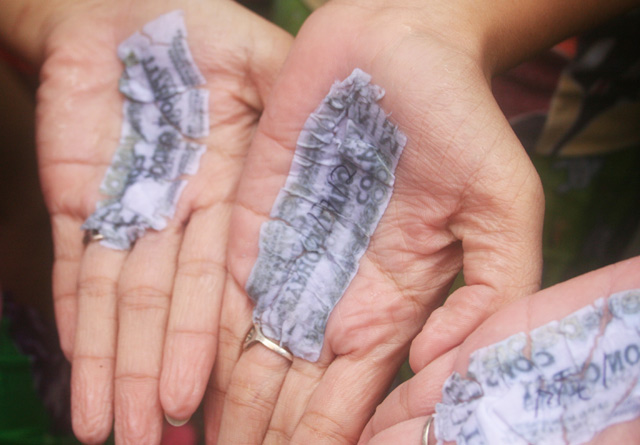 Residents of Pila Laguna line up for relief goods from Bayan. In bottom photo, a resident shows their relief coupons. (Photos by Angelica de Lara / bulatlat.com)

She said the government had not promised them any help, considering that they lost almost everything that they owned. In the one event that President Gloria Macapagal-Arroyo came to town to supposedly show her concern over the calamity, Porcincula said the president left without finishing the program. “They gave away 150 packs of relief goods. But right after the 20th family or so, Arroyo left. Her cohorts remained to finish the relief distribution,” she said.

Porcincula said affected families have been on a “strict budget” when it comes to consuming the contents of the relief goods because help rarely came to them. The communities have been relying on relief operations such as those conducted by Bayan for food since most of their livelihood were destroyed.

For 45-year-old Danilo Bacurin, a resident of Barangay Bagong Pook, the relief goods that were distributed by the government were not enough. He said seedlings could have been a perfect relief item for them since most of the families living in Pila are peasants and fisherfolk. Bacurin said the flooding took part of the land that he has been tilling for five years now. “The seedlings could have been food for our family,” he said.

These days, the residents of this town are not only concerned about their day-to-day survival, as many of them reel from the impact of the calamity. On top of the problems created by Ondoy and the government’s inadequate response, there’s the constant worry about that the future would bring to them.

The Napindan Hydraulic Gate is an infrastructure installed after martial law, supposedly to control the water of Laguna de Bay from flooding Metro Manila should heavy rain and flooding occur.

Aside from the Napindan Hydraulic Gate, the issue of demolition of families living along the Laguna de Bay has also been raised. “They want to turn the vicinity of the lake into an income-generating project,” Criste said, adding that should the project continue, fisherfolk would no longer be allowed to fish in the lake. “Only foreigners and government officials like Arroyo would profit from this project,” Criste pointed out.

Criste told Bulatlat that in 1994, markers were installed within the vicinity of Laguna de Bay, about 100 meters away from the water. From that marker, everything within 60 meters would be demolished. “The homes that they would be demolishing are houses of poor families,” Criste said. “It includes small businesses like variety stores and bakeshops. Should they have a relocation site, it would still be hard for them since most of their livelihood depends on the lake.”

Criste said that a notice of demolition was given to their barangay last Sept. 8. And with the flooding of Metro Manila after Ondoy and the blaming of poor peasants and fisherfolks around Laguna de Bay, he fears that the demolition now becomes imminent.

“They would certainly receive strong opposition from the masses should they continue the demolition,” Criste said, adding that the people of Pila are still recuperating from the calamity and the last thing they need is for their homes to be destroyed. (Bulatlat.com)t