MANILA – When President Gloria Macapagal Arroyo signed into law last week Republic Act No. 9729, Philippine Climate Change Act of 2009, she did it with much funfare. The country was still reeling from the effects of typhoons Ondoy and Pepeng and the president enacting a law that would ensure such a calamity won’t happen again was probably the most reassuring and comforting thing devastated Filipinos would like to hear.

While the intent of the law, on paper at least, seemed noble, the Arroyo administration will have to work extra hard to prove that it is sincere in addressing climate change and its impacts. Signing the climate-change bill into law is one thing – approving the operation of coal-fired power plants, which have been identified as one of the dirtiest power-generation methods, undermines it.

Apart from RA 9729, the Philippines is bound by the number of international treaties on climate change that it had signed. Only recently, Arroyo sent Heherson Alvarez, her adviser on global warming and climate change, to the United Nations Framework Convention on Climate Change to reaffirm her regime’s commitment.

But this year alone, at least nine new coal-fired power plants were built in various parts of the country, according to the Kalikasan People’s Network for the Environment. 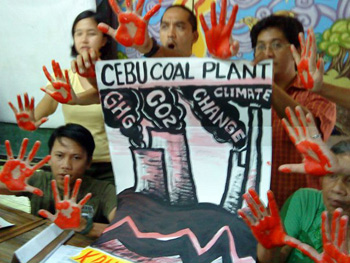 “We have agreed to push for the development of renewable sources of energy. But despite this, the present regime has continued to allow sources of energy, like coal-fired power plants, that are deemed and proven the dirtiest,” said Meggie Nolasco, spokesperson of the Philippine Climate Watch Alliance.

Geologist Ric Saturay of the Center for Environmental Concerns said that coal-fired power plants are considered to be convenient because they are the cheapest source of energy. But these pose considerable environmental and health risks for communities near the power plant. The ashes that are the power plant’s solid waste have higher toxic concentration than unburned coals.

Since coal is carbon-based, it will release carbon dioxide into the atmosphere, which in turn contributes to global warming and, consequently, climate change.

In La Paz, Iloilo, communities are concerned with how a coal-fired power plant ran by the Global Business Power Corporation would affect a community just 500 meters away from it. In an environmental investigation mission last Sept. 14 to 15 in Iloilo, Saturay ang his colleagues found out that the power plant plans to dispose its ash wastes into what used to be a fish pond. He said the waste could contaminate the ground water and even the marine life in the Jaro River and Iloilo Strait since the power plant is located near these bodies of water.

“The company claims that the ash pond will have a dense lining to prevent leakage,” Saturay said. But he pointed out that in other countries, such as the United States, ash wastes are disposed of in a sanitary landfill. “A landfill has more sophisticated facilities that can mitigate leakage but it is also more expensive,” Saturay said. “Apparently, the company is not committed to the best practices for coal-waste disposal to ensure the safety of the immediate community.”

Saturay said the company did not study the capabilities of the ash pond and the leakage rate in case of a leak. “There were also no analysis on the hazards posed to those who would be affected by the toxic wastes. They do not have any data on the nearest water wells where people get their water supply, the marine ecosystem near the power plant that would be disrupted and how sensitive they are to changes in temperature,” he pointed out.

The mission also found that approval of the project had been easy, with requirements for such documents as the Environmental Compliant Certificate rather lax, Saturay said. “They do not even require a building permit,” Saturay said.

Coal-fired power plants require a generous amount of water to cool down their machines. Saturay said the slightest change in temperature in a marine area could cause coral bleaching, change in migration patterns of marine organisms and even their spawning behavior. “How much more if the water released from the power plant that was used to cool it down would be dumped into this area?” he asked.