You Are Here: Home → 2009 → November → 1 → Filipino Nurses in Canada Vulnerable to Exploitation, Misleading and Abusive Policies

Filipino nurses have the longest record of migrating, as well as the longest history of abuse. This abuse is a result of aggressive, profit-driven, exploitative policies of both their point-of-origin and destination countries. One of these is Canada, one of the most popular destinations now for Filipino nurses.

Sidebar: Filipino Nurses in Canada — In Search of a Better Life (An Interview with Evelyn Calugay) 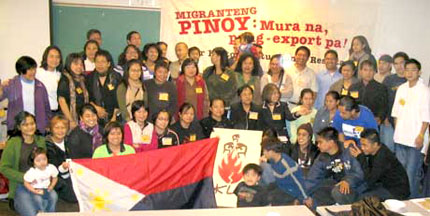 ALBERTA, Canada — When the United States shut its door to foreign nurses in 2008, many turned to Canada. Also a First World country with a large number of nurses due to retire soon, Canada is now fast becoming a leading destination for foreign nurses, particularly Filipino nurses.

The Philippines is known as the world’s leading exporter of nurses. The trend began in 1960s when its government minted a labor-export policy to help keep its economy afloat. It resulted in its own healthcare system suffering a “national haemorrhage” as more health professionals leave in droves for “greener pastures.”

But the Filipino nurses who migrated to countries with a shortage of nurse, such as Canada, are also being exposed to exploitation, misleading integration programs and policy changes.

Some 240,000 immigrants are entering Canada every year since 1992, said a study on internationally educated nurse published by the Canadian Nurses Association (CNA) in 2005. It cited the Philippines as one of Canada’s top five sources of immigrants.

Another study on global migration in 2003 reported that Philippine-trained nurses comprised the largest group of internationally educated nurses in primary “receiving” countries such as Canada. Mostly women, they have been entering Canada through its Live-in Caregiver Program (LCP). Regulators suggested that many of the LCP applicants were educated as nurses but came to Canada hoping to be licensed as nurses when they complete their LCP obligations, the report said.

Caregivers under the LCP can apply for permanent residence in Canada after working two years with their employers. But it can be tricky for internationally educated nurses who entered Canada under LCP because most of the nursing regulatory bodies require an average of 1,125 hours of practice as nurse, not as caregivers, in the last three to five years for them to keep their status as nurses, noted the CNA. Add to that the fact that there are immigration backlogs, and the assessment period and time it takes to acquire identified deficiencies in education take one to two years.

Daisy Webster, 39, a Filipino who is now a Canadian citizen, exemplifies the migrant nurse who must take a long route before becoming a registered nurse in Canada.

Webster graduated from nursing in a community college in the Philippines in 1986. But she found no chance to practice nursing back home “as nursing jobs were very scarce and too many nurses were applying.”

She worked for four years as a domestic helper in Hong Kong, then used the experience to enter Canada as a caregiver, where she worked for another two years. “Being a caregiver was very challenging. I looked after my employer’s children, making sure they were safe and fed while I was also doing household chores,” she said.

Then Webster had to work as nurse attendant, take a Refresher Course and pass the Canadian Registered Nurse Exam, before she became a registered nurse at a regional hospital.

Every year since 2001, caregivers coming from the Philippines to work in Canada are increasing by 26 percent. In 2007 alone, there were 4,170 Filipino caregivers deployed to Canada.

Another Tactic to Exploit Nurses

Such is the looming shortage of nurses in Canada that many of its provinces have been trying to fill it up even as they are striving to cut costs. Maximizing the pool of internationally educated nurse was reiterated in a 2005 CNA report. Some provinces have begun scrambling for these nurses. Saskatchewan brought 72 nurses from the Philippines this year, the third batch since 2008. British Columbia poached 521 nurses from the United Kingdom.