As if the trauma of losing their homes and belongings were not enough, evacuees at the PhilSports Arena, formerly known as the Ultra, faced more problems as the government seemingly backtracked on its promise to relocate the displaced families. Worse, the Pasig government allegedly had to use underhanded means to force the refugees to leave.

MANILA — Not too long ago, Vice President Noli De Castro, who also chairs the Housing Urban Development Coordinating Council (HUDCC), proudly announced that there are 1,400 houses available that may be used as relocation sites for displaced victims of typhoon Ondoy. He said there are also 5,721 lots that may be developed to accommodate the displaced families. This is supposedly the government’s solution to the problem of families living along riverbanks and waterways, which are considered as “danger zones.”

But as if the trauma of losing their homes and belongings were not enough, evacuees at the PhilSports Arena, formerly known as the Ultra, faced more problems as the government seemingly backtracked on its promise to relocate the displaced families.

“We still have not heard updates from the National Housing Authority (NHA) regarding the relocation sites,” a staff of the Department Social Welfare and Development (DSWD) in the evacuation center, who refused to be identified, told Bulatlat.

As a result, the evacuees were forced to choose between two options being offered by the Pasig local government: Balik Bahay or Balik Probinsya. With Balik Bahay, the families would be given roughly P1,000 to P2,000 ( $21 to $42) and with Balik Probinsya, the amount to be given would depend on the cost of the fare going back to their respective home provinces.

But not everyone had a choice. Maritess Ornada, 32, told Bulatlat they had no home to go back to since their house, which was situated along the riverbanks of Pasig River, and their belongings were destroyed by the floods that accompanied Ondoy. They also could not avail of the Balik Probinsya scheme since their province in Northern Samar was also devastated by the typhoon. 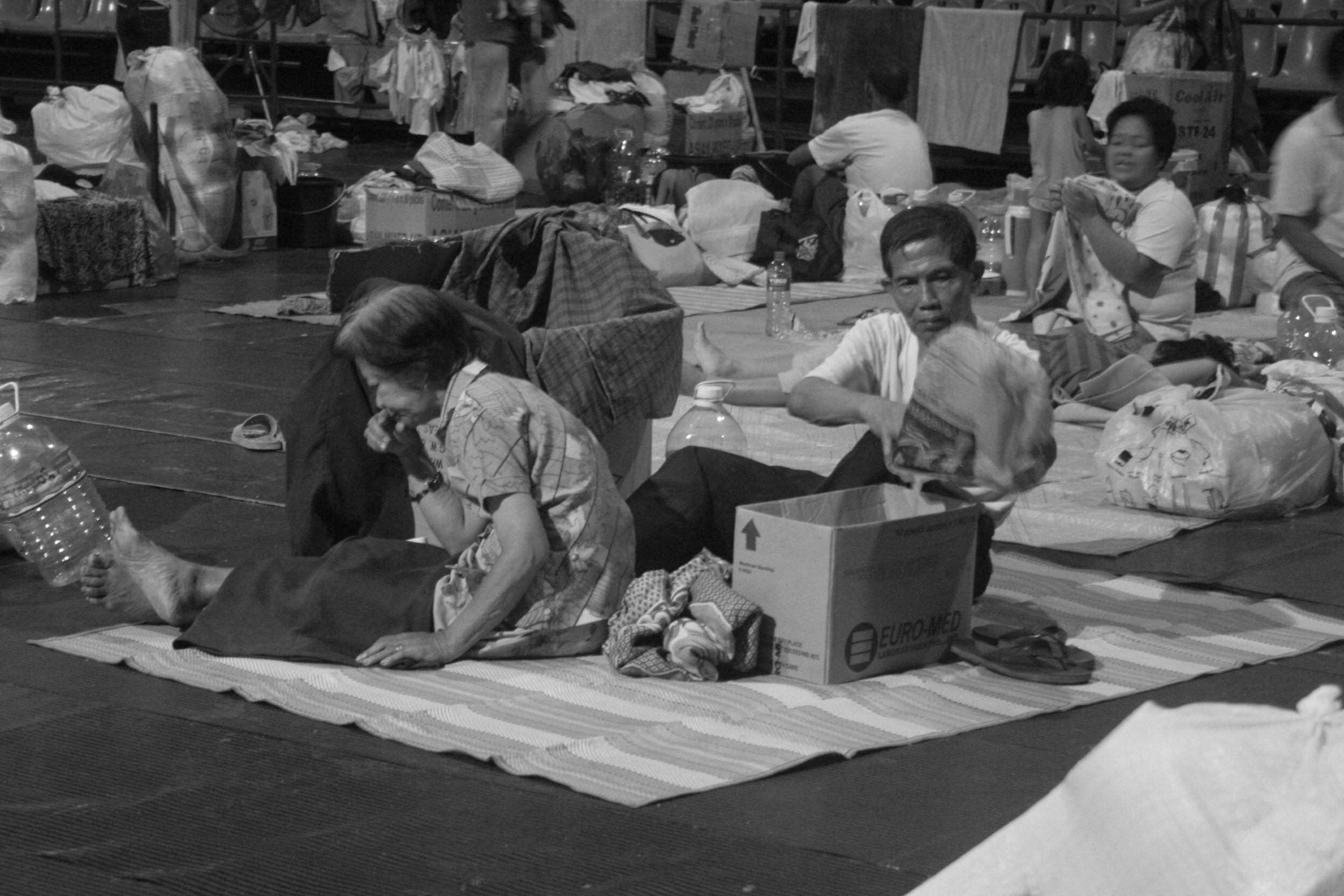 “We are still hoping for the relocation,” she told Bulatlat. But since they had nothing to hang on to but empty promises, they might avail of the Balik Bahay scheme. The DSWD volunteer said the P1,000 to P2,000 the family would most likely receive would be enough to buy ply wood to construct a small house.

Ornada said their family might go back and rebuild their house along the riverbanks. “Then, that becomes a problem,” Ornada said when informed that the government would no longer allow them to go back to areas declared as “danger zones.”

Today, however, the refugees at the PhilSports Arena had left, after they were forcibly driven out by the city. Many had encamped at the capitol grounds in Pasig but many till remained homeless.

Jon Vincent Marin, spokesman of the urban-poor group Kadamay, said the government should be more considerate to the victims of Ondoy. He said the victims deserve free housing facilities.

“We heard President Gloria Arroyo would be coming out with an executive order declaring that displaced families living along ‘danger zones’ would no longer be allowed to go back there,” Marin told Bulatlat in an interview. “With the evacuees in Ultra being sent home, where else would they go back to but to riverbanks and along waterways. They are confusing us with the contradicting statements that they are telling the public.”

Problems at the Evacuation Center

Marin said the Pasig local government seemed to have rushed the removal of the evacuees the PhilSports Arena could e reopened for events reservations. He also told Bulatlat that the local government of Pasig had allegedly received substantial donations from foreign and local donors. Thus, Marin surmised, the local government was pressured to show the donors that the victims had been properly assisted and relocated.

A number of evacuees talked with Bulatlat to relate their problems, as well as some alleged anomalies that they had observed, but requested that their names be withheld. They feared that once their names would appear in an article exposing the alleged anomalies inside the evacuation center, they would no longer receive even a single centavo from the local government.

They told Bulatlat that the coordinators of the evacuation center have received P25 million ($532,141) from a donor from India. They said they witnessed the picture taking as the Indian donor gave the envelope to the coordinators of the evacuation center. Nanay Maria, 60, said that on Oct. 10, roughly 1,000 packs of relief goods from SM, the mall chain, arrived at the PhilSports Arena but never reached them.