The progressive women’s organization spent part of its 25th anniversary launching a petition for nurturing assistance to families affected by calamities, jobs, livelihood and housing, and justice for the government’s apparent neglect and “systemic ineptness” in the face of disasters.

In a previous report of national urban poor organization Kadamay, they said many housing units provided in past government relocation sites easily crumbled under storms because it were poorly built. A recently relocated relative of a homeless family in Barangay Silangan told Bulatlat that there is still no electricity or water in the relocation site. Electricity and water services could be installed in the houses, but the incoming resident must first arrange for it with electricity and water providers, for a fee. It is also far from their current jobs. Without money or jobs after the disaster, they could not imagine how they would pay for installation of electricity and water, let alone putting food to the table.

It would help if the community of homeless are given a chance to freely discuss and study all options and give suggestions. But said Renato Morales, there is nothing like that happening in Barangay Silangan. “If you complain, you’ll just be told ‘why, we didn’t ask you to come live in disaster-prone areas.’“ Morales explained that his fellow homeless are just compelled by trauma to line up to get that relocation, even under this no-discussion, take-it-or-leave-it setup. “Who would want to place their children in the path of raging waters again?” 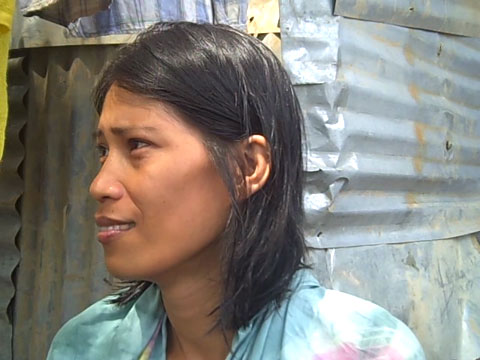 “What is important is we should be relocated to a place where we will be a bit more stable and where the basic needs are readily available – for instance, utilities and jobs,” said Mylene Candelario, 36, member of Gabriela and part-time househelp. She reasoned that if they were just plunked “like garbage” in the middle of nowhere in houses without electricity and water, in a community where they do not know if and where they can find jobs or livelihood, then it would not be sustainable. Many might just leave and return to areas vulnerable to disasters.

It is not as if the poor are asking the government to give them everything. They have fended for themselves for years. In so doing, they have built and given names to communities such as Greenland, Tanim ni Abraham, Tumana and Paltok extension. It was not their fault that these areas turned out to be disasters waiting to happen. The government should have told them that, they said, when they were paying for rights and paying for requirements to avail of the government’s community mortgage plan.

But now that they have paid for the government’s neglect with their lives and houses, they are the ones being blamed and then being hauled off to the unknown. A strategic solution is needed, Emmi de Jesus said. Even without disasters, genuine programs to generate sustainable jobs, livelihood, and affordable housing should have been a steady fixture in government planning and budgeting, she added.

Some of the disaster victims are now going back and rebuilding houses on the sites of their former homes. They say, “If we’re just going to die of hunger in the relocation area, we’d rather face the flood. We have survived the flood, we should know now how to survive another.”
(Bulatlat.com)