Colmenares said that even a cursory research revealed that a heavy tint or aluminum foil can render the RFIDs ineffective. As such, Colmenares concluded that the RFID cannot really help resolve the problem of colorum or carnapping. RFID is not the technology for detecting and ridding the roads of colorum, he said.

In a visit at the LTO on Thursday, Jan. 14., Ocampo and Colmenares talked to Vince Dizon, Stradcom’s vice president for corporate communications, on the technical specifications and procedures of the RFID system. “The guidelines for RFID were not yet finished and yet LTO already collected fees,” Colmenares said. “Is it true that RFIDs cannot be read if vehicles are close together?” he asked Dizon, who replied: “We will test it here.”

In fact, if the government truly wanted to eradicate colorum, they should eradicate corruption within the LTO, MMDA and local enforcers, who all have a hand in protecting colorum syndicates, said San Mateo. He said previous efforts to rid the roads of colorums, such as the PAKTAF (anti-colorum task force) and the “blackberry tech” (LTO identifying colorum), have both failed to do that. The RFID scheme offers no assurance that it can where the others floundered, San Mateo said. 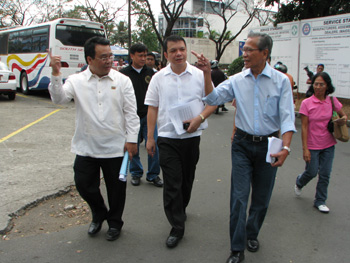 Bayan Muna Reps. Neri Colmenares and Satur Ocampo with LTO and Stradcom officials during a visit to the LTO on Jan. 14. (Photo byFred Dabu / bulatlat.com)

Leaders of some transport organizations such as Pasang Masda and 1-Utak who expressed support for RFID “didn’t realize that the RFID scheme is not anti-colorum but a money-making scheme that will ultimately penalize the drivers,” Colmenares said. Given the lack of rules and regulations in using the RFID, and more importantly its susceptibility to heat and water, drivers would only be flagged down and repeatedly fined or told to buy another RFID.

“To say that the RFIDs would help increase the drivers’ income despite the continuously rising oil prices is pure garbage and pure deception,” said San Mateo. Aside from Pasang Masda’s Roberto Martin and Vigor Mendoza’s 1-Utak, the other transport leaders who sang praises for the RFID scheme included Zeny Maranan, Boy Vargas, Efren de Luna and Lando Marquez.

“The unfortunate members of the transport organizations led by these opportunist, mercenary leaders should see them now for what they really are,” San Mateo said. He added that if they really wanted to increase the income of drivers and avoid seeking fare hikes, they should join the struggle against the Oil Deregulation Law.

Meanwhile, the struggle to refund the early LTO registrants begins. According to Colmenares, it would be very difficult for the LTO to explain why they violated the rules for bidding in connection with the RFID project with Stradcom. Also, Colmenares said it would be an uphill battle for the LTO to defend the doubtful technical usefulness of RFIDs. (Bulatlat.com)