MANILA — The court-imposed restrictions on the media covering the Ampatuan massacre trial are, for all practical purposes, a form of “special treatment” being accorded the main suspect, Andal Ampatuan Jr.

As such, according to journalists who held a protest on Wednesday, Jan. 13, outside Camp Crame, the venue of the hearing, the court and the Philippine National Police should remove these restrictions in the interest of the public’s right to know.

“We urge the court and the Philippine National Police to remove these restrictions and that live coverage be allowed,” Carlos Conde, spokesman of the November 23 Movement, said during the rally. The group is a loose coalition of media organizations calling for justice to the victims of the massacre on Nov. 23, 2009; it led, along with the Bagong Alyansang Makabayan, the protest action outside the police headquarters. He said these restrictions only benefit the suspect and are, thus, a form of special treatment. 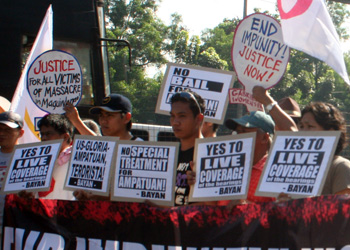 The court presided by Judge Jocelyn Solis-Reyes has disallowed live coverage of the Ampatuan trial. The Philippine National Police has also prohibited “ambush” interviews outside the court. Andal Jr. stands accused of masterminding what is now known as the worst single case of election-related violence in the country’s recent history, where 57 people, at least 30 of them journalists, were killed. 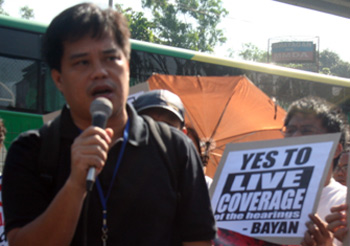 “While we respect the view that a trial by publicity can be detrimental to the accused, we fail to see how that can happen in this case. The Ampatuan case is extremely important for the public, the media and the relatives of the victims. The media and the public — particularly those who live outside Metro Manila and who can only follow the proceedings through the media — need to know exactly what is going on inside the courtroom,” Conde said in a statement.

“As journalists, we need to get accurate information for the public. The role of the media is important in ensuring that there would be no whitewash,” said Ilang-ilang Quijano, a director of the National Union of Journalists of the Philippines (NUJP), at the rally. 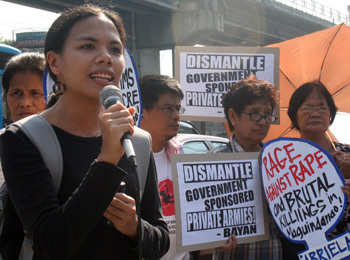 Conde said restrictions in the Ampatuan trial are, “at best, unreasonable and, at worst, a violation of press freedom and the public’s right to know.” “At a time when the Philippine press is under assault like never before, these restrictions are the last thing we need,” he added.

Conde said the ban on live coverage deprives the family of the victims, most of whom are based in Mindanao, an opportunity to follow the proceedings.

Vijae Alquisola, national president of the College Editors Guild of the Philippines (CEGP), criticized the “snail-paced” resolution of the case. 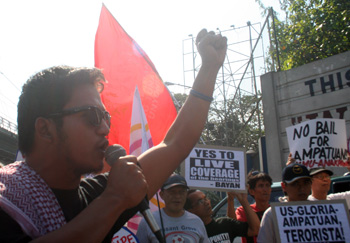 “It has been two months since the massacre happened and the children of the victims still cry for justice. They spent their Christmas and New Year without getting justice for their loved ones,” Alquisola said.

“We, campus journalists, join our colleagues in the mainstream media in calling for justice. Forgetting the Ampatuan massacre is allowing extrajudicial killings to continue. Forgetting is embracing the culture of impunity and the absence of justice,” Alquisola said during the protest.