Despite the deplorable conditions, the evacuees were unable to return to their homes because of the climate of fear that prevails to this day. Although heavily militarized, reports of the continued presence of the Ampatuan clan’s private army still persist.

AMPATUAN, Maguindanao — In the barrio now notorious as the site of the November 23 massacre that killed 58 people, hundreds of hungry families lingered in a tent city clustered around mango trees. In Barangay Salman, in this town, families seek shelter during humid days and chilly nights inside shacks of plastic sheets and woven coconut fronds of not more than five square meters in size,.

Evacuees relied solely on doleouts to survive and had to wait in line to use the few hastily erected toilets around the tent city. They received no medical attention even as children were getting sick from the lack of food and sanitation.

A sea of begging and shoving refugees mobbed the truck bearing a thousand bags of relief goods as it was still being parked. The police and organizers were helpless in making the evacuees form a line for an orderly distribution of goods. 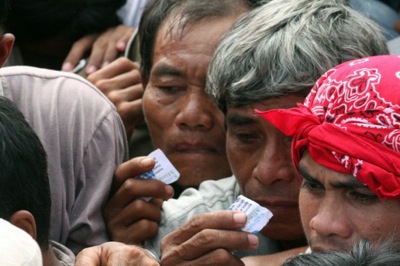 Despite the deplorable conditions, the evacuees were unable to return to their homes because of the climate of fear that prevails to this day. Although heavily militarized, reports of the continued presence of the Ampatuan clan’s private army still persist.

This was revealed by Kalinaw Mindanao, which held a National Interfaith Mission for Peace and Justice in Maguindanao last January 22 to 26. Kalinaw Mindanao is an alliance organization composed of human-rights groups, lawyers groups and Moro and church-based organizations.

“These evacuees are the hidden victims of human-rights violations caused by the warlordism of the Ampatuans and heavy military presence in the province,” Kalinaw Mindanao spokesperson Bai Ali Indayla said.

The evacuees and police and military officials confirmed to the mission the presence of unidentified armed men roaming in the area. Threats against civilians persisted in the form of house-burning, as was the case last January 12 when eight houses were torched in Sitio Agapok.

Maguindanao police director Senior Superintendent Alex Lineses also told the mission that several civilians who were arrested during the imposition of martial law on the province remained in custody. It is not clear whether formal charges have been brought against them.

The mission also reported in a press conference in Davao City last January 26 that majority of the evacuees were eyewitnesses to the massacre, but were too afraid to speak up. It also confirmed that, at the time of the massacre, there were about 400 elements of the Philippine National Police at the Ampatuan municipal hall, only about a kilometer from the entrance to the massacre site from the national highway. “The massacre could have been prevented had the authorities only performed their duty,” the official mission report said.

“The plight of these civilians, who are also victims of the Ampatuan massacre, should be addressed. They will not live a normal and peaceful life unless the Ampatuans are swiftly brought to justice, its private armies completely dismantled, and all police and military authorities made to answer for their complicity in the crime,” Lovella de Castro, Karapatan secretary-general, one of the convenors, said.

De Castro said that the Ampatuan massacre has brought the number of extrajudicial killings under the Arroyo government to 1,188. Not one perpetrator of any of these killings have been punished.

“We will continue to demand the accountability of the Arroyo administration for the Ampatuan massacre and other human-rights violations, even after the elections. We cannot move forward as a nation unless Arroyo and the Ampatuans are punished. Unless this happens, expect the climate of fear and culture of impunity in Maguindanao and elsewhere in the country to continue,” De Castro added.