MANILA — Various medical associations expressed outrage today over the arrest, detention and alleged torture of 43 health workers. In a press conference at the Alvior Hall of the University of the Philippines College of Medicine in Manila this morning, officials of these groups refuted the military’s claim that the 43 are communist rebels who were undergoing bomb training when they were arrested in a raid on Feb. 6.

Forty-three health workers were arrested that day at the farmhouse of Dr. Melecia Velmonte, an infectious disease specialist in Morong, Rizal, by around 300 combined elements of the police and military. The military claimed the health workers are members of the New People’s Army (NPA), the armed group of the Communist Party of the Philippines.

“We deplore the shabby treatment she [Dr. Velmonte], her family and staff were accorded by the military and police when they raided her farmhouse and training center in Morong, Rizal last February 6, 2010,” said Dr. Alberto B. Roxas, professor and dean of the UP College of Medicine.

Dr. Roxas said Dr. Velmonte’s farm house has been the usual venue for the annual global health course conducted by the college. Dr. Velmonte is professor emeritus of the UP College of Medicine. 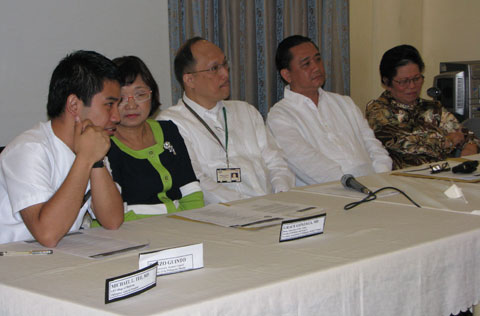 “If that is the behavior of the AFP [Armed Forces of the Philippines] and PNP [Philippine National Police], health professionals would no longer dare to go the countryside to serve the underserved,” Dr. Roxas said.

Dr. Roxas added that media accounts of how the detainees were forcibly taken and their detention at Camp Capinpin have portrayed “chilling images that bespeak the grim days of martial law.”

Relatives of Dr. Alex Montes, Dr. Merry Mia and other detained health workers attended the press briefing, as well as doctors, nurses and students of the college.

“The only weapon that a health worker carries with him in the so-called battlefield is the stethoscope for the doctor, the sphygmomanometer for the nurses and the cotton balls for the other community health workers, and their only common enemy is the disease that threatens the community,” said Dr. Bu C. Castro, spokesman of the Philippine Medical Association and president of the Alliance of All Health Organizations of the Nation.

The military insisted they found guns and bomb-making devices at the venue of the training.

Dr. Castro added that if the state deems that the health workers have indeed violated a law, then by all means they must defend themselves in court .

Dr. Grace Gonzaga, dean of the University of Santo Tomas College of Medicine and president of the Association of Philippine Medical Colleges, said that the incident would affect the delivery of services to the poor. “There is already a maldistribution of doctors and health professionals in the regions. How do we encourage our students to go to the rural areas if these incidents happen?”

Dr. Eleanor Jara, executive director of the Council for Health and Development (CHD), said the harassment of health workers is not new. “When a health worker goes to the countryside to do health mission, they are labeled as NPA,” Dr. Jara said.

Dr. Roxas said that “the UP College of Medicine has lost one too many of its alumni who have done nothing but live out its mission as a government institution – educating community health volunteers and especially physicians towards service to the underserved.”

Ramon Lorenzo Guinto, chair of the University Student Council of UP Manila and a medical student, said the recent tragedy struck fear among them as it revealed how “perilous the world is for those who, with the purest of intentions, reach out to the disenfranchised.”

Today, he said, “a doctor who traverses mountains in the provinces can easily be accused of being an NPA or a rebel and gatherings such as health trainings like the one held in Morong can be planted with guns and grenades and tagged as a bomb-making activity.”