You Are Here: Home → 2010 → February → 22 → Migrante: Women OFWs in Saudi Arabia Link Arms to Repatriate Stranded OFWs and their Children Immediately and for Free!

Migrante: Women OFWs in Saudi Arabia Link Arms to Repatriate Stranded OFWs and their Children Immediately and for Free!

Women OFWs in Jeddah, Saudi Arabia linked arms on Friday to protest what they claim as government’s abandonment of its responsibility to the plight of ‘stranded’ Filipinos by charging for air-tickets.

Acting on complaints by stranded women, Medina claimed OWWA would not shoulder the cost of air-ticket because the children are “not OWWA members” thus, are not included in the agency’s budget for repatriation of ‘stranded’ overseas Filipino workers. 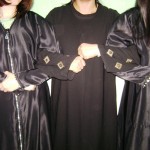 “This is absurd!” Medina exclaims. “These children of ‘stranded’ OFWs are already forced in a very vulnerable situation brought about by the “undocumented” status of their parents.
These are children of OFWs who have paid their OWWA fees and have contributed in keeping the Philippine economy in more ways than one. What’s keeping the government to shoulder their repatriation?”

In a letter sent to OWWA dated 22 February 2010, Medina along with other local Migrante leaders outlined their call to immediately repatriate all, and at no cost to the ‘stranded Pinoys’.

“Whether we like it or else, the Philippine government have already benefitted from the (‘stranded’ Pinoys) in various ways, primarily through the payment of numerous fees and requirements before they left the country and through the remittances that they have made during their stay here in Saudi Arabia,” the letter explains further.

Data gathered from various sources by the Migrante Jeddah show there are some 405 ‘stranded’ Pinoys who signified their intent to undergo the ‘legal-deportation’ process just so they can all go home. The group, housed at Al Mina Center by the Philippine Consulate under the auspices of OWWA Jeddah, includes some 30 children and 19 pregnant women.

This does not include a group of 11 ‘stranded’ Pinoys from Riyadh (six of whom are children) who were recently apprehended by local Immigration authorities. The group was left under Khandara Bridge by a ‘fixer’ who promised to repatriate them. A certain Nasser, who introduced himself as a Case Officer from the Philippine Consulate is reportedly charging SAR 1,300 each for air-ticket.

“Charging the ‘stranded’ Pinoys for airfare, including children, the overstaying Umrah, even those apprehended under the circumstances is a state exaction tantamount to government’s abandonment of its responsibility to repatriate those who are most vulnerable,” Medina asserts further.

“Sadly, this situation can only be traced to its mother, OWWA Omnibus Policies which utterly cut all types of services to OFWs,” Ociones explains. “The mindset is that anyone who has not renewed their membership or has abandoned their contract by being abscondees, regardless of the abusive circumstances, do not have any right to any of OWWA programs and services.”

“If OWWA would not provide the services to the OFWs, where else would its fund go?” Ociones asserts. “We sincerely hope not to somebody else’s pocket.” ###