News in Pictures: 100 Days of Injustice

MANILA — Marking the 100th day of the gruesome massacre in Ampatuan, Maguindanao, various groups led by the November 23 Movement gathered at the Boy Scouts’ Monument in Quezon City on Wednesday to denounce the Arroyo regime for what they call as a “contuining injustice” committed against the victims.

In a joint statement, the College Editors Guild of the Philippines (CEGP) and alternative media groups Bulatlat.com, Pinoy Weekly, Kodao Productions, Mayday Productions and Davao Today denounce the Arroyo regime for fostering a “culture of impunity” that undermines democracy and the rights of journalists and ordinary citizens. 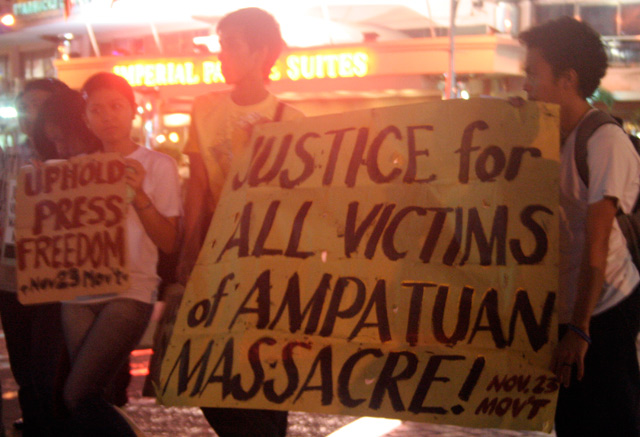 “What happened during the last 100 days? The exceedingly slow grind of justice as manifested in the following: the alleged special treatment of the prime suspects Andal U. Ampatuan Jr. and Andal S. Ampatuan Sr.; the fact that even as 197 suspects have been identified, only one is being prosecuted; the escape of a retired police officer allegedly involved in the crime; the delaying tactics and the petition for bail of the defense; the continuing harassment of witnesses and their families; the failure of the Arroyo government to dismantle private armies and paramilitary groups; the failure of the Arroyo government to investigate and prosecute military and police officers who allowed the massacre to happen under their watch and the promotion of Major General Alfredo Cayton and Colonel Medardo Geslani who refused to provide the journalists with their requested security escorts,” said the group.

The group also reiterated its demand to lift the restrictions on media coverage of the hearings, which violates press freedom and the people’s right to know. The said ban on media coverage not only violates press freedom but will also deprive the public of its right to monitor the hearings, which works against efforts to keep alive the memory of this heinous crime and the pursuit of justice.

Lawyer Julius Matibag of the National Union of People’s Lawyers (NUPL) paid tribute to Connie Brizuela and Cynthia Oquendo, the two lawyers slain in the massacre, as well as shared updates on the case. Vijae Alquisola, CEGP national president, said campus journalists are also vulnerable to repression and human-rights violations.

Meanwhile, the Center for Media Freedom and Responsibility (CMFR) and the Southeast Asian Press Alliance (SEAPA), in their joint statement, said that, aside from the weakness of the Philippine justice system, “the mass media’s own short attention span and susceptibility to the lure of reporting those events that help boost ratings and circulations to these problems and issues, and we have the potential for the massacre’s not only going unpunished, but even forgotten.” 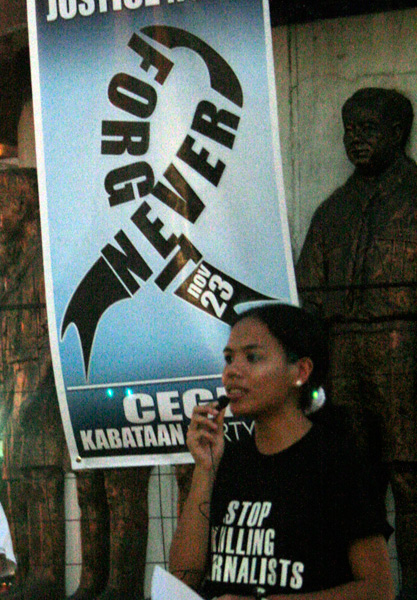 The National Union of Journalists of the Philippines (NUJP) called on colleagues in the media to wear black ribbons on their left sleeves and appealed to televison networks and radio stations to kick off the newscasts with a brief story on the commemoration and an update on the case.

Red Batario, executive director of the Center for Community Journalism and Development (CCJJD) and Ilang-Ilang Quijano of NUJP, in a symbolic action, released white doves to signify the continuing quest for justice for all victims of the massacre.