Take a Day Off, Join Protest on March 8: Gabriela

MANILA — Gabriela, the country’s foremost alliance of progressive women’s organizations, has declared March 8, International Women’s Day, as a “day off” for Filipinas, a day to be spent out in the streets, marching, protesting and asserting their rights.

Allied organizations composed of women from all ages and walks of life made sure the week leading to March 8 was a week full of protest. Indeed, during the first week of March, Gabriela members were in Mendiola near Malacañang for five days, its different member organizations protesting at the historic bridge to the presidential palace.

In the two days that week that they gave Malacañang a rest, they gathered together at the Welcome Rotonda and they joined their “comfort women” grandmothers in a rally in front of the Japanese embassy and then their migrant sisters in a camp-out at the offices of the Overseas Workers Welfare Administration (OWWA). 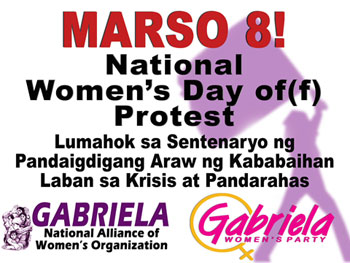 Bulatlat will cover the March 8 rally in Mendiola, with live webcast as well as Twitter and Facebook updates.

“The worsening economic and political crisis under the Arroyo government is burdening women and families more than ever and spurring more women to join collective actions to demand for their rights and welfare,” said Emmi de Jesus, Gabriela’s vice chairperson and a nominee of the Gabriela Women’s Party in this year’s elections.

But it is not just the economic woes “caused by the Arroyo government’s pro-globalization policies” that the progressive women said needed to be changed. Their week-long protest actions also raised demands for justice for women and children victims of the government’s repressive measures, including the Ampatuan Massacre, where 15 of the victims were women, and the case of 43 health workers arrested and detained by the military, 26 of whom are women.

Last month Gabriela and its sister organization, the Gabriela Women’s Party, led in establishing an alliance of women against impunity and tyranny of the Arroyo administration. Called “Women Resist Impunity and Tyranny or WRIT,” the new alliance gathered Tuesday morning last week at Mendiola to issue a symbolic “writ of eviction” to Arroyo, who has been occupying Malacanang since 2001, longer than any other president since the dictator Ferdinand Marcos, and whose regime has been accused of numerous cases of corruption and human-rights abuses.

WRIT convenors and members delivered a writ of eviction addressed to Arroyo and padlocked the gates of a replica of Malacañang Palace to symbolize their demand for Arroyo to step down from power and immediately “return possession of [her] usurped authority to the Filipino people.” Arroyo is supposed to step down in June but she is running for a congressional seat, leading critics to believe that she may hold on to power longer.

“Any woman who yearns for freedom and respects human rights cannot just stand back and allow Mrs. Arroyo to cling to power. At this point, the first step in addressing the disquieting situation of human rights in the country and delivering justice to numerous victims of human-rights violations is for the Filipino people to ensure that Arroyo would immediately vacate Malacañang. We must also frustrate any scheme she has to hold on further to power,” de Jesus said.

Fighting For What Women Want

Decent housing, gainful jobs, adequate food on the table, sufficient social services such as health care, education, housing, social security — these usually comprise the basic dreams of most Filipinos, men or women. But landlessness and joblessness often frustrate these dreams. In urban areas choking with landless or militarized refugees from the countryside, Gabriela’s members from the urban poor told of how Arroyo is actually the “No. 1 homewrecker.”

It used to be that informal settlers and even legitimate but low-earning homeowners in areas marked for demolition and “development projects” were easily lured to vacate their shanties by promises of relocation and housing projects. Not anymore, members of Gabriela said in a rally at Mendiola last week. The women’s groups detailed how the relocation sites for demolished urban poor communities have been “totally neglected by the government” to the point of these being unsafe.

Most of the women protesters with de Jesus came from various relocation sites in Manila and Quezon City. Residents of Katuparan Housing Project in Vitas, Tondo, said their tenement buildings are now considered as “extremely unsafe,” but the National Housing Authority (NHA) persists in ignoring their demand for rehabilitation.