Josie Lichauco: High-Society Girl Who Rubbed Elbows With the Masses

Josie Lichauco, who passed away recently, was that rare person who, despite or perhaps because of, her rich and privileged background, found the courage to speak the truth and tilt at the windmills of arrogant power. She came down from her perch in high society and marched with the abused and the dispossessed.

MANILA — She was a feisty and courageous woman who was not afraid to speak the truth, a vocal critic of her former student Gloria Macapagal-Arroyo. She was also a beautiful and brilliant student, a loving mother and a doting grandmother. She is Josefina Trinidad Lichauco, or Josie to her friends, and colleagues. A lawyer, she turned into an activist when she vigorously campaigned for the ouster of then president Joseph Estrada and current President Gloria Macapagal-Arroyo.

Colleagues and friends say Lichauco lived a meaningful life as she made it a point to be on the side of the truth and justice. As former vice-president Teofisto Guingona said in a tribute to her: “She is a woman who is dedicated to what she believed in and she’s not afraid to speak out the truth especially in times of crisis.”

True enough, Lichauco worked closely with the Bagong Alayansang Makabayan or Bayan. She was a key partner, together with Concerned Citizens Movement, in the Oust GMA Movement.

Her working relations with Bayan started when she became one of the key figures in the Estrada Resign Movement. But her involvement did not end when Estrada was deposed. She pursued her activism, protesting the election fraud during the 2004 presidential elections, the NBN-ZTE scandal and the widespread violations of human rights under the Arroyo government. 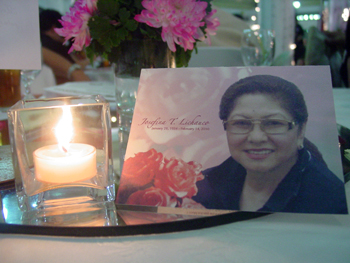 In the March 10, 2010, tribute for Lichauco initiated by the Concerned Citizens’ Movement, which she co-convened, Dr. Carol Pagaduan-Araullo, chairperson of Bayan, said: “Despite such a background” — referring to her decidedly privileged upbringing — “Josie was able to reach out and be in solidarity with the disadvantaged, exploited and oppressed among our people.”

Being a valiant critic of the Arroyo administration, Lichauco was visible in all protest actions against the government. She was among those who protested the massive election fraud during the 2004 presidential elections. The protesters, Lichauco among them, called Arroyo, former Commission on Elections (Comelec) chairman Benjamin Abalos and former Comelec Commissioner Virgilio Garcillano — who was widely suspected of orchestrating the cheating to favor Arroyo — as “election terrorists.”

“Not only did she fight against corruption and abuse of authority in and out of government, she also took up the cudgels for victims of human rights violations, especially activists and ordinary people who were critical of or opposed to the Arroyo government,” Araullo said. Lichauco, together with her friends in the Concerned Citizens’ Movement, organized a forum and a march and dialogue with the European Commission on the issue of human rights. She signed petitions, joined prayer-rallies and demonstrations, and even visited activists unjustly imprisoned and joined campaigns to secure their freedom.”

Lichauco also visited the Batasan 6, the six partylist lawmakers who were detained when Arroyo declared a “State of National Emergency” in 2006. She strongly condemned the gross violations of human rights and the spate of extrajudicial killings targeting political activists.

Ellen Tordesillas related that in 2001, when Arroyo was newly installed as president through a People Power uprising, Lichauco was offered the position of ambassador to the United Nations in Geneva. However, when she learned of the numerous controversies hounding the government, she immediately withdrew from the job. Tordesillas said Lichauco wrote a stinging letter to Arroyo, saying: “I’ve lost faith and respect in this presidency.”