MANILA — From the Radio Frequency Identification System (RFID) scheme, which was blocked last January due to its questionable usefulness and the dubious processes it underwent to become a “requirement” in motor registration, the Arroyo government now turns to imposing another ID system. Dubbed as the Unified Multipurpose ID (UMID), it is slated for implementation this month, drawing suspicions and protest actions from both public and private sector workers who stand to be immediately affected.

The UMID will initially be adopted by the Government Service Insurance System (GSIS), Social Security System (SSS), Philippine Health Insurance Corporation (Philhealth) and the Home Development Mutual Fund (Pag-IBIG). These government entities have a combined membership of approximately 49.5 million, or more than half of the Philippine population, according to the Confederation for Unity and Advancement of Government Employees (Courage). GSIS has 1.5 million members; SSS, 27 to 28 million; Philhealth, 10 million; and Pag-ibig, 10 million. Costing P180 ($3.95) each, the Unified Multipurpose ID will generate P8.91 billion ($196 million) in revenues for the government.

“We fear that this multimillion project will be another campaign kitty for the Arroyo administration and also an avenue to skirt the unconstitutionality of the National ID System which was already rejected by the Supreme Court during the Ramos regime. This could be the initial phase of the National ID system, considering that the membership of the four workers’ fund totals to almost 50 million,” said Ferdinand Gaite, Courage’s national president.

On Dec. 12, 1996, then president Fidel V. Ramos signed Administrative Order 308 titled “Adoption of a Computerized Identification Reference System” purportedly to facilitate the delivery of government services. Because of fears that it would be used to violate the right to privacy and to monitor people critical of the government, AO 308 resulted in a groundswell of protests. This forced the Ramos administration to go slow in its implementation. The last nail in the coffin was hammered by the Supreme Court when it declared Administrative Order 308 as unconsittutional.

In a statement, Courage voiced their doubts about the “promised results of the UMID.” They said that efficient and better services from the GSIS, SSS, Pag-ibig and Philhealth can be better felt by the fund owners through increased dividends and benefits rather than a mere ID replacement. “Although the government presents the project as simple and necessary, we deem that this will bring more problems than solutions. It is expensive, impractical and shall subject the people to surveillances and other forms of political harassment,” Courage said. 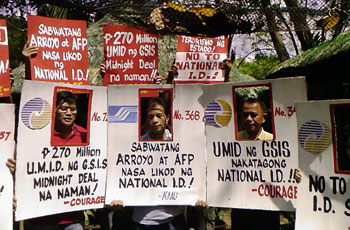 Critics hold a demonstration against the UMID, calling it useless and a waste of people’s money. (Photo by Marya Salamat / bulatlat.com)

To illustrate, Gaite said the UMID is just the third in the line of ultimately useless cards being pushed by the government to GSIS members since 2004, when it sold them the e-card; then in 2007 the so-called e-GSIS card, and this year, the UMID. “Despite these cards, employees are still complaining, up to now, of the very slow processing and services of GSIS,” Gaite said.

“The UMID will not really fast-track the delivery of services to members,” said Anakpawis Representative Joel Maglungsod. Instead, he said, it could even be used as an excuse to deny or delay the approval of loans or assistance. According to Rep. Maglungsod, the information embedded in UMID cards, similar to what the government wants to implement with the National ID system, would have to be checked and double checked with the DILG, for instance.

“UMID can help hit two birds with one stone,” Maglungsod said. Aside from being a money-making scheme to help defuse the Arroyo government’s burgeoning deficit problem, he said the UMID, just like the National ID system, would likely be used, too, in conjunction with the government’s counter-insurgency program.

“This new project is highly questionable since there are lots of GSIS-related problems such as the underpayment of premiums, delayed posting of premiums and loan amortization, and the most recent scrapping of the survivor pension for dependents, spouse and family of members,” said Gabriela Women’s Partylist Representative and aspiring senator Liza Maza.

“Before entering into another project, the GSIS should first solve the problems that have long been plaguing the agency and until now are burdening its members, as well as improve its services,” Maza said.

Showing his own SSS card, Joselito Ustarez, vice president of KMU (May First Movement), explained that the “present ID in SSS is sufficient for any transaction with the SSS.” He said that adding other required data field in a new ID “is another way of worsening the lack of benefits,” such as “what the SSS members suffered in the aftermath of Ondoy and Pepeng.” He stressed that the P4.8 billion ($105,413,418) projected cost of UMID to SSS’s 28 million members could be put to better use if made available to members as benefits instead, and not as a double-edged ID card.

Ustarez added that the billions of money to be “spent” on UMID may only be used by Arroyo for her own gain in the coming elections, especially since the SSS is under Romulo Neri. Neri is widely perceived as being loyal to the Arroyo government especially after he refused to reveal his conversations with the president regarding the bribery-ridden NBN-ZTE contract. (Bulatlat.com)