You Are Here: Home → 2010 → March → 27 → A Fulfilled Promise: Lumads Graduate from School Harassed by Military

A Fulfilled Promise: Lumads Graduate from School Harassed by Military

Wearing Manobo-designed vestments adorned with colorful bead necklaces and earrings, 24 graduating indigenous youth proudly marched during the third graduation ceremonies of Alternative Learning Center for Agricultural and Livelihood Development (ALCADEV). Tears of joy filled the morning of March 10, 2010 as students, parents, teachers and other guests celebrated the end of another school year full of achievements and challenges.

It has been a custom for traditional schools to cap the school year with graduation or recognition ceremonies to acknowledge the achievements of the year. But for the alternative school for Lumads in the hinterlands of Lianga, Surigao del Sur, the completion of a school year is in itself a reason to celebrate.

The celebration had already started a day before the actual graduation. Parents and guests from other provinces arrived early and spent the night in the school compound in preparation for the early morning activity. Community members helped the students and teachers in preparing for the ceremonies and setting up the venue. At sunset, a ritual was performed to forge unity and as a sign of gratitude. Guests were asked to wear the saya, a native skirt, and participate in the indigenous dance.

“There is a reason to celebrate today. It is part of our culture as Lumads that we incorporate the sacred rituals in thanksgiving celebrations. We are very thankful for the educational achievements this year and the completion of the construction of function hall building amidst hardships and disruptions,” Han-ayan community tribal chieftain Datu Tayadan who officiated the ritual said. 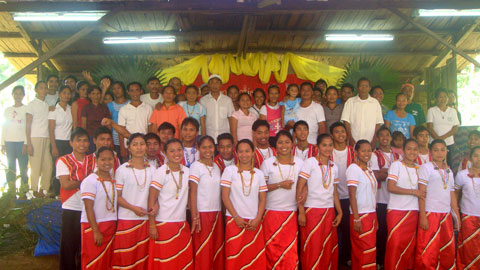 There is a reason to celebrate today. (Photos by Marife Magbanua / bulatlat.com)

When he mentioned about hardships and disruptions, Datu Tayadan was referring to the recurring military operations in Andap Valley Complex, which affect the school and the communities surrounding it. The Andap Valley Complex is being eyed for exploration and development by huge mining companies. Economic activities in the Andap Valley have been disrupted after a series of evacuations in 2005, 2007 and 2009.

“I asked the baylans (tribal priests) in this ritual to chant and beseech Magbabaya to drive bad spirits, which are attempting to ruin what we have started, away and to bless all the developments in this ancestral land so we can build a better society for the next generation. It has been our dream for our children to be educated so that we will no longer be deceived,” Datu Tayadan said in Manobo.

With the theme “Alternative education: a venue for collective sharing of sustainable agricultural skills and practices for environmental protection,” the third graduation rites was successfully held despite the disruption of classes from July to August 2009 because of the militarization in Han-ayan, which forced the communities and the school to evacuate for 40 days. The graduation event was attended by some members of the different indigenous communities from Agusan del Sur and Surigao del Sur, the datus, Manigaons, leaders and members of the Lumad organization. ALCADEV also invited religious groups, professionals, youth, and non-government organizations who are supporting the school’s cause and the Lumads‘ struggle in defense of their ancestral land. Mr. Johnny T. Pimentel, Surigao del Sur provincial administrator, Lianga town Mayor Roy Hegino Sarmen , Vice Mayor Robert Lala and Barangay Diatagon village council also joined the celebration.

“Despite the vilification (of the military) against this school and the communities, I am thankful to visitors who came and join this meaningful achievement of Lumads. It was a painstaking yet fulfilling task to push for the realization of this kind of education in the hinterlands. It was also impressive as ALCADEV is a highlight and landmark in the continuing history of Lumads. The Lumad communities in this province consider it a proud achievement. It symbolizes their aspiration for a better future for their children, their pride in their culture and their hope which is rooted in the struggle for their ancestral lands. ALCADEV is a fruition of years of cooperation with various groups and individuals both foreign and local,” ALCADEV Program Director Marife Magbanua said in her welcome speech.