Workers from Dole Philippines’ union Amado Kadena have been staging weekly coordinated picket protest actions at the Dole Philippines’ main office in Makati City, and at the site of Dole’s “biggest integrated pineapple plantation, cannery and packaging complex in the world,” in Cotabato City in southern Mindanao to demand that the company “stop interfering in union matters and to stop violating its collective bargaining agreement (CBA) with its workers.”

With net revenues of $6.8 billion in 2009, Dole is the world’s largest producer and distributor of high-quality fresh fruits and vegetables, and is the leading producer of organic bananas. Dole markets a growing line of packaged and frozen fruits and is a self-proclaimed industry leader in nutrition education and research. The food company has been doing business in the Philippines for more than 40 years now. Its plantations cover 20,000 hectares of land, mainly in Mindanao.

The protesting unionists in Luzon and Mindanao, led by the National Federation of Labor Unions (NAFLU) which is affiliated with KMU (May First Movement), also urged the management of Dole Philippines (DolePhil) to respect and observe the “status quo ante or the state of things prior to the happening of the controversy,” in compliance with the March 18 order of mediator-arbiter Angelo M. Raagas of Koronadal City’s Bureau of Labor Relations.

The latest controversy in Dole Philippines stems from the company’s alleged maneuvers to oust the duly elected officers of the 5,000-strong Amado Kadena-NAFLU-KMU, union of DolePhil’s hourly-paid employees. 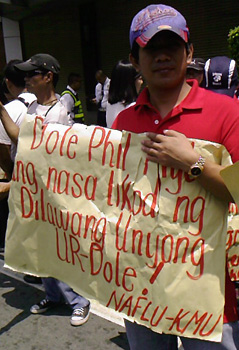 Robert P. Buranday, industrial relations manager of Dole Philippines, Inc., told the duly elected officers of the union in February 23 that Dole is now transacting with a new set of union officers after a “General Membership Assembly was held last February 13, 2010, participated in by more than 3,000 union members, representing 71 percent more or less, of the total membership, as evidenced by the attendance sheets.”

In the said assembly, Buranday claimed, “all positions in the union were declared vacant,” and the duly elected officers belonging to the Amado Kadena were “ousted and impeached.”

However, the unionists charged that the said special general assembly was illegal and obviously held in connivance with DolePhil management. Moreover, they charged that the processes the illegal assembly undertook to remove the Amado Kadena officers violated the union’s constitution and by-laws as well as provisions of the country’s labor code.

According to Tony Pascual, general secretary of NAFLU-KMU, DolePhil’s Buranday failed to mention that the DolePhil management has actively taken part in holding that general membership assembly and in forcing the workers to join or affix their signatures later to make it appear that they had attended it even when they did not.

The impeachment of duly elected officers did not follow the stipulated due process, said Pascual, adding that neither did the ‘election’ of the new set of officers. For one, Pascual said, the supposed elections were conducted through a mere show of hands, contrary to what the union’s charter stipulates. A committee to oversee the elections was also not formed. Furthermore, Pascual said the union finds it incredible that the supposed elections took only over an hour when more than 3,000 votes were credited to each candidate. They also noted that no representative from the labor department was present to witness and observe the ‘special general assembly.’ 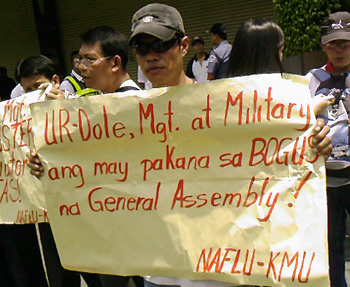 The said assembly was marked “by undue interference from the employer-company,” and, gauging from the minutes of the meeting, is “tainted with massive fraud and irregularity and was no different from a ‘moro-moro,’” said the Amado Kadena (AK) officers in their petition filed at the labor department regional office in Koronadal City last February 22.

The ‘illegal’ assembly was held at DolePhil’s very own Cannery Plaza in Polomolok, South Cotabato last February 13. Union members told AK officers that they were coerced to attend it. They reported that during their meal breaks, they were strictly monitored by their supervisors and superiors and were compelled to go to the Cannery Plaza to sign the attendance sheet.

This latest maneuver by the management was preceded by anti-union seminars held in Polomolok by the military in recent months, Pascual told Bulatlat. He said that the Amado Kadena-NAFLU-KMU union has been the subject of red-baiting, military harassment and surveillance for years now.

The assembly being used by DolePhil to justify the ouster of the duly elected union officers is illegal, stressed the officers of Amado Kadena. They said the DolePhil-approved union leaders led by Mr Francis Gales had misrepresented themselves as representatives of all AK-NAFLU-KMU members to call and lead the assembly. They added that the general assembly should not have been called at all, or at least, not yet, because the labor department’s order for the holding of such assembly is not yet final.