MANILA – With the numerous vulnerabilities and problems plaguing the May 2010 elections, 31 organizations comprised of religious groups, progressive organizations, people’s organizations, citizens’ election watchdogs, among others were not content with holding a picket in front of the Commission on Elections (Comelec), they even reprised the Jericho march last April 21 against “threats of a failure of elections and a military take-over.”

In the Biblical account, the Israelites marched seven times around the heavily-fortified walled city of Jericho in order to conquer Canaan. The seemingly unassailable walls then collapsed, and the Israelite army charged straight to the city.

The protesters then “demolished” a makeshift stonewall with blocks bearing “failure of elections” and “military take-over.”

“There are indications that the election will be manipulated by the powers that be to promote their own interests, that there will be heightened election violence and fraud,” said the organizations in the April 21 statement. The protest action was held to issue a “stern warning to the Comelec and the Arroyo administration not to push through with the sinister scheme to make the elections fail,” read the statement.

On the contrary, the protesters said there is an increasing likelihood of a failure of elections based on repeated ballot rejections and difficulties in transmitting results in several mock elections; the absence of National Printing Office markings in ballots for the Autonomous Region of Muslim Mindanao; the lack of time to accommodate the 1,000 voters expected to queue at every precinct and defects in the ultraviolet markings on the ballots, Dizon explained, citing the observations of election watchdog Kontra Daya. 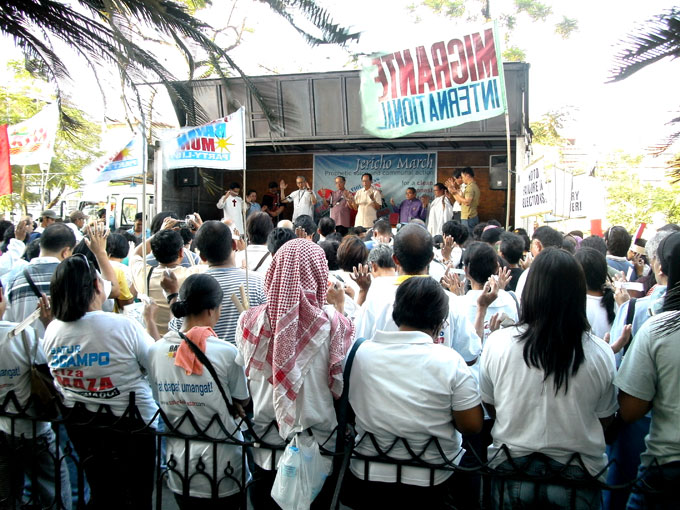 And yet, the Comelec “refuses to acknowledge the vulnerabilities of the Automated Elections System (AES)” and does not consider the fact that it is the last elections under Arroyo’s nine-year term and the first using the automated system, said Judy Taguiwalo, co-chairperson of Pagbabago! People’s Movement for Change, a network of groups pushing for social reform and stronger opposition against extension of Arroyo’s term.

Moreover, almost all the safeguards in ensuring clean elections were removed in the AES, such as the lack of a digital signature and a mechanism of the verification of the vote, said Ernie del Rosario, former director of the Comelec Informations Technology department. For instance, the voter will not be able to review his vote after he feeds the ballot to the Precinct Count Optical Scan machine, he explained.

To begin with, the public has much to worry about in the sudden shift from manual to automated elections when it is done gradually in other countries, said Del Rosario.

“It seems that the government is rushing the AES to deliberately make the elections fail and perpetuate Arroyo in power in a hold-over capacity, or in a transition government advocated by Defense Secretary Norberto Gonzales himself,” said CCM member Harry Roque during the protest action. 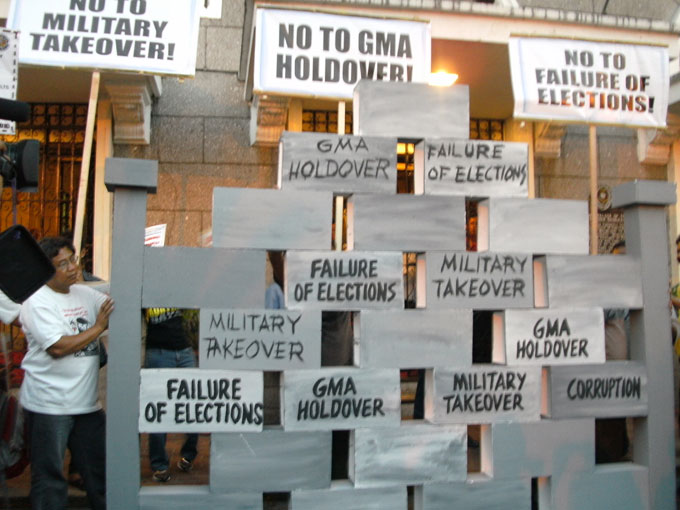 Also, a military junta may take over the administration in case of no elections, said Bagong Alyansang Makabayan Rep. Renato Reyes, Jr. This is a “dangerous scenario” because in such a take-over, a spate of extrajudicial killings, illegal detentions and other human rights violations will be further legalized, he added.

Given the track record of the current administration, the public should remain remain watchful of these “frighteningly possible” scenarios, said Kontra Daya in a statement.

The Malacanang, for one, has been protecting the masterminds of the November 23 Maguinadanao massacre, “the greatest election-related violence in history,” said Roque. Justice Secretary Alberto Agra issued the resolution dropping the charges against Zaldy and Akmad Ampatuan in order to conceal the vote-padding in favor of Arroyo during the 2004 elections, he added.

“All these signs reinforce our call for the people to be prepared to take any necessary action in the event of any worst-case scenario,” said Dizon. “This ‘Jericho march’ will be considered a dry-run for other protest actions that we would have to stage in case the elections fail.”
(Bulatlat.com)