Trying to Survive Each Day

Mary is also complaining about pains in her chest, which she thinks is a heart ailment, for quite some time already, but she could not go to the doctor for a check up because she has no money for that. Her son JM has asthma but she can’t bring him to the doctor either. “I just let it pass whenever he has an asthma attack” she said, shrugging her shoulders.

The health center in Sitio Veterans has no doctor and no medicines. “I never receive any help from the government. My children who could have availed of public school education but we could not afford the fees and other expenses,” Mary said.

Mary is not the type of person who goes out and mingles with others. Most of the time, she stays inside her house watching television and taking care of the kids. But through her neighbors, she became a member of Samahan ng Maralitang Kababaihang Nagkakaisa (Samakana). Samakana is a nationwide federation of women from urban poor communities. Through their organization, Mary is also participating in protest actions calling for social justice. She said she never had second thoughts about joining the group because, even before when she was still in the province, she knew how the government system works. When asked if her husband ever objects to her decision to join the organization, “No, he understands. He also wanted that because he knows that I only began going out of the house when I became a member of Samakana,” she said. 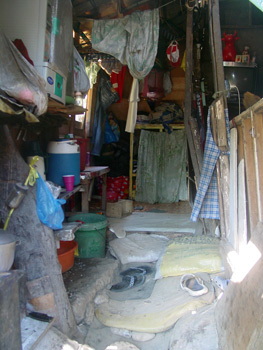 Mary said Samakana has helped her a lot. She found new friends to turn to especially in times of crisis. Lilia Daclan, a member and organizer of Samakana in Sitio Veterans said Mary is an active member of the organization. She actively participates not only in mass actions but also in education seminars. Daclan said almost all women in Sitio Veterans are members of the organization. She shared that the battered women that they were able to organize are now aware of their rights and are also actively organizing.

“We tell them that women should not confine themselves in the house serving only her husband. She should go out enjoy herself and do whatever she wants to do.”

Daclan also said that Ricardo, Mary’s husband, is also supportive of her involvement. “Ricardo is different, he also joins in our activities.” But for now, because of her health condition she slowed down in her involvement in the groups’ activities.

Mary passes time watching television that they got from the garbage. Her mattress and other things that they use in their makeshift house all came from rich people’s garbage, even their clothes.

The coffee that she served Bulatlat during the visit is loaned from the store; their viand for dinner was left over from lunch. “What’s important is that our stomachs are full at the end of the day, so I really make it a point that the rice I cook will last until dinner or until the next day so that we will have something for breakfast.” (Bulatlat.com)