The Haute Couture as Mirror of Burning Issues of the Time

Lia Torralba, president of Kasibulan women’s group said that they have had exhibits with Gabriela but the satirical fashion show is the first project where they would work with the group as an allied organization of women.

Torralba is a visual artist who collaborates with fashion designer Gerry Katigbak. Torralba said that as a woman, these issues are close to her heart. “Of course, we want our children and grand children to have a better future. So this fashion show is a great venue where we can express the sentiments of the people.”

Ramona Dela Cruz-Gaston is also a visual artist and member of Kasibulan. She said that she is also pleased to be a part of the said project. Gaston collaborates with fashion designer Joel Francisco on five designs. “I hope that our designs convey a message to those who would see the fashion show,” said Gaston. 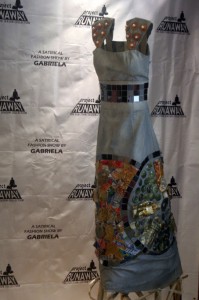 The gown on poverty(Photo by Anne Marxze D. Umil / bulatlat.com)

Even designers who are not politically involved agreed to be part of the satirical fashion because of their dismay and disappointment in the Arroyo government.

Rei Raña, a designer for almost ten years, said that this is a worthwhile experience. Raña said this is not the first time that he participated in such an activity, “I also participated in this kind of project with the Kabataan Partylist in 2004,” Raña said.

Raña is not a member of any political group but he also has criticisms against the government such as the recent decision of the Department of Justice to dismiss the murder charges against Zaldy and Akmar Ampatuan.

Raña said he is not a registered voter, “I never voted ever since…so I believe that the least that I can do for the country is by sending out a message through the clothes and at the same time I can do the thing I love the most,” he said. He said that participating in this activity is also a dream come true. Angel Aquino, her favorite model, will wear one of his creations for the April 30 fashion show.

Raña designed three creations for the Spring collection and one for Fall collection.

Joel Francisco is also a designer for 20 years. He said this is the first time that he participated in this kind of project. He said he was asked to participate in the fashion show by his friend, Lia Torralba. Like Raña, Francisco is also not a part of any organization. But he is also dissatisfied with the government that is why he easily got interested when invited by Torralba. “It is inspiring and at the same time challenging for designers like us to get involved in this kind of project. Somehow as a designer, I can express my views against the government,” said Francisco.

Francisco worked abroad for five years and returned to the Philippines in 2009. His clientele includes GMA 7 and other stars.

Progressive leaders like Representatives Liza Maza and Satur Ocampo will also model for the April 30 satirical fashion show together with other celebrities like Angel Aquino, Rochelle Barrameda and Keanna Reeves. (Bulatlat.com)