After the Herrera Law Weakened Workers’ Rights, Another Labor Code Revision in the Offing?

The Herrera Law also made it more difficult for workers to strike. Aside from a deadlock in the negotiations for a Collective Bargaining Agreement (CBA), the Herrera Law allows strikes only when there are “gross and rampant violations of the CBA’s provisions.” The constrictions on the workers’ right to strike was furthered by Department Order 40A issued by the Department of Labor and Employment. Under the said order, unfair labor practices could no longer be a basis for a strike unless these were “flagrant” and “malicious.”

Acts constituting unfair labor practices such as the arbitrary termination of union officers, but were not deemed as “flagrant” and “malicious” would have to pass through grievance procedures, voluntary arbitration, the Court of Appeals, and finally the Supreme Court. However, the National Labor Relations Commission (NLRC) admits that it has a huge backlog of cases for arbitration. Some arbiters are even suspected of accepting bribes to favor the case of management. So in effect, concluded Saladero, the legal redress for workers’ complaints is just as inutile.

Despite the chilling effect of violence against strikers and workers, the Philippine Labor department’s Bureau of Labor Relations (BLR) is often swamped with petitions and appeals for recognition of new unions. Every now and then, newly-unionized workers would hold protest rallies in front of the BLR office to urge it to listen to their plea for recognition. The companies where the newly-unionized workers come from vary –recently, employees of a big broadcasting company, assemblers of computer and electronics, makers of footwear, bottled tea drink, bread, among others trooped to the BLR.

So, if it is not for lack of trying, why is it that over the years, the number of unions and union members continued to fall? Aside from the lengthy, complicated requisites in registering unions, many new unions during the past twenty years have been denied recognition because of job contracting. Companies deny that they employ the newly-unionized workers, claiming that another entity, the job contracting agency, is the employer.

“Although the Labor Code did not detail what constitutes legal and illegal labor contracting, it authorizes the Labor secretary to issue orders such as Department Order 18-02,” said Saladero. He explained that the said order purportedly bans labor only contracting, but it provides guidelines on how capitalists could legally resort to labor contracting.

Saladero said the six prohibitions to contracting out labor, as listed in the DO18-02, are only a ruse. In real life, he said, firms have been doing these things. Besides, Saladero added, aside from the tangled and protracted process of winning a legal case against contractors doing labor only contracting, the penalty for such acts is too negligible: delisting the contractor’s registration and exacting from them a small penalty.

Given less and smaller unions, and as more workers are being forced to enter contractual and non-regular employment, the workers’ power to bargain for wage increases and humane work conditions correspondingly weakens.

Contractual and non-regular workers are often paid the minimum wage or a percentage of it. Yet, the past twenty years under the RA6727 (Wage Rationalization Act) showed how wage boards have been used to “keep wage increases at the slightest and company profits at its highest,” said Elmer Labog, president of KMU (May First Movement). 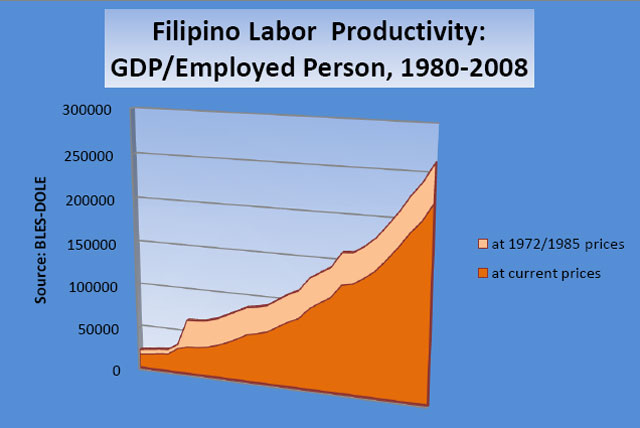 Filipino labor productivity, measured in terms of GDP per employed person, continuously rose from 1980 to 2008. 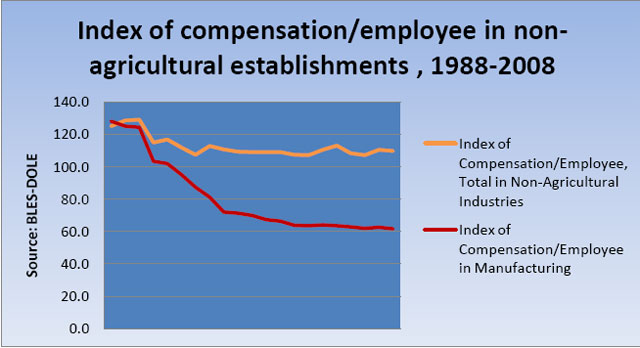 Despite the recorded rise in productivity of employed Filipinos, their earnings stagnated from 1988 to 2008.

In all Philippine regions today, prescribed minimum wages are less than half of the cost of living. In the National Capital Region, for example, the P382 ($8.55) daily wage is way too little compared to the P920 ($20.609) cost of living in the region.

Not only are the wage increases granted by the wage boards too measly for wages to catch up with price increases, its enforcement is also weak. The RA6727 itself said that the non-implementation of regional wage orders is not ground for a strike. Without the strike card, and with the amount of wages varying across regions, provinces and municipalities, how can workers press the government for a living minimum wage?

In 2003 DOLE also exempted firms registered as BMBE (barangay micro-business enterprises) from paying the minimum wages. Though in real life, workers in small firms and its owners have their own informal way of wage setting. Big firms hiding behind a subcontractor can register as a BMBE to evade paying the minimum wages. The KMU- affiliated National Federation of Labor Unions (NAFLU) discovered a company registered as a BMBE in Rizal province employing nearly 200 employees.

Its 20-year track record shows that the Herrera Law has weakened the Philippine strike movement and unionism while the Wage Rationalization Act has effected a deregulation of minimum wages. The two laws that revised the Labor Code have in effect reversed the hard-fought gains of the Philippine labor movement.

It bodes ill that employers are again pushing for more revisions in the Labor Code, especially in provisions that “limit or restrict the avenues by which business can exercise management prerogative.”

Gauging from government statistics itself on today’s state of unionism, collective bargaining and real wages, Filipino workers still have to catch their breath from the last major ‘dusting off’ of the Labor Code. (Bulatlat.com)