You Are Here: Home → 2010 → May → 6 → Gabriela Highlights Project RunAway: The Election Season Collection

MANILA — The Gabriela’s satirical fashion show dubbed as the Project RunAway: The Election Season Collection pushed through in the midst of unexpected rains. The catwalk was set outdoors at the Mowelfund Plaza. It rained hard though, but as they say, the show must go on.

The 30-piece creation of renowned fashion designers and visual artists who collaborated to create haute couture gowns and dresses that depict the burning issues of the times, was perfectly worn by well-known actresses, artists, mass leaders and political activists.

On that night of April 30, Gabriela literally “walked the talk” on the catwalk. “We are launching this activity because we are sick and tired of the mudslinging that has noticeably intensified in the last few days leading to election day. Tonight’s ramp will serve as the platform literally and figuratively for the people’s issues,” Lana Linaban, secretary general of Gabriela read in a statement. She said that this is their way of asking the presidential candidates to go back to issues and to bring their campaign to a high level, especially since April 30 was declared “Philippine Woman Suffrage Day.” Presidential Proclamation 2346 that declares each year as Philippine Woman Suffrage Day, enabling women to “renew their advocacy and support free, honest elections, and pursue with greater zeal their efforts towards that direction.”

The Project RunAway is a satirical commentary divided into two parts, The Fall and the Spring collection.

The Fall collection alludes to the imminent end of the Gloria Macapagal-Arroyo presidency, featuring six sets of clothes reflecting the bases of people’s discontent over the 10-year administration of Mrs. Arroyo. “The Fall collection is like the Fall of the Roman Empire,” Bibeth Orteza said during the satirical fashion show’s press conference. 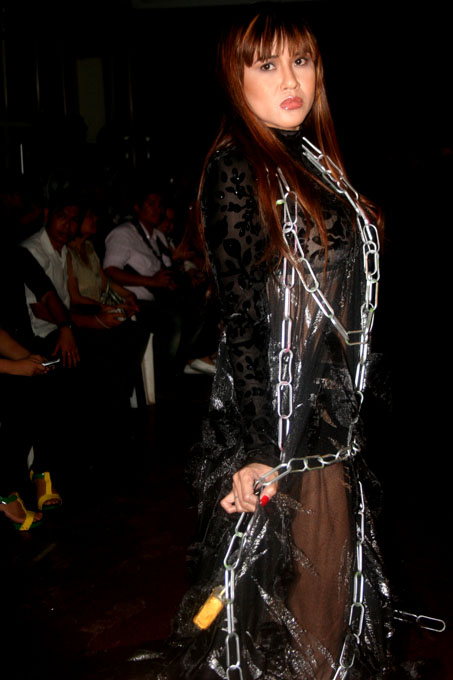 There are six thematic issues that were presented for the Fall collection, which are corruption, fraud and political patronage, political repression, US puppetry, poverty, violence against women and election scenarios.

There are two designs for corruption worn by whistle-blower Engr. Jun Lozada and Grace Saguinsin of the National Union of People’s Lawyers and Makabayan. The clothes were designed by Ugat Lahi Artist Collective and Boy Dominguez respectively.

Saguinsin who first hit the catwalk was wearing a pink Filipiniana dress. Called as Arroyo and cronies soaring high with the country’s coffers, the model portrayed Arroyo complete with a mole on her face. Her dress was hand-painted with the people’s money on the bodice, embellished with rag dolls asArroyo’s cronies atop the poor Filipinos robbed blind. The word “stealing” was stamped with approval via the seal of Malacanang.

Lozada wore a Barong Tagalog hand-painted with corruption scandals of the Arroyo administration such as the Macapagal Highway overpricing, Joc-joc Bolante’s fertilizer fund scam and the ZTE-NBN deal.

The theme for political patronage was worn by a known stage actor Malou De Guzman. Called as the Deadly Alliance, the creation was designed by Boy Domiguez. It was a green bottle dress embellished with rag dolls symbolizing victims of the Ampatuan Massacre and accessorized by bullet caches and a back hoe headdress made possible by Mrs. Arroyo’s culture of impunity. The way De Guzman has portrayed the theme as a strong and powerful ally of the Arroyo administration was applauded by the audience as she carried the dress with character. 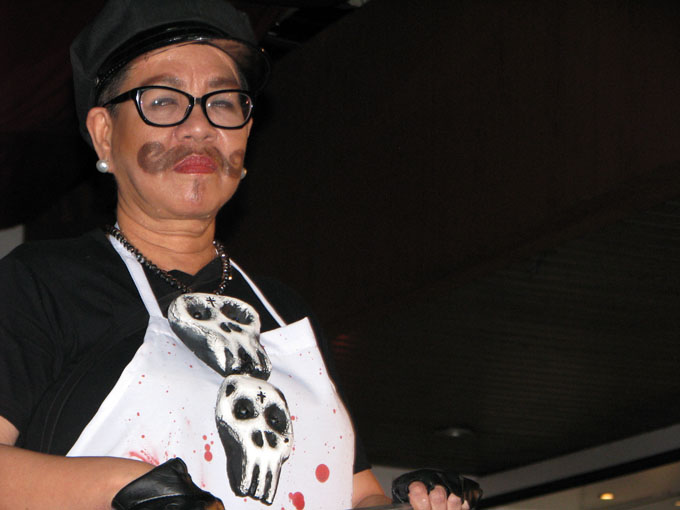 For the political repression theme, actor and scriptwriter Bibeth Orteza walked the ramp as The Butcher. The Butcher refers to retired Maj. Gen. Jovito Palparan who is being dubbed as Arroyo’s poster boy for human rights violations. Orteza swaggered in an apron stained with the blood of countless victims of human rights violations and brandished his butcher’s knife. The butcher is wearing an all black shirt, pants and boots and accessorized with a skull necklace and a beret.

Known urban poor leader and activist Carmen “Nanay Mameng” Duenida was perfectly dressed in a grey gown called as Walang Pera sa Basura for the poverty theme. The gown was embellished with plastic bottles, bottle caps, wrappers of canned sardines and instant noodles mirroring the burgeoning poverty of millions of Filipino people under Mrs. Arroyo’s administration. Being one of the urban poor herself, Nanay Mameng who was an activist for many decades received a deafening and overwhelming round of applause from the audience.