MANILA — Violence and technical glitches were reported during the first five hours of the elections.

A team of the Philippine International Observers’ Mission, hosted by the organization Pagbabago!, witnessed a gunfight between the police and the armed bodyguards of a candidate in Tugaya, Lanao del Sur. Rocket-propelled grenades (RPG), M60, and other assault rifles were fired and at least two were injured. The armed men hid inside a house beside the polling place while a chopper was circling it. The start of Muslim prayers caused a lull in the fighting. Earlier, Raymund Villanueva, Bulatlat reporter and member of the International Observers Mission in Lanao, was verbally abused and threatened.

Gunshots were also heard near and around Buldon, Maguindanao, startling voters. Soldiers scampered to check the source of the gunfire. A brawl also took place just outside the precinct in Buldon. Soldiers had to fire their guns to separate the two men, who, in the course of a fight toppled a PCOS machine. 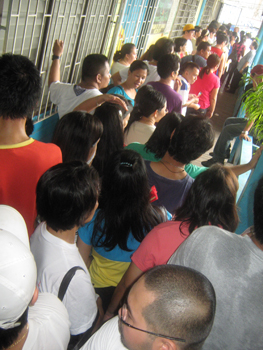 The long line of voters in a precinct in SFDM, Quezon City. (Photo by Giki Oliveros / bulatlat.com)

In Sultan Dumalungdong, Lanao del Sur, a failure of elections was declared due to the lack of Board of Election Inspectors, thereby affecting 7,180 voters.

Meanwhile, workers in Hacienda Luisita told PIOM that they are being prevented from campaigning for Anakpawis, Satur Ocampo and Liza Maza by the military. Leaders have been subjected to nightly surveillance and direct confrontation. They have reported to the PIOM cases of threats and intimidation by the military and Citizen Armed Force Geographical Unit.

Defective PCOS machines were reported in the following areas: 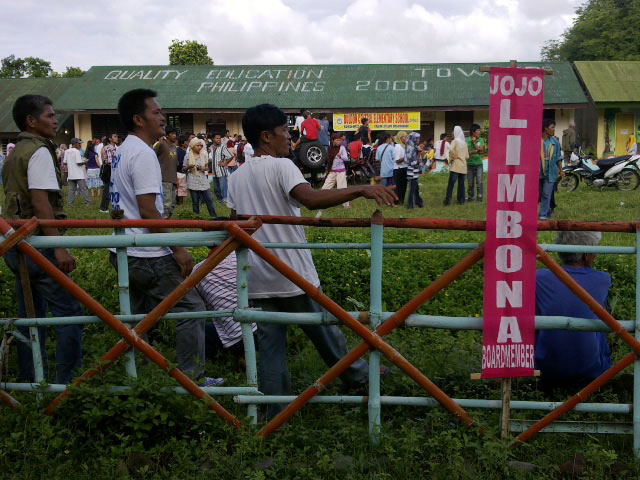 Voters in Buldon, in Maguindanao, react to a gunfire — one of four such bursts — while voting was going on at the Buldon Central Elementary School. It turned out that a soldier fired into the air to tear apart two men who were fighting inside one of the precincts. The other gunfires, however, came in other areas not far from the school. (Photo by Carlos H. Conde / bulatlat.com)

The cause of some malfunctions were the batteries that lasted for only three hours such as in Brgy Dalaon, Lumaban Nague in Marawi city, and in Lumbayanague, Lanao del Sur,. These were supposed to last for 72 hours.

Board of Election Inspectors in Marilog, Davao City also had to continue the voting even with a defective PCOS. In a report, the BEIs have decided to collect and compile the ballots manually and wait till the PCOS machine becomes operational or when the replacement arrives.

Some compact flash cards were also reportedly defective such as in Precinct #7 in West Abra Elementary School. The BEIs would have to wait for the compact flash to be delivered before they would resume elections.

In Dumaguete, intermittent brownouts caused by a trip in power supply were experienced. Also in Dumaguete, Smartmatic reported attempts to destroy PCOS machines through paper jam by placing foreign paper.

In precinct 2 in Bangued Abra, as of 8:25 am, four ballots were already rejected by the PCOS machine because of unnecessary marks.

In precinct number 7 also in Bangued, Abra, the BEIs had to do manually collect the ballots because of defective cf cards. The BEI said, that these will be inserted in the PCOS machine once the defective cf cards arrived.

Some problems that occurred during manual elections were still encountered today. These include the long lines of voters and names missing from the master list. 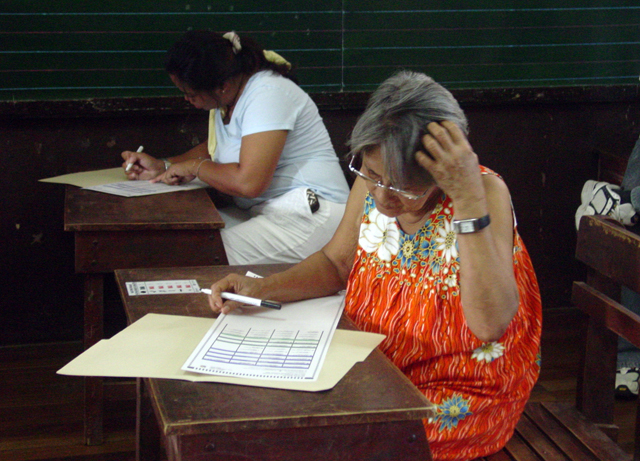 In Bangued, Abra, people are complaining of the very slow process — from checking the names of the voters to submitting the ballot to the PCOS machine. (Photo by Anne Marxze D. Umil / bulatlat.com)

Residents of BF Homes in Quezon City also fears that they would not be able to vote by 6 p.m. There are around 1,092 registered voters in that area.

Some, such as in West Abra Elementary School, have already returned home even if they have not yet voted due to the long lines and extreme heat.

Antonio Flores of Kilusang Magbubukid ng Pilipinas sent a text message to Bulatlat complaining that they are having difficulties finding their names and the precincts.

These problems have caused delays in the voting. The People’s International Observers’ Mission have been skeptical that voting will be done by 6:00 p.m. because of the delays. (With reports from Cielo Eunice Flores and Anne Marxze D. Umil / Bulatlat.com)