BANGUED, Abra — The violent politics in Abra have been landing in the headlines of major media networks since last year. Thus, the government and the general public were anxiously anticipating violence to erupt again on election day. To every one’s surprise, the May 10 elections began and ended without the usual violence. However, beneath the facade of calm, tension and fear still prevails.

Foreign delegates to the Peoples’ International Observers’ Mission (PIOM) who went to Malibcong, Abra held a press conference in Bangued May 11 to report not only about their observations regarding the conduct of elections, but also about the tension and fear that even they experienced.

Sr. Maureen Catabian, RGS, a local delegate of the PIOM, narrated that even as the local residents were assuring them that it is generally safe in the area, one could feel the tension and fear in the air. “I have seen fully-armed soldiers roving within the vicinity of polling precincts. Even if they were not inside the precincts, they were causing fear among the people. When they started taking pictures of us, I also felt threatened, ” Sr. Catabian said. She added that they have documented cases of harassments committed by the military. 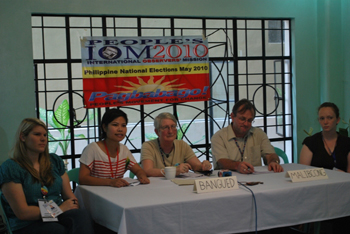 David Crotty, a delegate from Australia, also shared that he felt intimidated when he saw a soldier taking pictures of him. To stop the soldier, Crotty said, he introduced himself to the commanding officer and explained that he is an observer from the PIOM while showing his ID. The commanding officer said he knew them because he was present when the PIOM delegates paid a courtesy call at the military camp in Bangued. However, this did not stop the soldiers from taking pictures of him and the rest of the team. The soldiers, Crotty said, were even calling his name out loud.

“For me, taking pictures of a person without permission is an intimidating thing to do, because one would ask, what are they going to do with the pictures?” Crotty added. 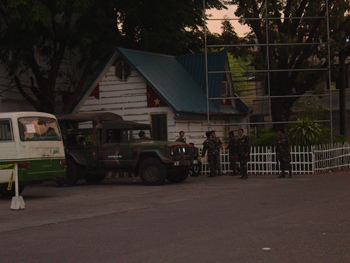 Crotty also said that he feared for the safety of the volunteers who facilitated the PIOM’s visit. “The threat, harassments, and intimidation we felt makes me more concerned about the local people,” he said.

Pamela Smith a delegate from the US said that even if the government says that this year’s election in Abra is generally peaceful compared to before, the military deployment is much heavier now than during the 2004 and 2007 elections. “ Smith was also part of a team of elections observers in 2004 and 2007. (Bulatlat.com)