You Are Here: Home → 2010 → June → 11 → Cases of Abuse of Household Helpers Increasing, Gabriela to Push for Laws for their Protection

Cases of Abuse of Household Helpers Increasing, Gabriela to Push for Laws for their Protection

Mary Jane Sollano was only 13 when she was recruited from Zamboanga del Sur in June 2004 to work in Manila. For five years, she suffered like hell as a house helper.

There were times when she was told to undress and her employers took pictures of her. She was hit with an iron bar and thick slippers. Her employers would sometimes pour hot water on her hands when she was caught getting food from the refrigerator. She was then chained and was not allowed to eat for three days.

She was prohibited from using any phone, to talk to her co-employees or to laugh, to sit, to peep through the window, to watch television, to eat and to rest until her work is done. She was not even allowed to read or write letters. She was also deprived of her salary and was threatened to be killed by her employers if she tried to fight back.

Her boss belongs to one of the influential families in the Philippines. Mariano Tanenglian, a former bank director and treasurer of Allied Bank, who is reportedly the brother of business tycoon Lucio Tan was her employer. Aleta, Mariano’s wife and their children Fayette and Marvin were also cruel to her, according to Sollano.

Sollano tried to leave but her employers did not permit her. She was threatened that “great harm would happen to her” if she would attempt to flee. 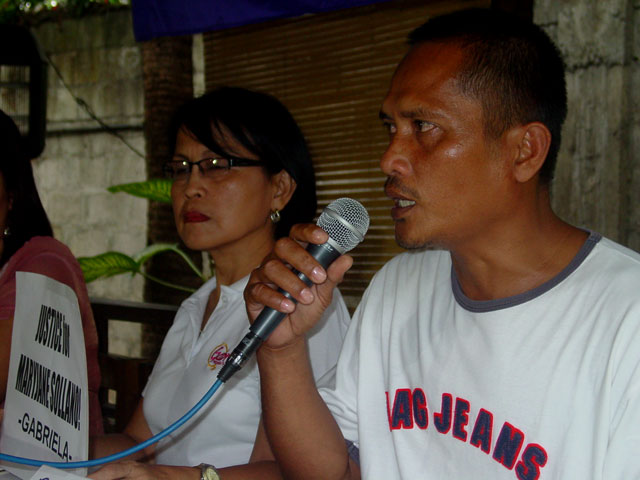 Sollano’s father Rolando said his daughter left their province without his consent because he was sick during that time. After his recovery, he looked for her daughter and only then did he realize that she was gone.

Aljane Bacanto from Southern Leyte suffered the same fate. She was only 16 when she was recruited in 2005. Another house helper, Gina Renecia, was then 15 when she was employed by the Tangelians. For 18 years, Renecia suffered at the hands of the Tangelians. They were kicked, hit with wood and iron chains, their heads slammed on walls and were slapped several times whenever they committed a minor mistake. 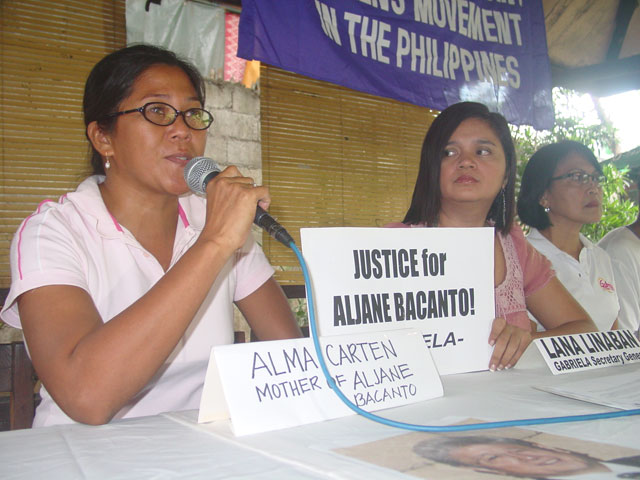 Bacanto’s mother Alma Carten wrote to Rolando informing him that her daughter, who was working in the same household as Mary Jane, was likewise being maltreated by their employers. On August 10, 2009, the house helpers were rescued from the Tanenglians.

The Regional Trial Court National Capital Judicial Region Branch 102 issued warrants of arrest against the Tanenglians but until now, the warrants have not been served.

On May 4, Quezon City Branch 102 presiding Judge Ma. Lourdes G. Giron issued warrants of arrest after the court found probable cause for violation of RA 7610 in the case filed by Sollano. A hold departure order was also issued against the Tanenglians.

The families of Sollano and Bacanto also sought the help of Gabriela. The women’s group said the court’s decision to issue arrest warrants against an immensely wealthy and influential family such as the Tanenglians was a milestone in the fight for the rights of domestic helpers in the country.

“When the victims’ families approached Gabriela, we didn’t have to think twice about supporting them. We know from our experience with fighting violence against women that victims need all the support they can get especially when the perpetrators are as influential as the Tanenglians. In many instances, cases are dismissed or dropped when the victims are continuously threatened and harassed,” said Lana Linaban, Gabriela’s secretary general, in a press conference June 5.

A Bill to Protect Kasambahay

Since 2007, Gabriela has recorded 15 cases of abuse of household helpers. These cases include different forms of maltreatment, including deprivation of salary and rape.

“Cases like these show that there is an urgent need to push for a law that would protect and uplift the conditions of household helpers in our country,” said Rep. Emmi de Jesus of Gabriela Women’s Party.

De Jesus said the Gabriela Women’s Party would propose a bill that would protect the rights of those employed in private households especially since this sector is the third biggest employer of women. De Jesus also said there has been a 30 percent increase in the number of house helpers, majority of whom are women, during recent years. These women are forced to work as helpers because of poverty and massive unemployment in the country.

She said that despite the inclusion of provisions protecting household helpers in the Labor Code, cases of maltreatment are still happening. Often, De Jesus said, rich and powerful employers such as the Tanenglians are involved.

“The enactment of positive measures and laws to protect household helpers is a challenge to the members of the 15th Congress and the new administration,” added De Jesus.

“We hope that justice would be served and the Tanenglians who maltreated our children be arrested and put to jail,” Carten said tearfully. (Bulatlat.com)