Sadly, this is the news that greeted Filipino human rights defenders who just arrived in the country from attending the 14th Session of the United Nations Human Rights Council (UNHRC), which was held from May 31 to June 18 in Geneva, Switzerland. Six Filipino human rights advocates, including Karapatan chair Marie Hilao-Enriquez, took part in the delegation as the Ecumenical Voice for Peace and Human Rights in the Philippines.

“It is alarming and deplorable that in the so-called peaceful transition from Arroyo to Aquino administration, the killings of activists and human rights defenders continue to be committed with brazen impunity,” said Marie Hilao-Enriquez upon their return.

“We were gone in the country for just 16 days and within that period, six people were summarily killed,” Enriquez lamented, saying the Filipino people have no respite from the killings and rights violations.

On June 1, farmers Julito Etang and Borromeo Cabilis were abducted by armed men believed to be members of the military in Mobo, Masbate. The two were found dead two days later, their hands tied, their mouths swathed in packaging tape.

On June 2, labor leader Edward Panganiban was shot dead on his way to work aboard his motorcycle, by men in bonnets and helmets who had been tailing him. Panganiban was secretary of Takata Philippines Corporation’s workers union in Laguna. 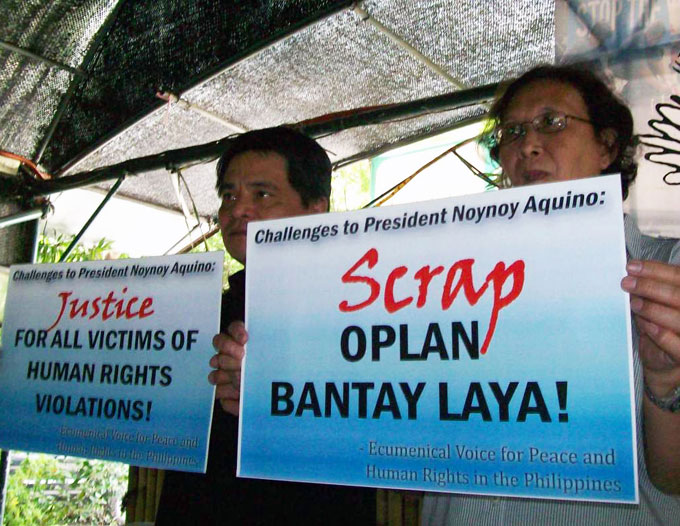 Delegates of the Ecumenical Voice present the results of their participation to the 14th session of the United Nations Human Rights Council in a press conference June 18. (Photo by Ronalyn V. Olea / bulatlat.com)

On June 14, in Negros Occidental, human rights worker Benjamin Bayles was waiting for a ride in Sitio Antolo, Bgy. Suay, Himamaylan when he was shot at by two men wearing helmets on board a black motorcycle. The men stopped near Bayles, one walked towards the victim and shot him several times. The driver also approached Bayles and shot at him too. Bystanders took Bayles to the hospital but he was pronounced dead-on-arrival.

The local police at first reported that they were able to arrest the gunmen who were identified as Roger M. Bahon and Ronnie L. Caurino who confessed to being “organic” members of the 61st Infantry Battalion of the Philippine Army. But the police retracted their statement the following day and said the suspects are not connected with the military.

Bayles was a constant companion during fact-finding missions of Karapatan-Negros secretary general Fred Caña, who is also under surveillance.

On the same day, in Manay, Davao Oriental, radio journalist Desiderio Camangyan was was shot and killed while hosting a singing contest. The next day, another radio broadcaster, Joselito Agustin, was killed in Bacarra, Ilocos Norte while riding his motorcycle on his way home.

“We urged the Council to help us in challenging Noynoy Aquino to fulfill his promise that he would make Gloria Macapagal Arroyo accountable and give justice to all victims of human rights violations,” Reyes said.

Reyes delivered an oral intervention about the effects of Oplan Bantay Laya (OBL) as an anti-insurgency policy of the Arroyo government.

Karapatan said Arroyo must be held accountable for the human rights violations in her nine years as commander-in-chief of the Armed Forces of the Philippines. “She, under the doctrine of command responsibility, as well as the perpetrators of these violations, must be prosecuted and punished; only through this can impunity be ended and justice be initially rendered to victims,” Enriquez said.

Arroyo’s counterinsurgency program Oplan Bantay Laya is the most brutal and bloodiest program ever unleashed by a Philippine president, Enriquez told the community of nations. “The distinction between armed combatants and civilian dissenters had been removed,” Enriquez added.

The Karapatan leader called on Aquino not to implement any similar counterinsurgency campaign and instead address the root causes of the insurgency.

Professor Philip Alston, Special Rapporteur on extrajudicial, summary or arbitrary executions, said at a side event on June 2 that “The President-elect will likely be reminded that he is heavily dependent on the Armed Forces of the Philippines, not to cause problems and that any prosecution will alienate the military.”

“The Morong 43 and Ampatuan massacre cases are a litmus test for Noynoy,” said Roneo Clamor, husband of one of the 43 detainees, Dr. Merry Mia-Clamor, and member of the Ecumenical Voice.

Clamor delivered a two-minute oral intervention at the UN HRC’s 14th session. He spoke of the violations committed against the 43 health workers.

Arrested on February 6 in Morong, Rizal, the 43 health workers now known as “Morong 43” were charged with illegal possession of firearms and explosives and branded as members of the New People’s Army (NPA)

All constitutional rights of the Morong 43 were violated, said Clamor. “They were detained at a military camp which is also a violation. They suffered physical and psychological torture. In the Anti-Torture Law, blindfolds and handcuffing are physical forms of torture,” Clamor said.

But Hendrick Garcia, Philippine vice consul to the United Nations in Geneva, defended the human rights violations of the 43 by saying there was a search warrant for illegal possession of firearms and that the police and military had supporting documents.

“Those arrested were in possession of firearms…As members of the NPA, several were found to have been involved in ambush on police personnel, several had outstanding warrant of arrest for murder,” Garcia told the UN HRC.