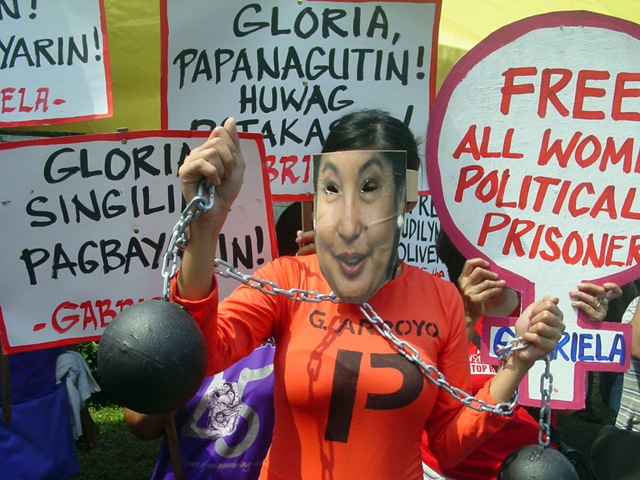 MANILA — Members of Gabriela trooped to the residence of president-elect Benigno “Noynoy” Aquino III on Wednesday to demand freedom of women and all political prisoners.

According to Gabriela, 61 of the 344 political prisoners under the Arroyo regime are women.

“These women political prisoners suffers from the hands of their captors and many of them were sexually abused. They are also in a most detrimental condition where they are continually made vulnerable to all forms of harassment, be these sexual, physical or emotional,” said Joms Salvador, deputy secretary general of Gabriela.

Like the rest of the political prisoners, women detainees were charged with fabricated common crimes, the group said. 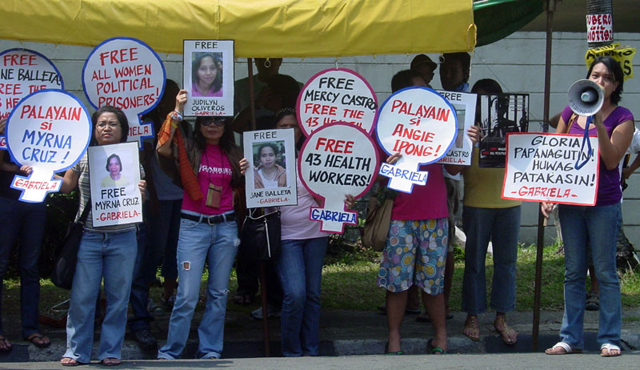 “What kind of government is this where a teacher is being thrown like a pig by her captors? My mother is only helping the peasants and the farmers; all she wants is equality in this country. We demand to the incoming Aquino government that my mother be released from jail as well as all political prisoners,” said Gem Abraham, daughter of political prisoner Myrna Abraham.

Myrna was abducted in a bus terminal in Pamplona, Cagayan on March 22 by four men in civilian clothes. She was handcuffed, blindfolded and thrown like a pig inside the van. Abraham is now detained at the Bureau of Jail Management and Penology in Tuguegarao City.

Myrna is a former teacher at Jose Rizal University and Colegio del Buen Consejo. She is also a long-time development consultant of Danggayan Dagiti Mannalon ti Cagayan Valley (Danggayan), a regional peasant organization and a member of Anakpawis chapter in Cagayan Valley.

Gabriela also cited the case of Angelina Bisuña Ipong who was abducted on March 8, 2005 by more than ten armed men in Misamis Oriental. Ipong was kept in isolation, was repeatedly tortured and sexually abused by her captors. She was now jailed at the Pagadian Provincial Jail in Pagadian City.

Ipong was a former lay missionary in Tagum and Davao City and a peace advocate and served as a trainer of catechists for schools and basic ecclesiastical communities.

“For opposing and actively criticizing Arroyo’s anti-people policies and politics, these dissenters were trumped up with charges fit for common criminals. Political prisoners are Arroyo’s victims,” Salvador said. 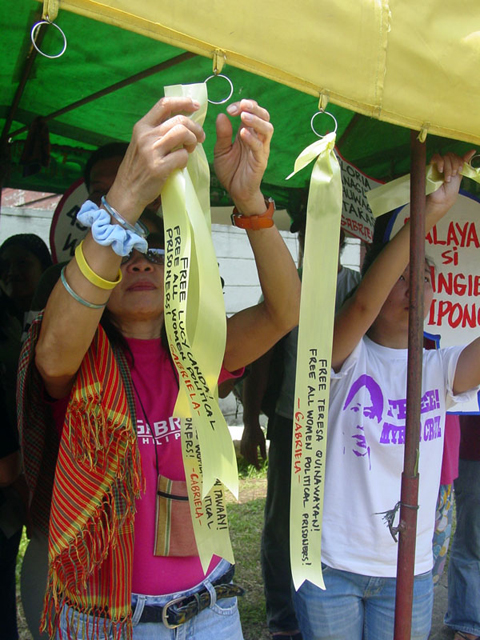 The group said Aquino must fulfill his promise of prosecuting Arroyo for human rights violations. “We take him to task on that promise, and like the rest of the country we expect no less from him,” Salvador said.

“Martial law robbed the people of their democratic rights and granting freedom to political prisoners was the late president’s gesture of restoring them. Arroyo’s regime is no different with its bloody record of victimizing the people, so it is only imperative that Aquino do the restoration as well,” Salvador said. (Bulatlat.com)