MANILA—“Every peasant leader’s situation in Hacienda Luisita today is very critical,” said Federico Laza, member of AMBALA (Alliance of Hacienda Luisita Farmworkers). All peasant leaders are openly under surveillance and being followed everywhere in the hacienda by at least four military men armed with high-powered rifles. “The people in Luisita are being threatened to discontinue their struggle for land,” Laza told Bulatlat in Filipino. If they did not, he said quoting the military, “something will happen.”

The group AMBALA has joined farmers and farm workers from other parts of Luzon in camping out at the foot of Mendiola Bridge near Malacañang since June 30, President Aquino’s first day in office at Malacañang. The peasants are advancing some “immediate demands” such as genuine land reform and pull-out of state armed troops from farming communities.

In the case of Hacienda Luisita, farmers are asking the Supreme Court to lift the already four-year-old temporary restraining order it imposed on the Agriculture Department’s 2005 decision to revoke the 1989 stock distribution option (SDO) and thus finally place the Luisita lands under physical land reform coverage.

With his son Jesus killed in the Hacienda Luisita massacre in 2004, 69-year old Federico Laza has become more active in the campaign for actual land reform in the hacienda. It has resulted in his being under military surveillance too, as well as being subjected to harassment although he is not a leader of AMBALA.

President Aquino may be publicly eschewing the use of ‘wang-wang’ which pleases a lot of motorists in Metro Manila, but in his family’s Hacienda Luisita in Tarlac peasant communities such as where Federico Laza hailed from have to live with something far worse than ‘wang-wang.’ Every night, fully armed military men no fewer than 10 per group would patrol the streets of barangays in Hacienda Luisita, meeting other marching soldiers, also no fewer than 10, at some points. 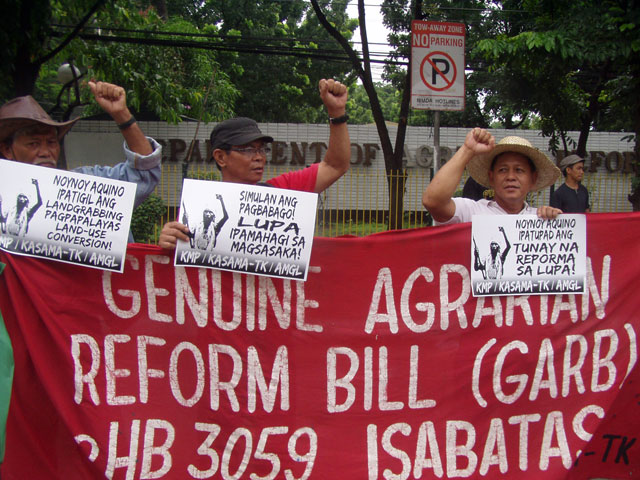 Only recently, Laza said these soldiers burned down the hut of one of the AMBALA leaders. Another Luisita local said the soldiers had also trailed the eldest daughter of a former AMBALA leader to her new job at a mall, threatening to abduct her in exchange for her father’s head on a platter. The girl resigned from her new job to avoid going out and being tailed by the military.

“The Hacienda Luisita has been turned into a military garrison,” Laza lamented during Aquino’s inauguration. 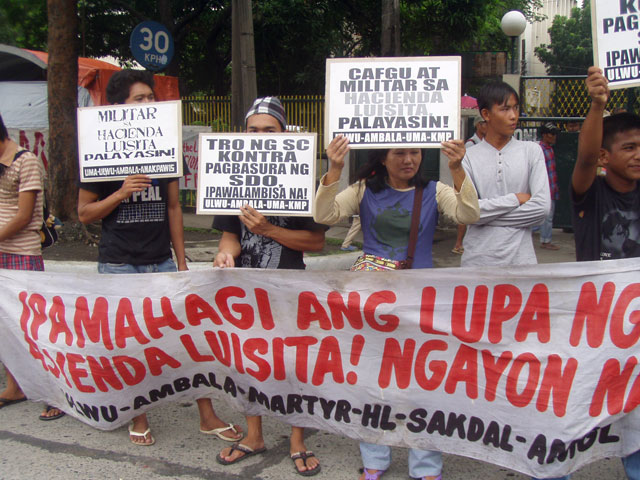 The pre-inauguration’s deployment of three military detachments in Bgy Balite near the heart of Hacienda Luisita and the detachments of CAFGUs led by military in surrounding barangays are being bolstered today by more troop deployment as well as by continuous recruiting of CAFGUs, the locals told Bulatlat.

Aside from CAFGUs, they noted that there is also an active recruitment at the Hacienda Luisita for BIN (Barangay Intelligence Network), which under Arroyo’s infamous OBL (Oplan Bantay Laya) has specific tasks in pinpointing for the state armed troops the “enemies” and their movements. The OBL happens to treat as “enemies” even the unarmed, progressive activists calling for land reform. On top of the BIN the locals said the Cojuangcos are also recruiting for their “yellow army.”

Under such intense militarization, the farm workers of Hacienda Luisita had to leave the hacienda for the peasants’ camp-out at Mendiola in various guises.

By day all seems “quiet” at the hacienda, the farm workers said, with the locals trying to go about their daily routine even if the military is sowing fear. Asked about their “routine,” Francisco Dizon, 40, told Bulatlat that after the 2004 massacre, “some men became women” in the Hacienda Luisita. He didn’t mean it as a slur; he is just describing the role reversals in their households so they could survive.

As families strive to keep their menfolk alive and avoid military questioning after the massacre, Dizon said the women went out to seek jobs while the men, laid off by Hacienda Luisita Inc. (HLI), were forced to hole up in their homes. Some women became domestic helpers in nearby cities. The men minded the home and the children, and later, the fields, too, after they gathered enough farm inputs and with their “farm collectives” braved to work the lands again.

To this day their chief sources of livelihood remain the hacienda lands, which they have now been planting with rice and vegetables, and which they hope to be finally, formally and physically theirs through a genuine land reform program.

But even before the lands that remained classified as agricultural in Hacienda Luisita are physically and formally distributed to its actual tillers, it appears that processes to re-concentrate it in the hands of the Cojuangcos are already underway. The key, as with the cases of most Filipino farmers who became “beneficiaries” of Comprehensive Agrarian Reform Program (CARP), is the farmers’ continuing poverty as there is little to none of support services for their farming. 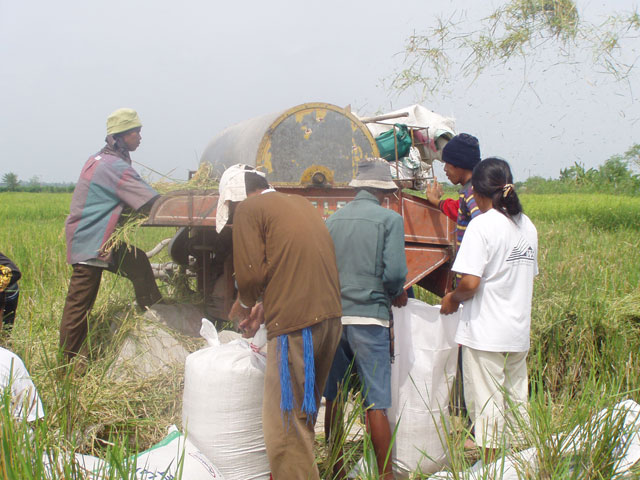 Of the 4,000 plus hectares of agricultural lands that remained from the originally 6,453 Luisita, farmers say that aside from the almost 1,500 hectares converted into non-agricultural uses, the Cojuangcos still have another 1,800 hectares of lands being planted with or earmarked for sugarcane— and they are increasing it every day by deploying their people to enter into contract farming agreements with bankrupt farm workers.

Though the farm workers’ “collectives” have planted some 2,000 hectares of Luisita with rice, vegetable and other crops, lack of funds hold them back from further improving their farming, or even from continuing to farm independently. Capitalizing on the extreme poverty of farmworkers, the Cojuangcos have been using its “usual people and networks to convince farm workers to enter into arrangements with them concerning the use of Hacienda Luisita lands,” said the farm workers. Whether under its LEM (Luisita Estate Management) or through its informal network, they are dangling “contracts” to “rent out” the farm workers’ plots for sugarcane planting for at least three years per contract.

Along with the contract and the money that comes with it, the Cojuangcos are also sowing intrigues and vilifying the progressive party lists and organizations. Amid the farm workers’ penury, “their people would go around the hacienda blaming progressive organizations, Satur Ocampo and the progressive party-list groups – telling our families we would not be this poor if we had not allied with these progressive groups, or accepted their help for fighting for land reform,” said the Luisita farmworkers camping out at Mendiola.

“We understand that it is just financial pressures that led some of our members to agree to the contracts,” Dizon told Bulatlat. He explained that to desperate farmers lacking immediate resources to continue planting other crops while sending children to school or feeding their family, the offer is a “kapit sa patalim” solution (literally, grasp at the knife or to a double-edged lifeline). But they remain hopeful that a genuine land reform program would solve all that.

Support services are “essential components of a genuine agrarian reform program,” as outlined by the KMP for President Aquino. It also does not stop at mere land redistribution, which the KMP said should be done “for free,” since the tillers, as exemplified by the Luisita farm workers, have more than paid for those agricultural lands in the past. (Bulatlat.com)