However, the response of the previous Arroyo administration to the needs of OFWs has been described by Migrante International, the biggest organization of OFWs and their families, as “criminal neglect” so there is nothing much to intensify. Furthermore, according to Migrante, in order for the government to be more responsive to their needs, it is necessary to repeal the policies and laws that are disadvantageous to OFWs, which were passed and implemented by the previous administration.

“We challenge Noynoy to, during his first 100 days in office, take action in litigating Arroyo for corruption for misusing OFW funds, criminal neglect of OFWs in distress and continuous deployment to high-risk countries,” Migrante International chairperson Garry Martinez said, adding that he will be no better than Arroyo if he does not do anything to reverse the former administration’s treatment of OFWs as mere milking cows.

Cases of neglect marked Arroyo’s presidency, leaving 41 Filipinos in death row, some 23 who have died under mysterious circumstances and thousands waiting to be repatriated. Thus, Migrante came up with a list of specific and concrete demands that must be addressed immediately if the Aquino government is sincere in responding to the needs of OFWs.

Martinez said it is high time to prove that the country is on the right track to genuine change by holding Arroyo accountable for misuse of public funds. “Those funds could have saved hundreds of thousands of OFWs in distress,” he said. 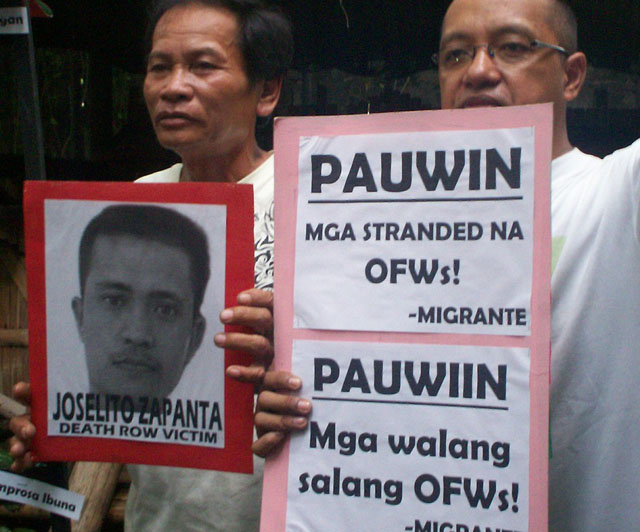 This include the $293,500 for the Middle East Preparedness Team headed by General Roy Cimatu during the United States war of aggression in Iraq, where no OFW was repatriated. As of this writing, the fund has never been audited.

The welfare fund of the Overseas Workers Welfare Administration also remains unaudited despite reports of corruption cases. A case in point is the alleged re-channeling of the P530 million ($11,400,301 at an exchange rate of P46.49) Medicare fund of OWWA to Arroyo’s presidential bid in 2004. The OWWA welfare fund is taken from the mandatory $25 membership fee every OFW leaving for work abroad has to pay.

Migrante said the policies and laws that were passed under Arroyo, which must be repealed included the OWWA Omnibus Policy, and the POEA Guidelines on the Deployment of Household Service Workers under Arroyo’s “Supermaid” training scheme. United Filipinos in Hong Kong chairperson Dolores Balladares said despite waiving placement fees for Filipinos applying as domestic helpers, recruitment agencies still profits a lot from the expensive trainings that they have to take.

Exorbitant and excessive state exactions should also be repealed such as the mandatory contribution to the Pag-ibig Fund and the welfare fund of OWWA.

Needed Services for OFWs and their Families

In recognition of the substantial contributions of OFWs in keeping the economy afloat, despite the economic crisis, Migrante said, there is a need to ensure that direct services are received not only by OFWs but their families as well.

To be able to do this, there is a need to review the annual OWWA budget because 70 percent is allocated to administrative expenses and only 11 percent goes to services for OFWs. The 10-Point Migrants Challenge also asks Aquino to work on the annual P1M ($21,510) increase in the budget for services for OFWs as mandated by the Magna Carta for Overseas Filipinos and Migrant Workers Act of 1995.

Aside from these, the newly-installed administration should scrap the Department of Foreign Affairs (DFA) policy that only Filipinos who are sentenced to death will receive legal services from them. The OFW group urged Aquino to immediately provide legal assistance to Filipinos in death row such as Dondon Lanuza, Eduardo Arcilla, Joselito Zapanta, Jakatia Pawa among others.