The abduction and imprisonment of Myrna Cruz-Abraham, an activist in Cagayan Valley, shattered her family but also made her children stronger. It is prisoners of conscience like her that present a challenge to President Aquino to be true to his promise of justice and respect for human rights.

MANILA – Today, July 9, is one of the most important days of the life of Myrna Cruz-Abraham. A court in Tuguegarao City is scheduled to hear her case today and if the judge decided that the charges of murder and violation of the election gun ban has merit, Myrna promised to go on a hunger strike.

“I call on all political prisoners, human-rights defenders, advocates and acquaintances, family and friends to join in and support my struggle for justice and freedom,” Myrna said this week.

Myrna, a development consultant of a regional peasant organization and a member of Anakpawis chapter in Cagayan Valley, was abducted March 22 and was later found at the Bureau of Jails Management and Penology (BJMP) in Tuguegarao City.

She was slapped with charges of murder and violation of the gun ban during election period and is now one of the hundreds of political prisoners in the Philippines.

Myrna should have been released July 2, said her daughter Gem. The court under Judge Marivic Beltran found that there was no probable cause in the cases filed against Myrna after her lawyer filed a motion for reinvestigation.

Beltran, however, did not grant the release paper and said that there still should be a hearing for the case to be dismissed. The judge scheduled the hearing on July 16 but Myrna’s lawyer, Romeo Calubaqui, urged the court to have the hearing on July 5. Calubaqui insisted that since there is no probable cause, Myrna must be released on the same day. The judge demurred.

“At first, the judge said that they are still furnishing copies of the motion for reinvestigation to the complainants. But the complainants didn’t care about the case at all. In fact, one of the witnesses has gone to Singapore,” Myrna said. She suspects that the elements of the 17th Infantry Division are the ones behind all these delaying tactics. 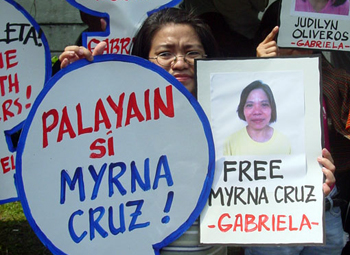 “I strongly condemn and protest this inhumane judicial process that I have been undergoing. In spite of the fiscal’s report and recommendation that the murder case they’ve involved me into be dismissed and I have to be given release order on the court’s behalf, no such thing happened,” Myrna said in a statement sent to Bulatlat.

A Teacher and Development Worker

Myrna went beyond the traditional way of teaching and became part of the conceptualization and establishment of the Women’s Center in October 1983. She worked with Maria Villariba of Center for Women’s Resources and the Rev. Ruth Cortez of Institute for Religion and Culture in the training and education work among women workers of Metro Manila.

From 1982 to 1985, she became an organizer of women workers and became part of the Women Industrial Workers Alliance (Wiwa) and Kilusang Manggagawang Kababaihan (KMK). From 1985 to 1989, she was a full-time organizer in local trade union areas of the municipalities of Pasig, Mandaluyong and Marikina.

She continued to work as an organizer and became a union organizer of public and private school teachers in Metro Manila from 1989 to 1990. She also organized livelihood programs for displaced workers in Metro Manila and later on, she became part of different cause-oriented groups. She also became part of St. Joseph’s Social Services and Crisis Management Committee-National Capital Region, became a convener of Women’s Caucus and a freelance consultant of various non-government organizations on planning and networking.

Myrna also worked as a junior trainer of Management Advancement Systems Association Incorporated (Masai) from 1991 to 1994. At Masai, they conducted trainings on basic management course for nongovernment organizations.

She was also a contributor to different publications like Kawing, a parish publication in Pasig and Conference of Asian Women Newsletters.

Gem told Bulatlat that her mother belongs to a poor family who lived in Pasig City, Myrna’s father was a jeepney driver and her mother was a battered housewife. This poverty and her membership at the Kabataang Makabayan (KM) in the ‘70s made Myrna decide to work for the peasants.

A Mother and Friend

A loving mother who always gives advice, who loves to cook for her children and a person who always laughs. This was how Gem descrbibed her mother to Bulatlat.

“She was a busy mother but she always makes sure that she has time with us when she was still working here in Manila,” Gem said.

Gem said that the relationship between them and her mother was more than the usual mother-and-child relationship. “We tell her everything, even our secrets,” Gem said.

Gem admitted that it was somehow difficult not to have their mother and father by their side all the time, especially when they were all going through adolescence. Her father is also a peasant organizer in the region. “Mama seeks help through Children’s Rehabilitation Center to help us understand Mama’s work and why she has to go there,” Gem said.