MACO, COMPOSTELA VALLEY – Communist guerillas who captured and released three soldiers and a militiaman in Compostela Valley in June scoffed at the entry of more government troops from Luzon.

Anvil Guinto, spokesman of the NPA’s Crucifino Uballas Command, even called the arriving soldiers “blind” because they don’t have any knowledge of the area where the NPAs freely move.

“They are not from here,” he said. “They are blind. All they can expect are more tactical offensives, more punitive actions and more strike operations from us,” Guinto said during the release of three soldiers and a militiaman that the NPAs held captive for 34 days.

He said the NPAs are not worried at all about the “hyped” entry of two more battalion of government troops from Luzon, especially those coming from the former unit of retired General Jovito Palparan.

Guinto said the NPA guerillas are aware that 500-700 troops have been deployed in the region to pursue them. The arriving soldiers brought to 13 the total number of battalions concentrating in the Davao region alone. 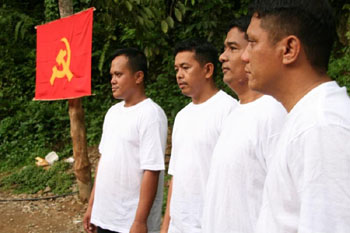 In the face of mounting rescue operations of the Philippine Army, communist rebels freed on June 15 the three soldiers and a militia member held as “prisoners of war” since May 12.

The NPA prisoners were released in Sitio Lim-ao, Teresa, an upland mining village of Maco town of Compostela Valley, just an hour’s ride from the adjacent town of Mawab where the four were captured. Guinto said the release site is just two villages away from the nearest military detachment.

“The fact that we released them right here says that we never left our base,” Guinto said. “The capture (of their men) should already be a big slap on their faces.” 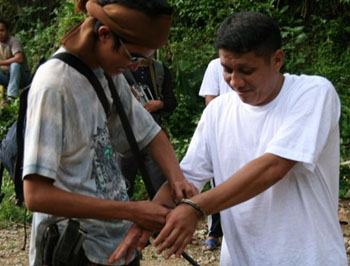 He added the four captives were released on humanitarian grounds. The NPAs listened to the appeals of the family despite the probable cause for their further detention, he explained.

The NPA spokesman said they arrested the four to “defend their territory” and “exercise political authority within the guerilla base.”

He said the military detachments the three army personnel kept were put up precisely to destroy the NPA guerilla base. “Arresting them was a matter of defending the guerilla base,” Guinto said. He added that the military personnel also committed offense considered “serious” by the “revolutionary government.”

The Barangay Limbo detachment, which Bawagan headed, served as the combat support unit of the 2nd Scout Ranger Battalion during a military operation in February this year, Guinto said. He said a whole family was driven out of the place after soldiers took away their things and burned down their house. He was referring to a certain family named Geronimo, whose son, Roderick Geronimo, was also beaten by soldiers.

Alcala also led a detachment in the village of Anitapan in Mabini town. Guinto said that aside from threatening civilians and firing indiscriminately when they get drunk, soldiers also steal farm animals from the village for their pulutan. Guinto also said the NPAs received reports that the detachment allegedly has been a “source of illegal drugs.”

“These had been reported to us,” Guinto said. “As a matter of exercising the political authority of the people’s democratic government, we had to arrest them and investigate.”

But he said the release of the prisoners will not clear them of the charges. “We’re only asking them to reform, otherwise, we’ll have to do what we need to do,” Guinto said.

NPA guerillas captured the four soldiers at the residence of Corporal Bawagan in Barangay Sawangan in Mawab during the birthday party of Bawagan’s three-year-old son.