Pascual Guevarra and the Struggle for Land

MANILA — The death of 78-year-old farmer Pascual Guevarra is not a result of a personal feud but of a long struggle for land.

Guevarra was shot dead inside his house by a lone gunman in barangay San Isidro, Laur, Nueva Ecija, around 4:30 p.m., July 9. The killer whisked away with a male companion on board a black motorcycle without a license plate. They headed north.

Guevarra was preparing the evening meal at the kitchen located at the back of the house when a man in his mid to late 30s, fair skinned, 5’5” in height, medium built, wearing a light blue shirt, denim pants and a hat quickly walked towards him and pulled a handgun tucked in his waist.

The shots were heard by Ronnel Villoria, the victim’s grandson who was tying their carabao in the yard. He immediately rushed inside the house and saw the assailant standing over his wounded grandfather. Ronnel grabbed the assailant from behind and tried to wrest away the gun. He continued to struggle with the gunman until the latter broke free and shot Ronnel in the shoulder. The gunman hurriedly ran outside. 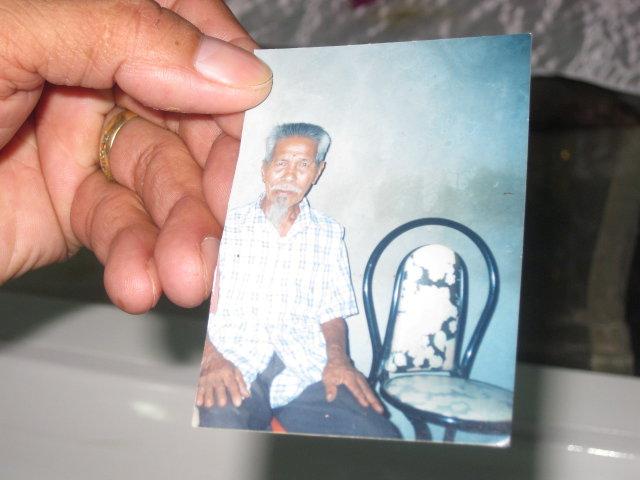 Guevarra’s daughter Lilibeth, who also witnessed the shooting, brought his father to a hospital in the nearby town of Bongabon but he was pronounced dead on arrival. Lilibeth’s four-year-old son Jebhet Prince also saw how his grandfather was killed.

In an interview with Bulatlat, Lita Mariano, spokesperson of Amihan, said that Guevarra was under surveillance for almost one month.

Amihan is an organization of peasant women and a member of the fact-finding team organized by the Alyansa ng Magbubukid sa Gitnang Luson (AMGL), an affiliate of Kilusang Magbubukid ng Pilipinas (KMP).

Mariano said that Guevarra’s relatives said that two men frequented their house, one pretended to be a buyer of used-bottles and the other an icedrop vendor. Both men, whose faces were always covered, stopped going to their place a week before the shooting.

Lilbeth also noticed, on two occasions, a black Hyundai Starex van with red license plate (government owned) passed slowly by their house. She first noticed it at 4:00 p.m. the day before the shooting. The same vehicle went back in the morning of the shooting while they were conducting a bible study.

On July 5, while Guevarra and other farmers were at the Department of Agriculture Region 3 office, Byrone dela Cruz of the Department of Public Works and Highways (DPWH) District 3 of Nueva Ecija went to see him at his house. He found Lilibeth instead who told him where her father was. Dela Cruz left a message for Tatay Pascual that the farmers affected by the DPWH projects would now be paid. He also told Lilibeth that he was coming back on Friday, July 9 and specifically told Lilibeth to tell her father not to leave the house on the said date. He also asked where Lilibeth’s husband was and took both of their mobile phone numbers, then left. Dela Cruz never came back on the day he said he would.

Not a Mere Land Dispute

In its spot report, the local police of Laur said that the motive behind the killing is a mere land dispute. The police, however, did not identify any suspect.

Lilibeth told the fact-finding team that the family strongly believes that the military, particularly the 7th Infantry Division (ID) of the Philippine Army, was behind the killing.

Mariano said Guevarra had always been at the forefront of the struggle for the 3,100 hectare land located inside the Fort Magsaysay Military Reservation (FMMR), home of the 7th ID.

“It is clear that Tatay Pascual’s death is not due to a personal feud,” Mariano said, reacting to President Benigno S. Aquino III’s recent statement that the recent cases of extrajudicial killings are due to personal grudges. “It is the struggle for land,” she said.