“It is a challenge to the Aquino administration to address the housing question holistically, beyond the low-cost housing projects peddled as the flagship program of the government,” GWP Rep. Emmi de Jesus says.

MANILA — “Better to live here in a danger zone than move to a death zone,” a resident of a condemned tenement housing in Vitas, Tondo, told a housing consultation last week. Approximately 2,000 families continue to live in the condemned tenement in Vitas as residents defy the government’s efforts to evict them. The resident said they have nowhere else to go.

“We don’t want to live in danger, but here at least we are near our sources of livelihood,” another elderly resident said before various groups of urban-poor dwellers gathered by the Gabriela Women’s Partylist (GWP) last week. “Although the government tells us our tenement is already in danger of collapsing, the government has not done anything about alternative housing or relocation.”

Urban-poor dwellers in Batasan Hills in Quezon City also decried the lack of consultation and relocation of the affected households as the government proceeds with the construction of new alleys and roads in their area.

”We are not against it, but we hope the government would be more sensitive to our fellow urban poor in making us vacate the area that will be hit by new roads or alleys,” a woman said in the same consultation.

She added that she hoped there is relocation for the affected residents, noting that new entrants to their communities seem to be allowed while the longtime residents who had been dislocated by road construction were not being provided relocation near or within the community. 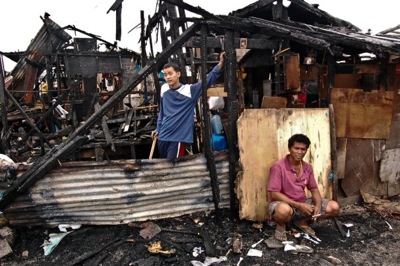 Residents of Baseco, in Tondo, lost their homes to a fire. Filipinos like them are in need of urgent housing. (Photo by Emil Mercado of Tudla Productions / bulatlat.com)

“I hope that the incoming HUDCC chairman Jojo Binay will avoid the pitfalls of his predecessor, former Vice-President Noli de Castro,” de Jesus said. She added that de Castro had been implicated in a series of controversies while he was chairman of the Housing and Urban Development Coordinating Council (HUDCC).

After a day of listening to the plight and appeals of urban-poor residents, de Jesus urged Binay “to make use of his new position in crafting a responsive housing policy.”

Shelter as a Human Right

“We urge the new HUDCC chairman to assert that shelter is a right of every Filipino family. With the current minimum wage remaining inadequate while the cost of living continues to soar, this right has steadily become obscure and unattainable,” de Jesus said.

This year, HUDCC reported that over 2.5 million women and their children were counted among those with unmet housing needs in various parts of the country, especially Metro Manila, Central Luzon and Southern Tagalog. “This makes it imperative for GWP to bring the housing issue to the halls of Congress,” de Jesus said.

In a research, the nongovernment Center for Women’s Resources (CWR) noted that the country requires 3.75 million housing units in 2010, half a million of which in Metro Manila alone. Total housing requirements showed an increase of 100 million from last year.

The regions of Southern Tagalog, Metro Manila and Central Luzon top the HUDCC’s own list of Philippine regions with the most housing backlogs.

Also, it would take about 10 years and P30 billion to relocate half a million squatter families and 75,000 families living in “danger zones,” the Metro Manila Inter-Agency Committee on Informal Settlers estimated last October, after the devastating typhoons Ondoy and Pepeng. The two typhoons wrecked a total of 212,918 houses, the bulk of which were in Southern Tagalog and Metro Manila.

Up to now, CWR noted that the victims of Ondoy and Pepeng are still suffering from the typhoons’ devastating aftermath. “Despite the government’s unpreparedness to cope with the disaster and its effects, which victimized the urban poor more, it has also blamed the urban-poor living in ‘danger zones’ for the widespread flooding,” the CWR said.

The two typhoons did not just destroy the shanties of the urban poor, it also demolished them from their former areas as the government barred them from going back. “In place of 65,521 destroyed houses in Metro Manila, the government only managed to provide 1,400 housing units in relocation areas,” CWR said. It added that the pitifully few families given these relocation may not also be better off, as they were brought to areas far from their sources of livelihood, with little or no basic services such as water, electricity and mass transport.

“It is a challenge to the government to provide stable jobs and livelihood that will help families sustain a dignified life. It is also a challenge for the new HUDCC chair and Binay to address the housing question holistically and beyond the low-cost housing projects peddled as the flagship program of the government,” de Jesus said.

She said GWP will sustain its efforts to push the government to respond to the people’s basic right to shelter. She hoped it would be one of the top priorities of this new administration. (Bulatlat.com)