MANILA — While protesters were holding a program a few steps away from the Ever Gotesco Mall along Commonwealth Avenue, Dina Erene, 42, and Roselle Tupas, 35, were busy sweeping the garbage along the road.

Both women admitted that they voted for President Benigno S. Aquino III. “There might be progress,” Dina, a mother of six, said in Filipino. Her husband is an air-conditioning technician without a regular job. Even though the two of them are working, Dina said, sending all their children to school is not easy. The same goes for Roselle who has four children and whose husband is a worker at an upholstery shop. “Life is difficult,” she said.

As street sweepers of the Metro Manila Development Authority (MMDA), they earn P251 ($5.44) a day, way below the minimum wage set in the National Capital Region. Both have been employed since October 2009 and their contract is renewed every five months. “We want regular jobs,” Dina said when asked about what President Benigno Aquino III should prioritize.

Although ordinary citizens differ on how they view Aquino, all agree that Aquino should combat poverty and find ways to provide gainful livelihood for Filipinos.

Jake Cabiles, 25, an ice cream vendor, hopes that this day would give him an extra income more than usual. He, too, also voted for Aquino. “I voted for him because of his promise of change,” he told Bulatlat. “He should be ashamed if he would not fulfill his promises,” he added.

Jake admitted he voted for Aquino because he despised former president Gloria Macapagal-Arroyo so much.

“He told us that we are his boss. I tell him now that he should help the poor,” Jake, a father of a two-year-old son, said. He earns P300 ($6.50) a day from selling ice cream and his meager income does not suffice for their needs.

Marc Christian Solana, 18, a freshman at the Technological Institute of the Philippines (TIP)-Cubao campus, said Aquino should address poverty. “If there is progress here, Filipinos need not work abroad,” Marc, son of an overseas Filipino worker in Saudi Arabia, said.

“My father told us that if there were decent jobs here, he would have not left the country,” Marc, who has three siblings, said.

In his first State of the Nation Address (Sona), Aquino did not talk about how he would provide decent and regular employment but only spoke of “public-private partnerships” that would help finance much-needed social services.

Marc joined his schoolmates at the protest rally. “I hate dynasties,” he told Bulatlat. “As a senator, Noynoy [Aquino] was not able to enact many laws. What could he achieve as president?” 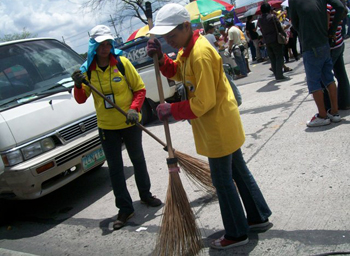 Marizz and her classmate Bernadette have no faith in Aquino. “I do not believe in his promises. All the previous administrations said the same things,” Marizz said.

“Same old lines,” Bernadette said. “He won because of his mother. He would not be popular if not for his mother.”

Emil Kasmot, a fresh graduate from the Polytechnic University of the Philippines (PUP), does not believe that there would be any change. Emil considers as a bad sign that Aquino “used his mother” to win the elections.

Freddie Bagunas, 56, jobless, said Aquino should provide decent housing for the poor. Freddie lives in an urban poor community in South Triangle, Quezon City, which is being threatened to be demolished.

Ronald Adraneda, 36, a non-teaching personnel at the Project 3 Elementary School in Quezon City, said Aquino should increase the salary of government employees.

Rey Cruz, a vendor, hopes that Aquino would veer away from Arroyo’s economic policies. “Those who were involved in anomalies such as the NBN-ZTE should be brought to justice,” he said.

Joel Ullegue, 30, an electrician at Ever Gotesco mall, said he does not also believe Aquino’s promises. “If he says it would rain the whole year, I would have believed him,” he said as he let out a sarcastic laugh. 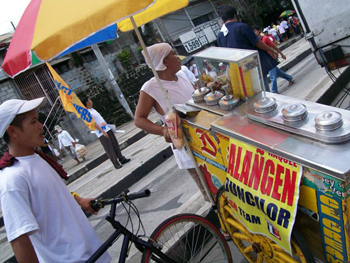 Jake Cabiles, an ice-cream vendor, says Noynoy Aquino should be ashamed if he did not make good on his promises. (Photo by Ronalyn V. Olea / bulatlat.com)

Steve Mendoza, president of the Philsteel Corporation union, also did not vote for Aquino because “his mother did nothing for the workers’ benefits.”

Steve said Aquino should give back the P10-million ($216 thousand) campaign donation of Abeto Uy, chairman of Philsteel Corporation. He said the management wants a two-year moratorium on wage increases.

“It is clear that Aquino would not serve the people,” Steve said, underscoring how Aquino is supported by “big capitalists.”

Elmon David, an urban poor who is also jobless, said Aquino’s proposed solutions are “like a pain reliever that does not give remedy to the real problems of the nation.”

“He should address the root causes of the armed conflict. In essence, he would just continue Arroyo’s policies. The Philippine government has always been controlled by the US government,” Elmon said. (Bulatlat.com)