Related story: Truth Commissions, a Failure in the Country, Successful in Other Countries

MANILA – The long-awaited Truth Commission to be formed by President Benigno S. Aquino III through Executive Order No. 1, which he signed last July 30, proves to be a disappointment for many groups as the body will only focus on the corruption cases of the previous Gloria Macapagal-Arroyo administration.

Bagong Alyansang Makabayan (Bayan) and human rights group Karapatan criticized Aquino’s executive order no. 1 (EO No. 1) for its limited mandate, which does not include investigation of human-rights abuses under the Arroyo regime.

Meanwhile, in a statement sent through email, the Communist Party of the Philippines (CPP) said Aquino’s Truth Commission “is a toothless, single-target, slow-moving animal that may ultimately fail to catch up with Gloria Macapagal-Arroyo and her pack of criminal cohorts.”

“The two and a half year timetable gives much time for Arroyo to come up with the necessary political, legal and extra-legal counter maneuvers to dodge criminal prosecution,” the CPP said. The commission has until December 31, 2012 to complete its mandate.

The CPP pointed out that there are built-in legal and judicial loopholes in the Truth Commission that “may even serve as Arroyo’s way out.”

Human Rights Should Be Included

Bayan said Aquino’s Truth Commission should include violations of human rights because these, according to the group, have often been committed to stop all opposition to the government’s corrupt activities as well as its other crimes against the people. By stifling all dissent, corrupt leaders hope to remove all obstacles to their nefarious schemes, Bayan said. 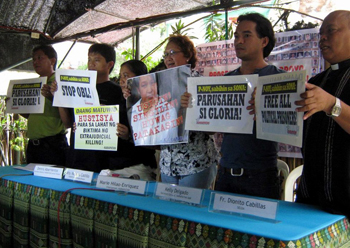 Human-rights groups urge Pres. Noynoy Aquino and the Truth Commisssion to not only investigate reports of graft and corruption but also the human-rights abuses under the Arroyo regime. (Photo courtesy of Karapatan / bulatlat.com)

“How many times did the Arroyo regime, for instance, commit human rights violations to silence whistleblowers like Marlene Esperat and Jun Lozada?” Bayan asked.

Marie Hilao-Enriquez, chairwoman of Karapatan said by excluding the Arroyo administration’s gross human rights violations in the investigation to be conducted by the Truth Commission, Aquino is ignoring the thousands of victims of extrajudicial killings, enforced disappearance, torture and other violations brought about by the previous regime’s counter-insurgency plan Oplan Bantay Laya.

Section 1 of the EO states that the commission should ensure that the “full measure of justice shall be served.”

“Full measure of justice cannot be served without including the violations of human rights, it’s only one third,” Bayan Muna Rep. Neri Javier Colmenares said.

Section 9 of EO No. 1 states that failure to appear by any government official or personnel who would be invited by the commission shall be subject to administrative disciplinary action. But Colmenares said there is no clear disciplinary action prescribed in the EO.

“The Commission of Human Rights has contempt powers, the Presidential Anti-Graft Commission can suspend a government official for 90 days, but this Truth Commission doesn’t have that,” he pointed out.