You Are Here: Home → 2010 → August → 20 → SC Justices Demolish Cojuangco-Aquinos’ Justifications for Giving Farmers ‘Pieces of Paper’ Instead of Land

Highlights in Wednesday’s oral arguments at the Supreme Court: Why farmers’ shares of stocks were diluted, why new workers who were not party to the SDO in 1989 were given new shares, why shares were distributed within 15 years and not within three years as the law required, why the estate should not have been fragmented, why PARC’s revocation order is not a violation of the Bill of Rights, and why HLI’s failure to get DAR’s “compliance certificate” could put SDO in trouble.

MANILA — The first Supreme Court hearing on the fate of land reform in Hacienda Luisita has exposed some details of the Cojuangco-Aquinos’ effort to keep control of the sugar plantation. And even as the high court has just begun hearing arguments on the legality of the stock distribution option (SDO) in lieu of actual land distribution, lawyers for Hacienda Luisita Inc. have already asked the court to approve the company’s new compromise agreement, which is premised on the SDO in question.

Associate Justice Jose Perez said the compromise agreement “assumes that the SDO is valid,” which ties up with the HLI lawyers’ repeated claims that the Presidential Agrarian Reform Council (PARC) does not have authority to revoke the SDO. “I see that your point is that the SDO is already beyond question,” Perez told HLI’s lawyer during one of the exchanges on Wednesday. “But the issue of its validity is why we are here.”

While a few of the justices asked some “clarifications” about the compromise agreement HLI signed on Aug. 6 with supposed representatives of the farm workers, the rest of the justices focused their questioning on the mechanics of the SDO as an alternative to land distribution and as it was actually implemented in Luisita. They also tackled the issue of how or who can revoke the SDO.

After the more than five-hour hearing, the questions posed by the justices seemed to have plowed a fertile ground for revoking the SDO agreement signed in Luisita 21 years ago. Such revocation could result in actual land distribution but, this early, even the justices acknowledged that how much of the 6,000-plus-hectare hacienda remains as “agricultural lands” is another thorny question. 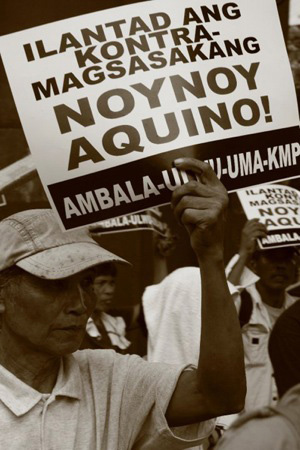 Following a lengthy discussion on how Luisita farm workers were assigned their shares, Associate Justice Presbitero Velasco told the HLI lawyer, Gener Asuncion, that HLI has “treated them more as farm workers than shareholders.”

The farm workers-beneficiaries are viewed as workers, which is why stocks are based on man-days, or the number of days they actually worked in the hacienda, concluded Velasco, who has been credited as the most knowledgeable among the justices on land reform.

Under the SDO implemented in Luisita, “farmworkers become entitled to shares after certain number of days worked” per year, explained Asuncion. Velasco countered that this man-day-based computation of stocks for distribution in lieu of actual land is “unique.” In fact, he added, “it is not really sanctioned or provided in CARP,” the Comprehensive Agrarian Reform Program.

Section 31 of CARP, which supposedly provides the legal mooring to the SDO, “does not contain provisions that shares must be based on number of days worked,” Velasco pointed out. “Why not just distribute (shares) to farm workers?” he asked the HLI lawyers.

To the oft-repeated Cojuangco-Aquino claim that there were no tenants in Hacienda Luisita hence the clan could not distribute the land, Velasco said the farm workers or tillers of the hacienda — particularly those who were working the lands at the inception of the SDO and recognized by the HLI itself as “beneficiaries” — are “tenants” in the eyes of the court and the DAR.