MANILA — Upon learning what happened in the bloody ending of the August 23 hostage crisis, there is only one thing that Benedicta Tee, 60, was worried about – the welfare of her sister, an overseas Filipino worker in Hongkong.

Tee feared that her sister, Soledad Pillas, 52, might be sent home to the country by her employer, a Hongkong national, simply because she is a Filipino. “She is our breadwinner in the family. She supports the medical needs of my younger brother who is ill.”

Pillas managed to send a text message to her sister that she is fine. But added that, “most of the Hongkong nationals were really angry on how the hostage crisis ended on Monday.”

Former Police Senior Inspector Rolando Mendoza held Hongkong tourists and some Filipinos as hostages. He was demanding that the Office of Ombudsman to take action on his pending case, which relieved him from service. The 12-hour hostage, however, left eight Hongkong tourists dead.

The bloody ending of the hostage crisis was later on blamed on how the Philippine government poorly managed the situation and eventually to the media, who was giving blow-by-blow accounts of what was happening at that time. 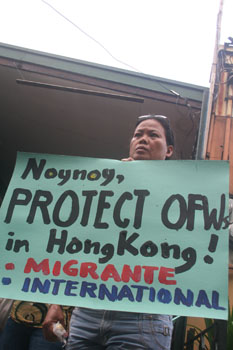 Migrante International demands the Philippine government’s hand in protecting OFWs in Hongkong from possible backlashes because of the tragic hostage taking on Monday (Photo by Janess Ann J. Ellao / bulatlat.com)

Migrante International chairperson Garry Martinez told Bulatlat that he is not surprised if there are negative reactions coming from Hongkong nationals and its possible repercussions to OFWs. “We express our sincerest condolences to the families and friends of the victims,” Martinez said, “We know how difficult it is to fetch a loved one who is dead.”

But Martinez said that OFWs should not suffer the consequences of President Benigno Aquino III’s administration’s first “major, major blunder.”

Gabriela Rep. Luz Ilagan said that the Aquino government should brace itself for the possible repercussions of the bus hostage. “A backlash is inevitable. The Philippine government should also be prepared to have more local jobs ready should domestic workers in Hongkong find themselves being sent home by their employers,” she said in a statement.

Ilagan said that Finance Secretary Cesar Purisma should not downplay the effects of the hostage taking in the economy. “The finance chief should be reminded that unfortunately, the country’s income relies largely on the remittances of migrant workers and on tourism.” 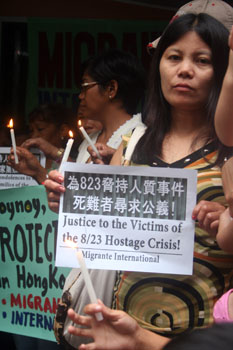 Kins of OFWs light a candle to show their sympathy and condolences to the victims of the hostage taking. (Photo by Janess Ann J. Ellao / bulatlat.com)

There are more than 150,000 Filipino migrant workers in Hongkong. Most of them are working as domestic helpers.

The employer, who happened to be a Hongkong police, told the Filipino domestic helper that while they are not perfect, no hostage crisis would ever reach the situation that the Filipinos got themselves into.

“They (Filipinos) are called either inefficient or killers [in public],” Martinez said. Filipinos are also being stared at from head to toe, making them feel belittled because of their nationality. He said that this is a big blow to the morale of OFWs, not only in Hongkong but all over the globe, because “once you are working outside the country, the only thing that keeps your spirit high is the fact that you are a Filipino.

Martinez said that the Philippine government should ensure that the rights and welfare of OFWs in Hongkong are not jeopardized. “OFWs in Hongkong and elsewhere should not be in any way obliged to defend what was clearly an unorganized and incompetent handling of the hostage crisis.

In an interview, Martinez said that the hostage taking reflects the kind of justice system that runs in the Philippines. “I am not justifying what Mendoza did but this will not happen if only his case in the Office of the Ombudsman was reviewed in the soonest possible time.”

He added that this only proves that the Philippine’s criminal justice system needs to be reformed. “How many other Filipinos would have to do the same thing for justice to be served?”

On the other hand, the Filipino community in Hongkong have expressed their condolences to the victims of the bus hostage taking crisis. In a joint statement, the United Filipinos in Hongkong, Filipino Migrant Workers Union, Gabriela-Hongkong, and the Bagong Alyansang Makabayan-Hongkong said that the rescue operation shows the “apparent ineptitude, lack of coordination and inability of Philippine law enforcement officers and public officials to secure the safety of the victims.”

“In this tragedy, we call for accountability and responsibility to be determined. These should be owned up and commensurate actions should be taken,” the groups said, adding that the Philippine government owes the explanations to the victims, to the people of Hongkong and to the Filipino people.

They also criticized the some of Aquino’s statement immediately after the incident for lacking sensitivity and sensibility. “Extending condolences and sympathies to the victims as well as promising investigation should have been enough then,” they said.