MANILA — The US government has blood in its hands, the newly published book by Ibon Foundation reveals.

No less than United Nations special rapporteur on extrajudicial, summary or arbitrary executions Philip Alston affirmed what human rights group Karapatan has been saying all along – that the spate of extrajudicial killings is sanctioned by the OBL. Alston who visited the country in February 2007 blamed the Arroyo government’s COIN program for the killings. 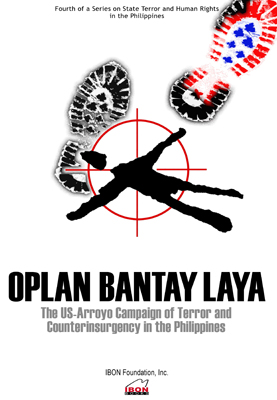 The OBL’s core principle does not distinguish civilians from combatants. In crushing what the military calls “political infrastructures” of the Left, leaders and members of people’s organizations and party list groups are targeted for neutralization.

According to Karapatan, Arroyo’s OBL has taken the lives of 1,205 unarmed individuals, mostly activists and members of progressive people’s organizations.

The book Oplan Bantay Laya not only explains why OBL is the most vicious COIN campaign but also puts in proper context the role of the US government in the state’s brutal campaign against the Filipino people.

In her article “Blood Trail: The US’ Active Role in OBL,” Jennifer del Rosario-Malonzo points out that the US is employing the Foreign Internal Defense (FID) approach to the Philippines, one of the five levels of military interventions of the US in its so-called client states.

The FID is the next most intrusive form of “assistance” next to Direct COIN Intervention, notes Malonzo. According to the US COIN Guide, the FID involves the deployment of teams, often originating from the US Special Operations Command, to support the client government. It differs from civil-military assistance in that it is normally military-led, but still includes very substantial interagency input and support.

US forces, Malonzo says, participate in the AFP’s tactical and combat operations. “US Special Operations Forces are… conducting ‘asymmetrical warfare’ in communities they want to infiltrate by combining intelligence gathering, civic action and public relations, infrastructure projects and psychological operations for COIN.