The newly-formed alliance RILES called on the public to oppose the MRT, LRT fare hikes, asserting that the trains should be for public service and not for generating profits for businesses.

MANILA — “We’re in a crisis at present; I pray that the government would not increase train fares. We have to be able to recover from the crisis first,” said Aida Florendo, 48, widow of a soldier from the Armed Forces of the Philippines.

Aida was among the Metro Rail Transit commuters who stopped for a while to sign her name to a petition against the proposed hikes in train fares. Aida is not a resident of Metro Manila, she hails from Cotabato. But she still urges the government not to implement fare hikes in MRT as the people are already very burdened with high prices.

“Wages have not been increased,” a 20-year old office employee, Ramil Portugal, said. “That’s why we hope the fares in MRT would not be increased,” he said after signing his name to the petition.

As the month of August came to a close and with it, the self-imposed deadline of the Department of Transportation and Communication (DOTC) to complete its study on rates adjustment, the riding public increased its efforts to oppose the looming fare hike by forming an alliance on the first day of September. 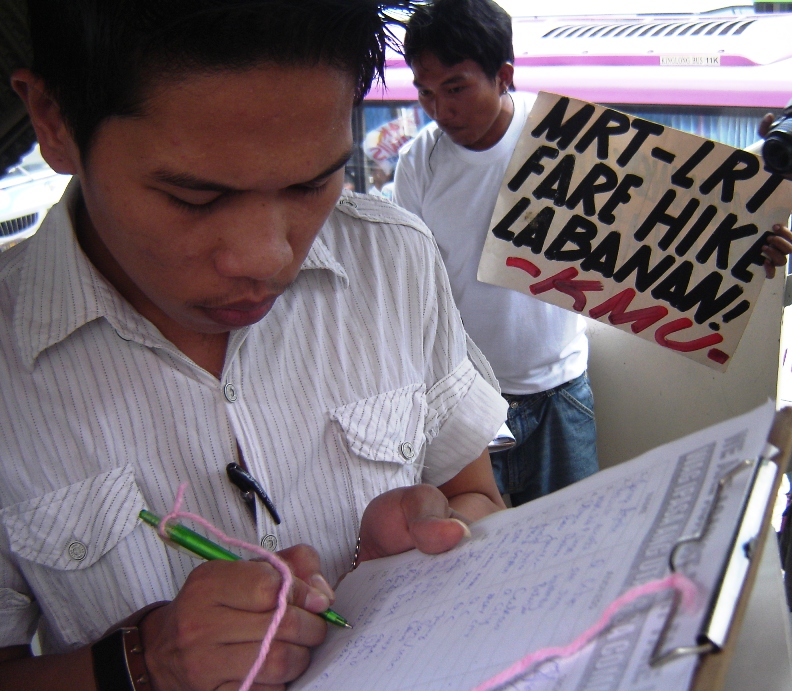 Along with a signature drive in the MRT’s Cubao station, members of KMU (May First Movement) and Anakpawis Partylist protested the Aquino government’s planned fare hikes with the launching of RILES (Riles Laan sa Sambayanan Network).

Prior to the launch of RILES, members of different progressive organizations from KMU, Anakpawis Partylist, Bayan, Kadamay, youth groups Anakbayan and LFS, and women’s group Gabriela, have held signature drives against the planned fare hikes in different stations of the MRT and LRT last month.

Since President Benigno Aquino praised the different modes of privatization in his first SONA last July 26, where he also scored the costly subsidies being shouldered by the government after it took over the MRT from its private developers, his administration has put forward proposals to raise the MRT and LRT fares and slash the government subsidies. 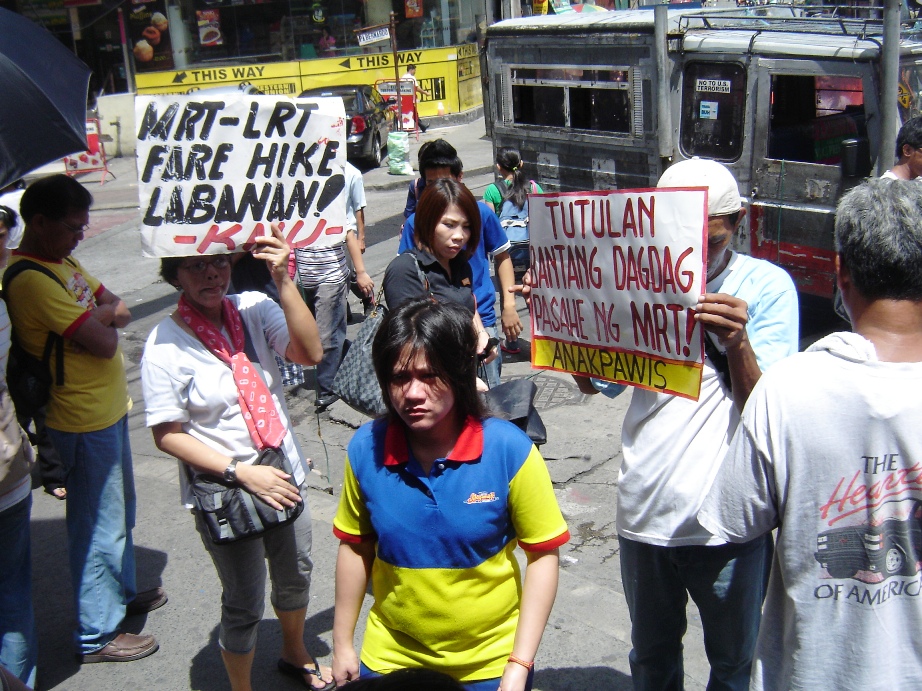 Light Rail Transit Administration (LRTA) head Melquiades Robles reportedly justified their proposed fare hike as needed as they shift to a “users-pay” policy, which, based on the government’s subsequent explanations, meant reducing government subsidies to the mass transit system.

Although the financial books of the LRT and MRT management have not really been studied yet by the DOTC nor opened to the public for scrutiny, President Aquino and the DOTC secretary have already announced that operations of the mass transit systems in Metro Manila at present constitute “a losing venture” and a higher fare is “unavoidable.”

But it appears that the government is “losing” largely because it has guaranteed the return on equity of private developers. In MRT3 for instance, it is the government who “fills the gap between what it generates and what it has to pay” the developers, said the DOTC chief Ping de Jesus.