From the time she began working in ABS-CBN in 1994, when the network took her in after her student practicum there, Hidalgo said she had never taken a vacation or leave of absence, except for one month when she delivered her baby. And that was an unpaid leave. 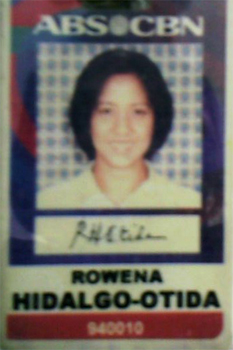 Wheng Hidalgo has been working with the ABS-CBN for 16 years. (Photo by Marya Salamat / bulatlat.com)

Hidalgo seemed very used to working nonstop that as soon as she lost her job, the one and only job she has had since she graduated from college, she suffered a severe gut-wrenching illness that forced her to rush to a hospital emergency room.

A reporter on leave also told Bulatlat that as talents frequently seen on TV, the BIR people who want to tax them more could not seem to understand that they do not earn that much, really.

He said he himself had also visited the offices of Pag-ibig to register as a member, but the employees there directed him instead to the ABS-CBN human resources.

“I have been with ABS-CBN for six years, but my individual application had to be handled by the company liaison to Pag-ibig, who told me that Pag-ibig is only for regular employees.”

Hidalgo and this male reporter told Bulatlat that even if they face the cameras as part of their jobs, they also pay for their own grooming. And when they research their stories, they must pay for their own health insurance.

While reporters may go out of their way for a story, brave bullets, back hoes, floodwaters, slamming doors, hostage-takers, among others, he said they started to receive life insurance from ABS-CBN only recently, and at very small rates at that. Starting this year, the two reporters said the company began insuring the non-regulars for P100,000 ($2,278) and the regular employees for P400,000 ($9,115) .

Considering the positive DOLE decision on her case, Hidalgo was shocked at having lost her job. Her desk editors and immediate superiors had reportedly liked her work, enough to give her assignments and recommend her for regularization. “I cannot understand why…I gave ABS-CBN my service, love, loyalty,” she said. 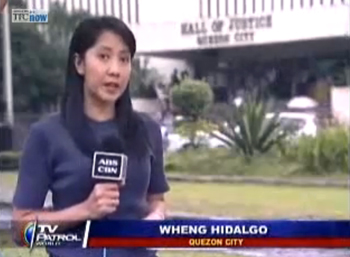 The male reporter who had been with ABS-CBN for six years, said he cannot understand it either. “We have sacrificed many family reunions for shows during holiday seasons, Holy Week; we have lost a lot of sleep over our jobs.”

The two are glad that many progressive party list groups and organizations are taking up the ABS-CBN employees’ cases. “I would push through with the case I filed,” Hidalgo said. She vowed to pursue the implementation of DOLE’s decision on her case.

•“Pressure the ABS-CBN to reinstate without condition all of the 110 ABS CBN employees it illegally dismissed this year;

•Urge ABS-CBN to stop harassing its workers and respect instead its workers’ rights to organize a union; and

•Urge the new administration of President Aquino, the Department of Labor and Employment and all government agencies concerned, to act in favor of ABS CBN employees who are only asserting their rights.”

The youth group Anakbayan, meanwhile, charged that “Gabby Lopez is confident that as a crony of the new President, he would be allowed to carry out his anti-worker schemes with impunity.”

The Lopezes are known supporters of Aquino’s presidential candidacy. The ABS-CBN network has allegedly supported Aquino’s candidacy through biased reporting. A reporter of the network has also been appointed in Aquino’s cabinet.

Anakbayan spokesperson Charisse Bañez dared President Benigno Aquino to publicly condemn the mass dismissals of employees in the ABS-CBN network, “if he truly favors the interest of common Filipinos over his perceived cronies such as the Lopezes of the ABS-CBN.” (Bulatlat.com)