MANILA — Medardo Roda, “Ka Roda” to friends and foes, the tall figure that rallied drivers and operators to the Philippine progressive drivers’ movement from the time PISTON was formed in 1981 to this decade, the well-remembered voice of the marginalized that tirelessly rail at the connivance of the Philippine state and oil cartel against workers and transport drivers, yet sing also of love for one’s country and cracked jokes, passed away on September 5 due to cardiac arrest. 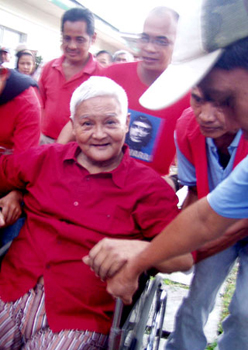 As the pioneering leader and later Chairman Emeritus of PISTON (Pagkakaisa ng mga Samahan ng Tsuper at Operator Nationwide), Ka Roda, as the KMU put it, is unarguably the most famous and most well-loved transport leader this country has ever had. His towering presence, literally and figuratively, in the struggle for just treatment of transport workers and of the marginalized sectors in general, inspires the younger progressive transport leaders and stymies the yellow transport leaders into ignominy by comparison.

PISTON is one of the national federations affiliated with the Kilusang Mayo Uno; it is the organization where Ka Roda mostly concretized his struggle for national freedom and genuine democracy for more than 30 years.

Born on October 27, 1934 to a peasant family in Libmanan, Camarines Sur, the young Medardo, like his fellow children of farmers, started tilling the farm fields to help his parents in between going to school. He attended the Bicol Central Academy where he was a consistent student leader until he finished high school in 1954. 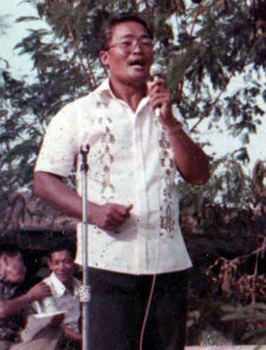 He went to Manila to find work and continue studying. Referred by his brother, he worked for the family of a senator. While working for this family, he took up automotive in 1957 and then continued to work in the car rental business of his employer’s son.

In the latter half of 1960 Medardo Roda quit his job and started driving a taxi. But after being the victim of hold-ups for four times, he quit the taxi for the jeepney in 1978.

Plying the Cubao-V. Luna route, he joined meetings and discussions of transport organizations, where he was soon elected as president of their local association of drivers and operators. In 1980 the KMU was established and it consolidated its “transport committee” which resulted in the founding of PISTON a year later.

Under the sham lifting of martial rule, Ka Roda was elected at first as third vice president of PISTON, but a few months later he started serving as its president.

One of the first campaigns Ka Roda led was the scrapping of PD 1605, which cancelled a driver’s license on his third offense, no matter how small the traffic violation was. Whenever they conducted transport strikes, Ka Roda recalled how mad the Quezon City Mayor’s office was because they were able to paralyze public transport. 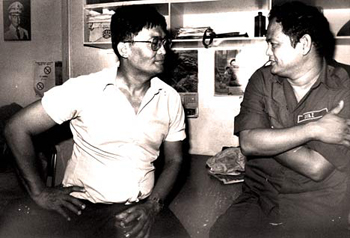 Because Ka Roda was able to rally drivers and operators to conduct protest actions, the late dictator Ferdinand Marcos had him arrested and jailed in 1983, together with other renowned mass leaders of the progressive labor movement. After being released from jail, he continued to lead transport and workers’ strikes, as well as other protest actions against oil price hikes. He was imprisoned twice under the Aquino government in 1988 and 1990.

For his steadfast leadership, Ka Roda earned the love and trust of his fellow drivers and the working people. His down-to-earth explanations of even complex issues, sometimes punctuated with song and dance and jokes onstage, endeared him to many, including journalists such as radio reporters who enjoyed interviewing him on air.

Although an icon and pioneer of the progressive driver’s movement in the country, Ka Roda was respected as a humble leader with a fervent drive to fight for the rights of the marginalized. Despite the seriousness of the issues faced by drivers, Ka Roda was also admired for his dry wit.