“There was never a dull moment when Ka Roda was around,” George San Mateo of Piston said.

He was constantly funny and helpful to comrades and drivers that he led and organized, but in front of government officials during dialogues, Ka Roda was serious and could not be bullied. “Because he was tall and strong-looking and had a forceful voice, he could awe government officials in dialogues,” San Mateo said.

Devoted to the cause of drivers, Ka Roda still attended dialogues and rallies as much as he could even after he had suffered a stroke in 2002 and then in 2003. “Whenever we updated him on the plans and activities of PISTON, he insisted on attending its meetings and activities even if he already had difficulty in walking,” San Mateo said.

Ka Roda is “someone who never saw himself as different from others who look up to him as a leader,” said Modesto Floranda, a friend and comrade of Ka Roda since the late 1980s.

Floranda recalled how a driver once invited Ka Roda to eat at a popular fast food restaurant, but Ka Roda replied: “Why would we eat there? Do you have money? We will eat where you usually eat. You don’t need to treat us to that restaurant.”

“Ka Roda was a leader who refused to be bribed by the government or oil companies. Unlike those so-called leaders of other federations of drivers’ groups such as Fejodap, Pasang Masda and PCDO-Acto, he did not enrich himself in the process. He never accepted anything from the government to stay true to his principles,” Floranda said.

The government had reportedly tried to bribe Ka Roda by offering him a position at the Road Board, a commission managing the road user’s tax. “That’s a subtle form of bribery, but Ka Roda rejected it,” said Steve Ranjo, Piston national president. 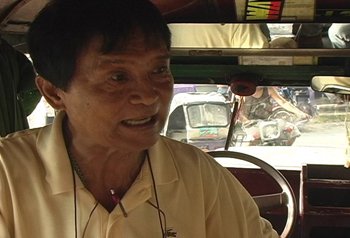 On the eve of every transport strike, Ranjo said, many government officials would desperately contact Ka Roda to ask him to call it off. “The government would ask for a dialogue, but Ka Roda almost always never attended those last-minute dialogues because experience had taught him that during these occasions the government would only bribe transport leaders. Even traffic enforcers respected him for his incorruptibility,” Ranjo said.

“As a driver, he supported his seven children through his own earnings. Whenever an oil price hike loomed, he knew the fear and difficulties of his fellow drivers and their families. He therefore strongly opposed oil price hikes together with other marginalized sectors. His point of view is not limited to the driver’s sector only, but also encompassed that of the whole nation,” said Floranda.

Later in his life, when he was forced to walk with a cane, Ka Roda, as chairman emeritus of Piston, still helped to raise funds for Piston’s national congress. “Through his efforts, he was able to raise 90 percent of the funds spent for our third national congress in April 2007,” San Mateo said. 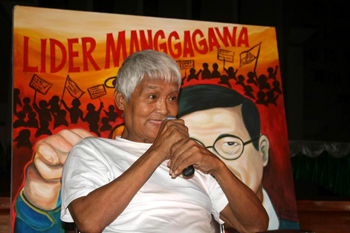 Before he became bed-ridden in August 2007, Ka Roda had been going out of town to facilitate the oath-taking of new PISTON members. He also still attended dialogues with mayors and representative of different district offices of the Land Transportation Office.

“He was indeed a pillar of the Filipino transport workers’ movement,” San Mateo said.

Gerry Roda, 36, youngest son of Ka Roda, is proud of his father. He appreciates their father’s efforts in having sent them to school alongside his active participation in the progressive people’s movement. He described Ka Roda as a patient father. “Very seldom did he lecture his children but whenever he did he was very serious.”

To Gerry, his father was a silent man who often read books and newspapers when at home. “But he would still check on how we were doing.”

Gerry recalled how he had been teased by his classmates, and how he had been ashamed when Ka Roda was apprehended by governments from Marcos to Cory Aquino. “Sometimes, I refrained from mentioning who my father was, admitting it only to my friends when they asked.”

“I was too young then to understand, but now I can say proudly to everyone that he is my father.”

Ka Roda’s life has imparted a shining example for the nationwide transport workers’ movement, in particular, and the progressive labor movement, in general. He leaves behind his wife, seven children and the broad masses of fellow drivers and toiling people who had come to cherish, respect and admire him for what he did and what he represents. (Bulatlat.com)