You Are Here: Home → 2010 → September → 18 → Rights Groups Hold ‘Sympathy Fast’ to Press for Release of All Political Prisoners

There are at least 388 political prisoners in the country, 317 were arrested during the term of President Gloria Macapagal-Arroyo. Under the new administration, activists continue to be slapped with “trumped-up” criminal charges.

MANILA — At least 148 political prisoners in 20 detention centers in the country staged a fast, Sept. 17, to protest their continued incarceration and to pressure President Benigno S. Aquino III to release them.

“Until now we could not understand what crime we have committed to deserve this injustice. Is it a crime to impart health knowledge and skills to community health workers in order to help deprived communities?” the Morong 43 detainees said in a statement released to the media.

The 43 health workers were arrested on Feb. 6 in Morong, Rizal while conducting a health skills training. They were held in military captivity for almost three months before 37 of them were transferred to a police detention facility at Camp Bagong Diwa. They were slapped with charges of illegal possession of firearms and explosives.

“Eight months of detention has caused suffering to our families, relatives, friends and supporters. The communities that we serve are continuously being neglected and are suffering from the lack in basic health care,” they added. 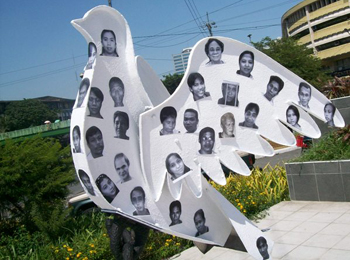 A dove, bearing the faces of the Morong 43, symbolizes the demand for the immediate release of not only the detained health workers but of all political prisoners in various detention centers all over the country. (Photo by Ronalyn V. Olea / bulatlat.com)

“We ask President Benigno “Noynoy” Aquino III to release us and all political prisoners without conditions to concretize his banner pronouncement, during his State of the Nation Address (SONA), that his government would respect human rights,” the Morong 43 said.

In his first SONA, Aquino pledged to tread a straight path.

The political detainees in Camp Crame, including three consultants of the negotiating panel of the National Democratic Front of the Philippines (NDFP), said the fasting also aims to remind the Filipino people of the dark days of martial law 38 years ago.

In a typewritten statement, political prisoners at the National Bilibid Prison in Muntinlupa City said they remain strong and committed despite their incarceration.

The four women political detainees at the Correctional Institution for Women also called for the immediate release of political prisoners, especially the sick and the elderly. They also called for the resumption of peace talks between the Government of the Republic of the Philippines and the NDFP.

“It has been almost one hundred days since President Noynoy Aquino assumed the presidency and yet we haven’t heard a single word from the President regarding the release of political prisoners who were illegally arrested and detained by the previous Arroyo regime,” said Fr. Dionito Cabillas, secretary general of Samahan ng Ex-Detainees Laban sa Detensyon at para sa Amnestiya (Selda).

There are at least 388 political prisoners in the country, 317 were arrested during the term of President Gloria Macapagal-Arroyo. Under the new administration, activists continue to be slapped with “trumped-up” criminal charges.

“The Aquino government boasts of taking the straight path…We challenge him to promote and respect human rights by releasing the Morong 43 and all other political prisoners,” the political detainees in Camp Crame said in a statement in Filipino, noting that Aquino’s father Ninoy Aquino was himself a former political prisoner during the Marcos dictatorship and his mother, Corazon Cojuangco-Aquino released all political prisoners at the start of her term.