“We are condemning the violent dispersal by authorities here and elsewhere,” Bea Arellano of Kalipunan ng Damayang Mahihirap said, “While there are still no decent jobs available for the Filipino people, the government should allow vendors to sell, even on sidewalks, to earn a living.”

MANILA — It seemed like it was just another ordinary day for Lyka Emam, 32 years old and seven months pregnant, when she brought out her salt cart in Kaunlaran Extension, Manggahan-Litex, along Commonwealth Avenue early morning of September 8. Around 6 p.m., however, police officers and a sidewalk clearing operations team of Quezon City came.

“They confiscated my wife’s salt cart. She pleaded with them but a police officer kicked her cart, causing it to bump her stomach,” Panoy Emam, 26, Lyka’s husband, told Bulatlat in Filipino.

Lyka continued pleading with a high-ranking police officer, who, according to the residents of Kaunlaran, is a colonel, but was told that they were still waiting for the orders of a “higher” official. “She went home empty-handed,” Panoy said. 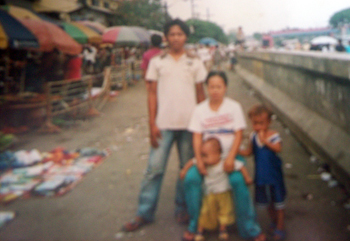 Panoy and Lyka with their two children. Lyka, a vendor in Kaunlaran Extension, Manggahan-Litex, was 7 months pregnant when she died after the violent sidewalk clearing operation and dispersal on Sept. 8. (Photo courtesy of Panoy Emam / bulatlat.com)

Around 11 p.m. that night, Lyka started to complain about pains in her stomach. Panoy and Lyka’s sister Mela Ismael brought her to the Fairview General Hospital. “We were still in the taxi on our way to the hospital when she died,” Panoy said.

“She was urinating blood,” Mela said, “It happened so fast and before we knew it, she died.”

Panoy did not bring Lyka out of the taxi anymore. A doctor went out and declared her clinically dead before they returned to their Muslim community in Kaunlaran. Lyka was buried the following day, in accordance with their Islamic beliefs. She has two children, six and three years old respectively. 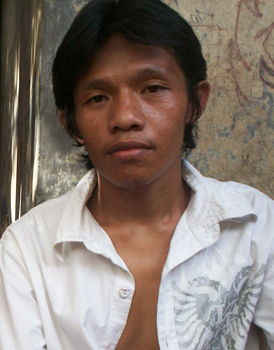 The residents of Kaunlaran Extension are furious because of Lyka’s untimely death. Aminah Mustapha-Lomondot, president of Samahang Muslim-Christian Manininda of Commonwealth, said this would not happen if only the Quezon City government allowed them to legally sell goods along Commonwealth Avenue.

“We have submitted all the requirements,” Lomondot said. Currently, stalls are being constructed just outside their community. The plan is to have it rented to those can afford it. Vendors, on the other hand, are only allowed to sell once a week, every Sunday.

But because most of them have no other means to survive, they sell their  goods even during days that it was not allowed. This results in violent dispersals. Residents said the clearing operations team chase them and confiscate their goods even when they are already inside their community.

“Our goods are not even safe in our own home. They would come and get it if they could,” a resident told Bulatlat.

In fact, last September 9 and 11, the clearing operations team ran after the vendors again. A resident heard one policeman saying that they did not care if the vendors were still mourning for their dead. “There were even members of the Special Weapons and Tactics unit (SWAT) who went with them.” 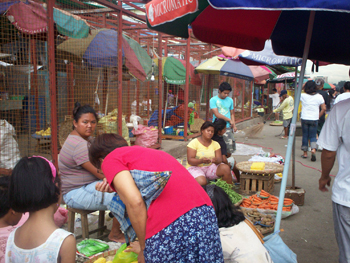 Residents said that the sidewalk clearing operations team would chase them even when they are already inside their community. The red stalls would be rented out to those who can afford it. (Photo by Janess Ann J. Ellao / bulatlat.com)

“They were armed,” another resident said.

“We are condemning the violent dispersal by authorities here and elsewhere,” Bea Arellano of Kalipunan ng Damayang Mahihirap said, “While there are still no decent jobs available for the Filipino people, the government should allow vendors to sell, even on sidewalks, to earn a living.”

Arellano said under the worsening economic crisis in the country, the poorest of the poor, such as the residents of Kaunlaran Extension, are the most vulnerable.

The urban poor leader hopes that a law ensuring the protection of the rights of vendors would be passed as soon as possible. “Unfortunately, laws that are passed ensure the rights and welfare of rich people instead.”

Panoy, on the other hand, called on President Benigno S. Aquino III to help them in obtaining justice for his wife’s death. “We hope that they would not send us away from here because we have nowhere else to go.” (Bulatlat.com)